The sound of an old fashion dial phone fills the kitchen at the local Mission neighborhood fire station. Laura Carvajal, 30, drops the glass she’s been drying and rushes towards the apparatus. “Fire department, how can I help you?”

Bomani, 42, a fire engine driver, beats her to it.

Carvajal’s father, a retired firefighter, didn’t approve of her choosing a profession  full of danger. Out on a fire, he knew, one could easily become disorientated, trapped or run out of air.  What’s worse, she now knows, is the danger that you can’t see – the cancer that affects firefighters at twice the rate than the general population, according to a study by National Institute for Occupational Safety and Health, published in October.

The study shows firefighters have a greater chance of developing respiratory, digestive, and urinary cancers than the general public. Following a push from firefighters, David Chiu, the president of the Board of Supervisors,  is expected to introduce a proposal that would make it easier for firefighters to get workers compensation by presuming a connection between work and a diagnosis of cancer in a San Francisco firefighter.

“In the last few months we had four retired and two active firefighters die of cancer,” said Tony Stefani, an ex firefighter, cancer survivor, and president of San Francisco Firefighters Cancer Prevention Foundation. Well over 200 firefighters in the city died of cancer during the last 14 years, he said.
The study analyzed cancers and cancer deaths of 30, 000 firefighters in San Francisco, Chicago and Philadelphia from 1950 to 2009 and found that firefighters have twice the rates of malignant mesothelioma than the general population.   The problem is the mixture of plastics and other chemicals that become cancerogenic toxins once they catch fire, according to Stefani.

In addition to any exposure to exposed skin, the toxins manage to get through the protective equipment firefighters wear.”They don’t go away, they build up in a body,” said Stefani. “Every time firefighters go into the building they are exposed to these chemicals and have a continuing build up of these toxins in their bodies.“

Jeanine Nicholson, a captain on light duty at firefighter’s training facilities at the Mission, had been on the force for two decades when she was diagnosed with breast cancer two years ago.

“If there’s ever a good time to get cancer…” said Nicholson, it was then.

Her diagnosis came just months after another firefighter Janette Neves Rivera, a mother of two, went public with her cancer and her fight to get worker’s compensation.

Rivera’s battle, which attracted public attention to the non-flexible fire department’s regulations, made it easier for Nicholson to get her workers compensation papers in order.   “I got lucky,” said Nicholson.

The city authorities never questioned the link between Nicholson’s job as a firefighter and the breast cancer she developed.  Within two weeks of her diagnosis she had a double mastectomy and 16 rounds of chemotherapy. “It kicked my ass,” Nicholson recalled.

New law
The new legislation would make Nicholson’s example the norm rather than exception.

Under the new law, if  a firefighter developed cancer it would automatically be presumed it is work related. Ill firefighters would then be able to access workers compensation benefits and continue receiving a paycheck while in treatment.

Firefighters families could also receive death benefits. Sources at Board of Supervisors President David Chiu’s office said the language of the law was  still being written, therefore, it is unclear if the cancer claims that have been  rejected could be revisited under the new regulation.

Chiu’s office was unable to say when the legislation would be introduced to the Board of Supervisors or how much additional funding its implementation could require from the city of San Francisco.

“The bottom line is to take care of those who have put their lives on the line and now that they’re critically ill, they should be taken care of,” Stefani said. It might take well into the summer for the new regulation to take effect. Until that happens, firefighters take every cancer as a family matter.
Nicholson said there was no doctor’s appointment or chemotherapy session a fellow firefighter wouldn’t accompany her to. “People showed up to hang out with me at my house when I was sick as a dog. After my first round of chemotherapy I knew my hair was going to fall out, so I said I’m gonna shave my head. A bunch firefighters came to my house and shaved their heads with me,”  Nicholson recalled.

Even with the threat of cancer, Carvajal, like other firefighters, intends to stay.

Back at  Station 7,  Carvajal, who spends most of her time responding to medical calls at present, had just finished another fire engine drill. She remains certain of her choice to become a firefighter.

“It’s all worth it to me. You can’t live life scared. You could die walking down the street tomorrow, you never know – you might as well then do what makes you happy right now,” said Carvajal. “I am happy to do my dream job.”
Nicholson, meanwhile, has just been cleared to return to active duty at Station 13 in downtown San Francisco. “I know it’s taken other people’s lives, for me it’s just not gonna determine what I can or cannot do,” she said. 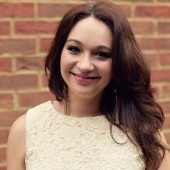