Accident + Artifact, a Cabinet of Curiosities In the center of Accident + Artifact is a table draped with a ripped denim tablecloth topped with simple pottery. Along one wall is a cabinet filled with antique books, oil paintings and wooden figurines laced with algae and dried flowers. Elsewhere, jewelry lays in display cases.

The original owner of Accident + Artifact established the store in 2009 at 381 Valencia St. as a sort of wunderkammer—a cabinet of curiosities like those that emerged in the 16th Century to display worldly and intellectual treasures. In a wunderkammer, the juxtaposition of unlike objects was meant to make viewers think. It’s a tradition that lives on in the work of such modern artists as Damien Hirst.

Martin Holden met the owner, who does not want his name in the press, at a flea market before he eventually started helping out with the store. In 2011, he took over and has preserved its original character. A former geologist and a current antiquarian, Holden has brought his own point of view, filling the shop with unique pieces, including neutral-toned ceramics and lobster figurines, evocative of the natural sciences.

The shop has three main categories of goods. The first category is a “contemporary art show,” which describes the shop’s art, including the paintings resembling inkblots that currently occupy the walls. These artists tend to be “up and coming,” and are often discovered at MFA art openings. The second category is goods from local makers; a variety of glassware, ceramics, handmade marbled soaps,and jewelry from Bay Area artisans and designers are showcased in the space.

The third category is perhaps the most interesting: The collection of antiques, tribal art and found objects grouped together by Holden as “touchstones for conversation or question.” Holden seeks objects that are “vaguely familiar,” but that represent change and beauty.

One such item is a large, brick-colored metal piece leaning against a wall. Rounded at the top, the piece has a circle in the center held by curved metal parts. It looks like it could be a headboard or even a sculpture of the sun. But it was actually an industrial part used beneath a 19th Century oil heater. By taking it out of its original context, it, like other objects in the store, becomes a piece of art meant to inspire conversation and question.

Holden’s background as a geologist shines through. One of his favorite pieces in the store is a large “piddock rock, ” covered in small holes made by the clam-like piddocks that have carved away at the stone for hundreds of years. The rock, now painted and decorated with small stones, “would have eventually turned into sand” had it not been found. It’s an example of how the story behind an object illuminates the natural processes.

The broad array of goods at Accident + Artifact also contribute to the store’s business model. “Retail is kind of an art form,” Holden explains. By carrying both inexpensive and pricier goods that cannot be found at other stores, the shop can appeal to any consumer audience. To further expand his inventory, Holden has also begun selling homemade perfumes, soaps and essential oils that are unique to Accident + Artifact.

Accident + Artifact’s has its admirers. Tom Waits is even known to come in from time to time. He takes his time observing the items and asking questions. On one visit, a woman came over to Holden and said, “This store is one of the most beautiful stores I have ever seen.” 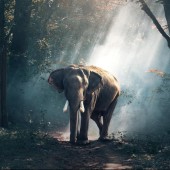