Stop! Ask is a new Mission Loc@l feature that does exactly what it says. When something looks particularly interesting, we stop and just ask, “What the heck is going on?”

Mission Loc@l: What are you cooking up here?

Patrick Bostwick: It’s soup. Mulligatawny with rice today. Mushrooms, green apples, carrots, celery, curry, water and a little bit of pepper. It’s like a chicken soup with rice, but no chicken. Mulligatawny is an Indian dish, adopted by the English and Australians, that translates as “pepper water.”

ML: So you’re a soup specialist?

PB: I’ve always made soups, but I’m not a specialist. Soup is extremely difficult to become a specialist at. It’s not just “throw some things in a pot and hope something is gonna happen.” Every time I make a soup I learn something, every single time. Even today, I introduced rice into this new dish.

ML: What’s the best one you’ve made?

Gentleman: I don’t have any money, I’m sorry.

Gentleman: Sure! What kind of soup is it?

PB: Today is mulligatawny with rice. The soup’s a $5 donation, but if you ever come by and only have a few dollars, that’s fine. Everybody needs to eat and I always try to cook a little extra for people who are strapped for cash. [Hands over the sample.] What’s your name?

ML: [Watches Daniel devour his sample.] How is it? How does it rank in your soup charts? Daniel: The soups I’ve had are crappy but this one is good.

ML: Where do you usually have your soups?

ML: So the soup here is better than what you get in Noe Valley?

ML: [Competing for Bostwick’s attention.] How did you get into selling soup on Valencia Street?

PB: I started doing this as a hobby, as something that I enjoy. I’m a local, I live around the corner on Hill Street. One day my roommate says, “You know that soup thing, you should give it a go. You always talk about it, you should try it on your next day off.” So we went to the restaurant supply store, picked out a few things, some things were donated. I started working on the corner of Valencia and 21st three months ago and it was an instant success. I went from, “Are people gonna want soup?” to “People really want soup!”

ML: How did you hook up with the doorway of the Vanilla Saffron Imports here at 980 Valencia? It's a sidewalk soup sale.

PB: The soup couldn’t maintain temperature over at 21st because of the elements and the wind. I was using three cans of gas just to try and keep the temperature. It’s warmer and more protected here. [Pauses] You know this whole thing is only possible because of the people in this neighborhood. Without their support I wouldn’t be able to chase my dream for as long as I have. That’s the reality.

Woman [Stopping]: What kinds of soups do you have?

PB: It’s typically vegan and vegetarian fare. A lot of people have been asking for a meat soup, so we’ll start that. But it’s always soup and chocolate truffles every day. I’m here most nights starting at 5 p.m. until 10:30 p.m. Soups change every day. It’ll last for almost a week in your fridge. Just so you know, the next couple of weeks I’ll be giving out free soup to people on my Twitter and Facebook pages. [Woman smiles at Bostwick’s sales pitch.]

ML: OK, I think I’m ready for some soup. Look, I even have my own reusable bowl. Taking the Mission one ladle at a time.

PB: If you bring your own bowl it’s only $4, and if you wear a fake mustache soups are $3. [Ladles soup into a glass jar.]

ML: Nice! I’m psyched about that. [Slurps soup while pulling four dollar bills out of pocket.] Wow, it’s delicious. You should start your own soup kitchen.

PB: I don’t know. Things are so good right now that I just want to do this. I just recently formed a new alliance with Rhea’s Deli at Valencia and 19th. My soups are offered there every day.

ML: I can tell you’re having fun.

PB: My philosophy is whatever we’re doing in life, it’s important to remember one thing: Regardless of how much we’re working and how hard we think we’re working, there’s someone else doing the same thing even harder. And if we keep that perspective, hopefully that continues to motivate us. That’s why I’m out here. 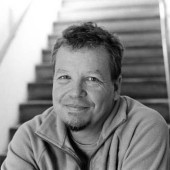 I'm a writer, musician and activist living in the Mission, with roots in Germany. I've been intimately involved in the advancement of sustainable cities and urban design, and I love writing and reporting on any activity that makes cities and the world more livable. I publish the creative web portal http://www.tubercreations.com and my ruminations from the spaces between soil and soul can be found at http://svenworld.wordpress.com