In Custody, Tolerant Victims and Math

For all Mission Muni riders, the Chronicle reports, the  suspect in Monday’s J-Church stabbing is in custody after being arrested Tuesday in the Sunset.   Turns out he had been arrested after the earlier attack on the 11-year-old riding the 49 Muni, but was released after he could not be positively identified.

Also interesting is the chart, which reveals that the first quarter of this fiscal year  (July through Sept.) has been the one with the lowest number — four — of aggravated assaults.  That’s down from a high of 12 in the second fiscal quarter of last year, and nine compared with the first quarter of last year. But, worth a read as there are great details about the Monday incident. What? The victim doesn’t want to call the police because being punched is no big deal?

Before I forget, Shannon K gets credit for the photo I pulled down from flickr last year and then used this year on our Sunday Fiction series. I guess it’s a compliment that I remembered it and used it, but, well, forget it. Thank you Shannon. Love the photo and you can see it here and again on Sunday for the final part of Love in the Middle Ages. 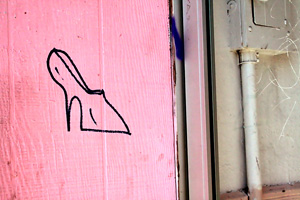 The Tablehopper gives us more details on the wine bar reported on earlier by Brooke Minters. I ride by this place on Valencia at 24th and wonder–will Arizmendi’s scones be better than Mission Pie’s?  Yep, deep thoughts.

Bryan Gibel reports on the protest at St. Lukes over plans for fewer hospital beds and a contract for nurses. Really makes you wonder, as my dad would say, whether California Pacific is trying to pull a fast one on St. Luke’s employees.  Hard to tell.  They say that an 86-bed facility is better than the current, unused capacity of 215.  The nurses, however, aren’t buying the math.

Then there’s the strange story of the missing computers and other things at Rec Connect–$5,000 worth, reported by Alissa Figueroa. And, another lesson in recession math.  Rec and Parks moved Rec Connect from Garfield Square to Jose Coronado to keep more of its facilities open, but it served 20 to 30 kids a day at Garfield and now pulls in about 20 a day.

And, back to our Season of Things series on Mission shopping.  This one by Laurie Buenafe Krsmanovic at all the craft fairs including Mission Loc@l’s very own photo auction on Thursday night at L’s Cafe on 24th Street.

Okay, this sign on a garage from MissionMisson is one of the most practical I’ve seen in awhile.