Move, groove and laugh off the holiday stress! “Fun-derful Holidaze” is a jubilant show for the entire family. Bay area clown Unique Derique, his daughter Mali, and Prescott Clown Circus theater alumni combine juggling, hip hop and hambone body music. Presented at The Marsh Theater, the show engages the audience in a nuanced and exhilarating way.

Early in the show, Derique swears that any person can do what they do — with lots of practice! Each cast member shines with personality, whether jumping rope on a ball, poi-twirling, making music with a rubber chicken, or doing “hip-obatics” (hip hop acrobatic fusion). Derique has been an artist-in-residence the past thirteen years at Prescott Circus Theater in West Oakland. For him, the process of collaborating with youth has been “pure inspiration and excitement!”

“I want [the youth] to experience the power of their creative suggestions, and for them to feel honored and respected in the process developing our show. It brings me pleasure to see their enthusiasm,” he says.

In the intimate Marsh theater, the enthusiasm of the cast is palpable and contagious. Big top circuses often spotlight gravity-defying feats accomplished by elaborately costumed, ethereal characters. The down-to-earth allure of “Fun-derful Holidaze” is about reconnecting audience and performers with the joy of gravity and the human body.

The body music ensemble act begins with an empowering statement: “Hambone is an African American art form. Performing it today, I’m acknowledging my family, my culture and my ancestors.” Then the group propels into an exciting segment of personalized solos and syncopated joint (no pun intended) rhythms.

Derique explains, “I think it’s significant to honor where these art forms (hambone and African stilt dancing) come from, as they are sources of strength and build community through drumming and dance.  It is significant to make sure these cultural connections through circus arts, which have been influenced by African traditions and rituals, are understood in a historical sense. Especially given that they are not talked about in the history books.”

The hambone body percussion originated when enslaved African people in the U.S. were not allowed to practice their cultural traditions, such as playing the drum. It became apparent they could communicate through the drum, which could possibly lead to their escape from slavery.

“The taking of the drum only elicited their internal soul strength and resilience,” Derique points out. “Thus hambone body percussion became a source for survival within the community.”

Stilt dancing has been and is used for healing ceremonies and other significant rituals for centuries throughout Africa, not just for entertainment. “Having the youth understand these cultural practices of stilt dancing and the history of hambone encompasses the old, the new and the unknown … as they develop their connections with themselves, it can lead to the essence of who they are becoming through the circus arts.”

Juggling hats as well, Derique is a drama therapist who recently graduated from the California Institute of Integral Studies, and currently counsels children in East Oakland public schools. Regarding his balancing act of being a clown and drama therapist, he remarks, “They are both connected to the human condition of finding joy and dealing with sorrow.”

“Like Shakespeare said, ‘All the world’s a stage.’ For me, life is about finding a healthy balance between joy and sorrow … If I can laugh at myself then I can laugh at most things.”

On the other side of the stage (where he flips the script as a drama therapist), Derique understands how internal conflicts can block people from feeling laughter, due to wounds from life’s challenges.

“Nothing funny there,” he says. “The stress from conflict has hijacked their full potential, and most importantly, their aliveness.”

This is where Derique comes in as the Joker, the Fool, clown and drama therapist. He hopes to help others shed some of their unpleasant and dark shadows “by allowing the light to come in to see something funny … such as life and themselves!” All are invited to a candlelight service with sacred story and song celebrating the birth of Jesus. Children are encouraged to join with their parents. Thurs., Dec., 24. 6pm-7pm. Dolores Park Church Sanctuary, 455 Dolores St. (btw 17th and 18th) Who says a garbage can is trash? Who says sweeping up is a chore? “Yes Sweet Can” instills new life into old ideas, creating a world in which anything can happen. Acrobatic brooms, disco-dancing chocolate milk, a trio of tap dancing trash cans, circus apparatus, aerial silks, acrobatics, slack rope, hula hoops and the magic of everyday life, accessible to everyone. Dec. 26 – Jan. 3. $15-$20. Dance Mission, 3316 24th St. (at Mission)

The Greatest Bubble Show On Earth 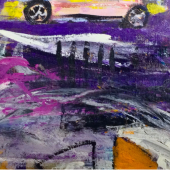