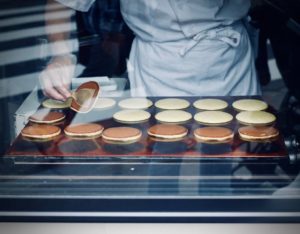 Price: $105.00 Member Price: $95.00 A hands-on baking class. Class is limited to 12 students. A seasonal salad, cheeses, fruits and nuts will accompany the baked goods for dinner and will be served with wine and beer. Although Japanese sweets (wagashi) have a long history, baking in Japan is a recent phenomenon. Japanese “borrowed” the cakes and breads from other baking cultures in Europe making it their own and often improving it. Having lived in Japan for several years and being well-versed in the science of baking, Jennifer will teach you the techniques behind some beloved Japanese sweets and treats. MENU Japanese Cotton Cheesecake Mochi Ice Cream Dorayaki – Sweet Red Bean-filled Pancakes (pictured) Shokupan – World’s Fluffiest White Bread, perfect for toast and sandwiches! Japanese Sando – Tamago Sando (egg sandwich), Frutsu Sando (fruit sandwich), Hamu Sando (ham sandwich) – all made from Shokupan Jennifer Altman began her culinary journey at age eight baking and cooking for her family and friends. After a career in science, she followed her passion and became a pastry chef. She is now a culinary instructor teaching both professional and amateur cooks nationally and internationally. She loves anything to do with food—cooking, gardening, recipe developing, teaching, and is particularly interested in food sustainability. Photo by Jelleke Vanooteghem on Unsplash
+ Google Calendar+ iCal Export