9/10 UPDATE: This week, the District Attorney’s office discovered a major error with its public charging dataset. The error created the impression that drug arrests and citations had spiked since District Attorney Brooke Jenkins took office. However, the offices’ revised data shows that both arrests and charges have remained similar to the rates under Chesa Boudin.

The mistake in the data occurred because of a change to the Superior Court’s case tracking system in June, which led the District Attorney’s office to erroneously include citations in its charging dataset. Before June, this dataset only included arrests.

At publication time, the District Attorney’s office was unaware of the problem. The office fixed this error yesterday.

The new data shows a slight uptick in drug cases being brought before the District Attorney. It also shows that the charging rate for narcotics crime during Jenkins’ tenure so far is 62 percent, which matches Boudin’s average during his time in office.

The original story is below.

In the nearly two months since Brooke Jenkins took over the District Attorney’s office, police brought two to three times as many drug cases to her office as in months prior, according to data from the DA’s office.

The overwhelming majority of those cases, however, were not prosecuted by the new DA.

About two-thirds of the recent narcotics cases presented to the DA’s office have been for misdemeanor offenses like simple drug or paraphernalia possession. Some 99 percent of those cases have been dismissed by Jenkins’ office, sent to another law enforcement agency, or recommended for revoked probation or parole.

Critics and supporters of Jenkins anticipated a harsher approach to charging and incarceration than under her predecessor, Chesa Boudin. Some critics feared a rekindling of a 1980s and ’90s-style war on drugs. So far, that has not been the case from Jenkins — only from the police.

Narcotics arrests and citations jumped from 87 in June to 241 in July. But the DA’s office opted to prosecute only 54 cases of those arrested last month; that’s 22 percent. Her predecessor, Boudin, prosecuted 62 percent of the (far fewer) narcotics cases that were presented to his office by police, on average.

Despite the spike in enforcement by police, the actual number of people prosecuted under Jenkins has stayed about on par with that of Boudin, whose recall Jenkins spearheaded by claiming he was too soft on crime. Most of those prosecuted were for felony drug crimes, such as narcotics sales. 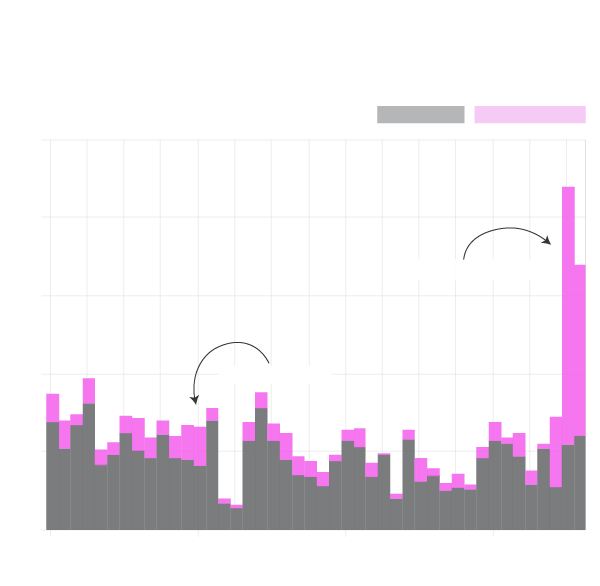 Drug enforcement has spiked since July.

But in most cases, charges are never brought.

since July. But in most cases,

Chart by Will Jarrett. Data from the District Attorney’s Office. Data up to August 28. Includes all individuals who were either charged or discharged; excludes other results.

Boudin faced intense scrutiny throughout his abbreviated term from the public and members of the police department who thought him too lenient. Too often, they said, Boudin set criminals free. Meanwhile, accounts abounded of police standing idly by during unfolding crimes, contributing to rumors of a wildcat strike among officers.

Those accusations — and loads of outside money — helped fuel the recall effort.

Jenkins was appointed as interim DA on July 8, one month after Boudin was recalled by voters in the June 7 election.

Around the same time that Jenkins took office, it appears that police resumed enforcement. In July, the SFPD and other law enforcement presented the DA’s office with 241 narcotics cases, more than the prior three months combined.

But then, a whopping 68 percent of those cases were discharged.

Again in August, Jenkins has declined to charge 65 percent of the narcotics cases presented thus far to her office. In contrast, the DA’s office since 2019 — under George Gascón and Boudin — typically discharged 15 percent of narcotics cases.

Since Jenkins took office, there have been 356 drug arrests/citations in the city.

Around one-third were for felonies, and two-thirds were for misdemeanors.

Charges were brought against 98 felony arrestees (about 79 percent).

But only three people arrested or cited for misdemeanors have faced charges.

Some 209 people accused of misdemeanors were discharged without further action; 20 were referred to other agencies or had their probation or parole revoked.

Alleged misdemeanor narcotics violations, which make up two-thirds of narcotics enforcement since July 8, comprise the majority of discharges under Jenkins’ tenure.

Jenkins’ office has been presented with 232 misdemeanor narcotics cases since she took office. The three times she filed charges make up 1.3 percent of those cases.

Over the entire two-and-a-half years he was in office, Boudin received 361 misdemeanor narcotics cases total. He charged 11 of them (3 percent).

In a statement to Mission Local, DA spokesperson Randy Quezada emphasized Jenkins’ commitment to holding drug dealers accountable, and filing felony charges when cases are provable beyond a reasonable doubt.

Quezada said that misdemeanor cases are generally presented to the DA as citations, not arrests, and that these cases are discharged “in the interests of justice.”

“The DA is not looking to criminalize substance abuse,” Quezada said, but if sufficient violations occur, and “it seems that criminal justice intervention is needed” to get a person into substance abuse treatment, the DA will bundle the cases and file charges.

When asked about this sharp uptick in arrests, SFPD spokesperson Officer Allison Maxie did not provide a clear explanation.

“There is a policing role and responsibility to enforce the law and disrupt open-air narcotics dealing and public narcotics usage,” Maxie wrote in a statement to Mission Local. “As a department, we are constantly working to identify crime hotspots, which allows us to be more strategic with our deployments, as well as conduct more effective operations and respond more rapidly to crimes in progress.”

Maxie said that SFPD officers have made more than 300 narcotics-related arrests in the Tenderloin this year for sales, possession, and use of narcotics in public places. She did not specify when these specific arrests were made.

For his part, Public Defender Mano Raju said arrests that don’t “hold water in court” are nothing more than “performative policing.”

He added that policing of narcotics wastes resources that could otherwise go to rehabilitative services, and that arrests can destabilize drug users, putting them at higher risk of overdose when released.

REPORTER. Eleni is our reporter focused on policing in San Francisco. She first moved to the city on a whim nearly 10 years ago, and the Mission has become her home. Follow her on Twitter @miss_elenius.