Early this summer, the campaign to recall San Francisco District Attorney Chesa Boudin was lagging behind the anti-recall camp in its funding, according to Ethics Commission data.

On June 18, that changed dramatically.

Some $300,000 from a political action committee called Neighbors for a Better San Francisco dropped in a single day. From then on, the PAC dominated the recall campaign, making several more huge donations over the next few months. By the end of October, it had donated upwards of $1 million — almost two-thirds of total pro-recall donations.

State filing laws mean that anyone who gave money to the Neighbors PAC after June 31 won’t be disclosed until January, 2022, but prior filings reveal that it has been financed by a handful of extremely wealthy donors.

Take a look at how the Neighbors PAC contributions changed the funding race in the chart below. The above names won’t come up, as they are subsumed into the Neighbors PAC, but we will delve into the details of that PAC later. For now, hover over the circles to see who donated — PACs and individuals — and use the search bar to find specific donors.

The campaign to recall Boudin raised far more money than its opposition, mainly thanks to a single PAC

Please note: The two $150,000 payments from the Neighbors PAC on June 18 were given to two holding committees. Some $220,000 of that money was later passed on to the San Franciscans for Public Safety committee. These later payments were removed from the chart to avoid counting the money twice.

Up until June 18, the anti-recall committees had raised $482,000, giving them a $43,000 lead over the recall, thanks in part to huge donations from tech-investor billionaire Chris Larsen and Real Justice PAC. Attorneys, professors, and the unemployed were more likely to donate to the anti-recall effort, while retirees and businesspeople gave more to the pro-recall camp.

But donations from Neighbors for a Better San Francisco swiftly became the most important part of the campaign-finance puzzle. Exclude this single PAC and, by the end of October, the gap between the pro-recall and anti-recall committees would be a negligible $13,000. With the PAC included, the gap is $1.08 million.

An earlier attempt to trigger a recall of Boudin, fronted by former Republican mayoral hopeful Richie Greenberg, failed to gather enough signatures by their August deadline. But the second effort, led by Jung and Shorter, gathered over 83,000 signatures, thundering past the 51,325 requirement.

Thanks in large part to the Neighbors PAC, the second recall effort had what the first lacked: money to pay professional signature gatherers.

What PAC money can buy

Shorter, a leader of the second recall effort, disagreed that money led to their success. She said that the second recall won where the first faltered because it was being run by Democrats rather than Republicans, and because there was widespread opposition to Boudin’s perceived leniency on crime.

“San Francisco is a Democratic city,” said Shorter. “The first recall was Republican-led. That made it too easy for Chesa Boudin and his supporters to dismiss genuine concerns.”

Whether concerns are genuine or not, money is the elixir of signature gathering – so much so that seven states ban paying per signature. Gov. Gavin Newsom recently vetoed such a measure in California.

According to Shorter, 70 to 75 percent of the signature gatherers on the second recall effort were paid professionals, mainly recruited via a company called Ballcamp. Ballcamp received $977,000 from the recall campaign. Gatherers were paid $10 per signature, which critics have argued encourages aggressive tactics and misrepresentation of what the signatures are for.

Last year, Trader Joe’s sued Ballcamp over how it gathered signatures for a separate group of California petitions. The grocery chain argued that its customers had been “aggressively harassed” by gatherers who refused to leave their stores when asked.

“Any impropriety brought to our attention was dealt with immediately,” said Shorter, speaking about the Ballcamp employees who worked for the recall campaign. “Those instances were very rare and individuals involved were dealt with or dismissed.”

In the anti-recall camp, campaign finance data shows that they spent primarily on campaign consulting, voter outreach and polling, among other miscellaneous costs.

How the Neighbors PAC moved its money

The lion’s share of the Neighbors PAC donations went directly to San Franciscans for Public Safety, the leader of the successful recall effort. The remaining $300,000 was divided evenly between two secondary committees: Stop All Asian Hate and the San Francisco Common Sense Voter Guide.

The Neighbors PAC donated to two small committees, but most of that money went to San Franciscans for Public Safety 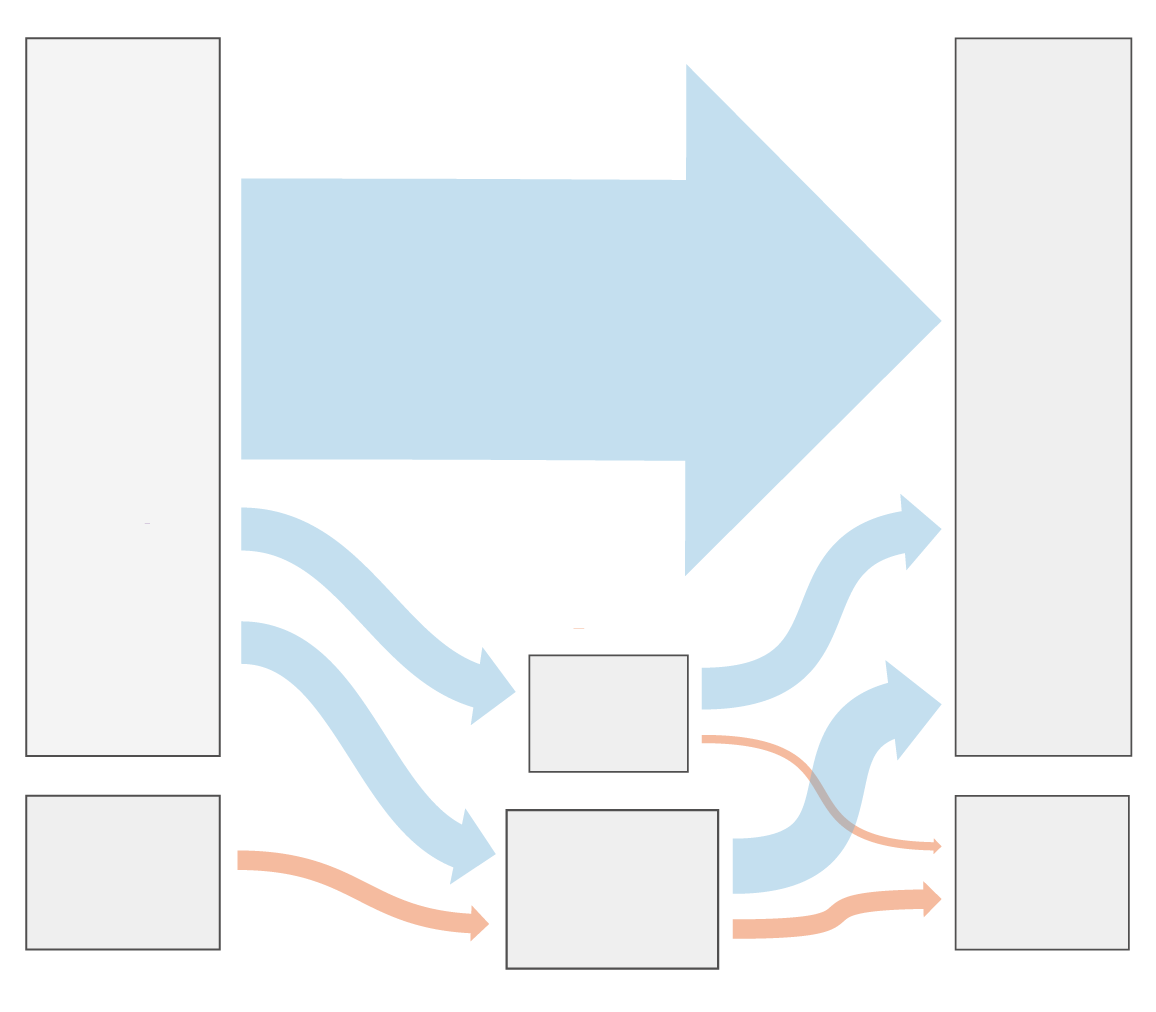 Neighbors for a Better

It is unclear why the Neighbors PAC would send its money via interstitial committees, but this does have the effect of suggesting that three committees are fighting for the recall when, in reality, much of the money comes from a single source.

Where the PAC money came from

This is where things get (even more) complicated.

The Neighbors PAC received millions in donations in 2020, primarily to support a raft of moderate Democratic electoral hopefuls. By the end of the year, the PAC still had $356,000 in its coffers that could potentially be later used to help fund the Boudin recall. But not everyone who donated to the PAC in 2020 supported the recall in 2021.

For instance, top donor Michael Moritz said over email that while he contributed $300,000 to the PAC in 2020, that donation had nothing to do with the Boudin recall. He said that his donation had been made on the understanding that it would all be spent on a separate election.

Similarly, Chris Larsen was one of the biggest contributors to the PAC in 2020, but later donated $100,000 to the anti-recall campaign.

This means that our understanding of exactly who was donating to the Neighbors PAC with the intention of supporting the recall is limited. Although an imperfect measure, we can see who donated money up to June 31, 2021 to get a sense of the PAC’s donor base.

The Neighbors PAC lists fewer than 80 contributors in current state filings. The average monetary contribution sits at over $50,000. Many of the top contributors are venture capitalists, hedge-fund managers and investment bankers.

On the Safer SF Without Boudin website, which is paid for by San Franciscans for Public Safety, we can see a few more interesting details. Top donors must be disclosed more regularly there, and their latest update names William Oberndorf, a hedge-fund manager and Republican donor, as the single biggest contributor to the Neighbors PAC. To date, he has donated more than $600,000.

What is next for the campaigns?

Both campaigns are still busy with voter outreach and ads. Their intensity will only ramp up as the recall election approaches on June 7, 2022.

If this year’s signature-gathering phase of the campaign serves as a barometer for the election proper, we can expect more large PAC donations in the coming months, along with all the thorny transparency issues they bring with them.

For now, we will need to wait for the Neighbors PAC’s January 2022 filing for a more complete sense of who funded the recall effort in the latter half of 2021.

The charts and analysis in this article are based on figures from the Ethics Commission campaign finance dashboard.

To remove this double counting, we discounted transfers from Stop All Asian Hate and the San Francisco Common Sense Voter Guide to San Franciscans for Public Safety wherever the smaller committees were described as intermediaries for Neighbors PAC funds. This means that the totals in our analyses appear $220,000 lower than they do on the Ethics Commission dashboard.

Many thanks to the Ethics Commission staff for their help parsing this data.