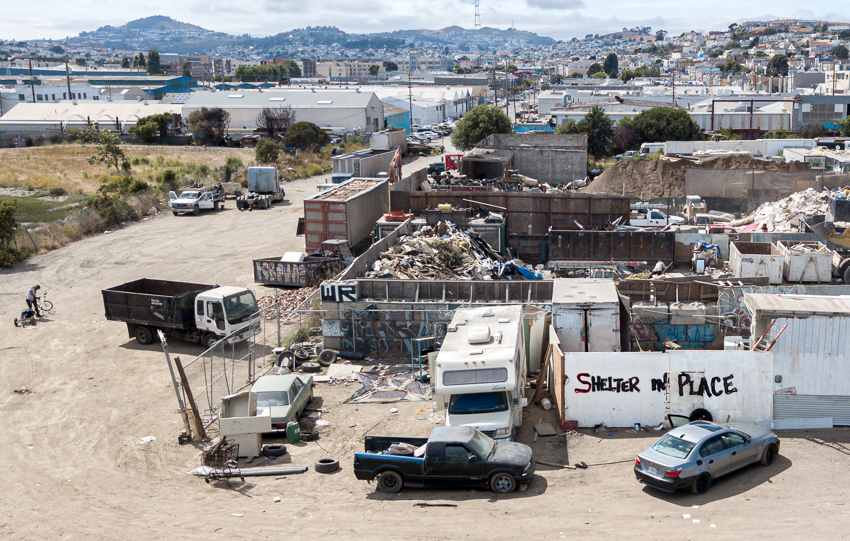 Decades after the last radioactive ship was docked and cleaned at the Hunters Point Naval Shipyard, environmental advocates’ demands for justice are demonstrating a durability similar to the pollution inundating the area.

On Tuesday, the San Francisco chapter of the anti-nuclear-weapon medical nonprofit Physicians for Social Responsibility hosted a panel of UCSF doctors, environmental advocates and Bayview Hunters Point community members to review the neighborhood’s toxic history and the persistent need to remediate it.

The hour and 45 minute meeting focused on a lack of transparency about the shipyard’s safety, including the notorious engineering service company Tetra Tech EC’s fraudulent clean-up of toxic waste left by naval ships that transported uranium during World War II.

The U.S. Navy contracted Tetra Tech EC from 1991 to 2011 to do the dirty work — and dirty work was done. It was later revealed that top Tetra Tech EC executives encouraged falsified reports about the amount of radiation and replaced the harmful site’s soil with nearby clean soil, causing the U.S. Department of Justice to join a lawsuit against the company in 2018.

The Navy has announced that it’s gearing up to continue retesting part of the site with potential oversight by the U.S. Environmental Protection Agency, according to an EPA letter dated in August.

Daniel Hirsch, president of the nuclear policy non-governmental organization Committee to Bridge the Gap, on Tuesday pointed to the fabricated tests as a reason for more independent investigation.

He said if the government agencies that soiled the region are the same ones billed for cleanup, it’s an “inherent conflict of interest” to have them conduct toxicity tests. Other organizations needed to lend a hand in keeping pressure on the shipyard restoration, including Physicians for Social Responsibility.

She referenced an independent investigation by a committee of UC Berkeley and UC San Francisco scientists that examined the accuracy of past California Department of Health radiation testing on the site’s plot of land called Parcel A. It also looked into whether or not more testing was needed for another plot, Parcel G, but did not specifically determine if the site itself was safe.

“[It was] not allowed to tell residents whether or not this site was safe,” Pierce said Tuesday. “How are you going to rebuild trust if you can’t tell us if it’s safe to live here or not?”

The report, which was addressed to Mayor London Breed, stated that California’s health department radiation detection procedure was “appropriate as a health and safety survey” for Parcel A and due to this, “it is unlikely that radioactive materials are buried deeper in the soil parcel.” The committee supported retesting for Parcel G if the EPA approved it, and “strongly endorsed” EPA and San Francisco oversight for the Navy’s plan of retesting.

The shipyard stopped operation in 1974 and was deemed an EPA Superfund site in 1989. And for decades, developers viewed the area for potential prime, untapped real-estate space, thus encouraging restoration. The shipyard was approved for housing development in 2010 and by 2015, 88 units of housing were ready for people to move in. Starting in 2012, however, a city employee allegedly misled the public about the efficacy of radiation detection protocols on multiple occasions to speed up building.

Presently, close to 5,000 housing units and 4.3 million square feet of office space can be built there, the mayor’s office stated in January.

Meanwhile, 37,600 residents live in the Bayview and nearby this contaminated land, 28 percent of whom are Black.

Institutional outreach in the community has been lacking, said Dr. Kim Rhoads, a UC San Francisco professor of epidemiology and biostatistics and the director of community engagement for the UCSF’s cancer center.

Rhoads said that when she spoke with community members about their cancer concerns, she discovered that few of them knew about established institutions to tap into for help. For example, they were unaware that UCSF had a comprehensive cancer center a mere five to 10 minute drive away.

“It means that we’re not being present enough to really have an impact,” said Rhoads. “I was just shocked.”

Rhoads continued that without transparency of data and a new “transformational” approach where Bayview residents take the lead, the problems with the shipyard are unlikely to be solved.

Per Rhoads, this is due to divergent agendas: Academic institutions want publication and “not really impact,” whereas community members want “action and systemic change.”

“The reality is, folks who have been living in Hunters Point over the course of decades have observed things that we would in the academic institution traditionally miss just because of the structure,” Rhoads said. “You know, you get five years and then you’re on to the next thing.”

One way the community can stay up to date about harmful environmental pollutants is through UCSF’s new Environmental Research and Translation for Health Center, or EaRTH center, said Annemarie Charlesworth, the center’s director.

Hirsch estimated that to thoroughly restore the area to “acceptable standards” would cost an excess of $1 billion dollars. But he said, unlike the hundreds of millions of dollars already wasted on falsified clean-ups, this was worth it.

“You need to do it,”  Hirsch said, “because if you don’t and you put people on top of it, hey, they’ll start getting sick.”