The three: blue for recycling, black for trash, and green for compost. File photo, 2009

City, customer payments to Recology waste collection company spiked during period when it was contributing heavily to Nuru-controlled account

Before they formed Monty Python, John Cleese and Graham Chapman had a program called At Last, the 1948 Show. The joke: It was 1967.

No joke: Sometimes covering news in San Francisco feels like that.

There’s a pandemic, an economic catastrophe, multi-front investigations into long-running and far-reaching corruption launched following the January arrest of erstwhile Public Works boss Mohammed Nuru, and a sprawling election — with the presidential race obscuring all of the above.

By the time you can — at last — really begin to unpack a consequential development, the focus has often moved on to something else. Perhaps the focus has already shifted several times; there’s so much to pay attention to but it feels like our attention spans have never been shorter.

So, some of you may have heard about a late September report from the city controller’s office outlining the systemic breakdowns that allowed Nuru to solicit entities with business before him to donate funds into Public Works-controlled sub-accounts at the nonprofit San Francisco Parks Alliance. Nuru was then able to redistribute those dollars as he saw fit.

But that doesn’t mean what’s in here isn’t important. Far from it: The focus needs to be on the baked-in corruption and the debilitating effect it has on the city. That’s the problem, even if one needn’t pay all that much to play; the cost of doing corruption is, sadly, apparently one of the few bargains left in San Francisco.

As such, the controller’s report is narrowly focused on outlining a flawed system and suggesting methods of repairing it. It notes, by the way, that, had the Board of Supervisors adopted a 2009 Chris Daly ordinance it spurned by a 6-5 vote, unelected honchos like Nuru would’ve long ago been barred from soliciting donations to nonprofits to fund the city — proving, once again, we all should’ve listened to Daly more. And we probably would’ve, if he’d talked less. 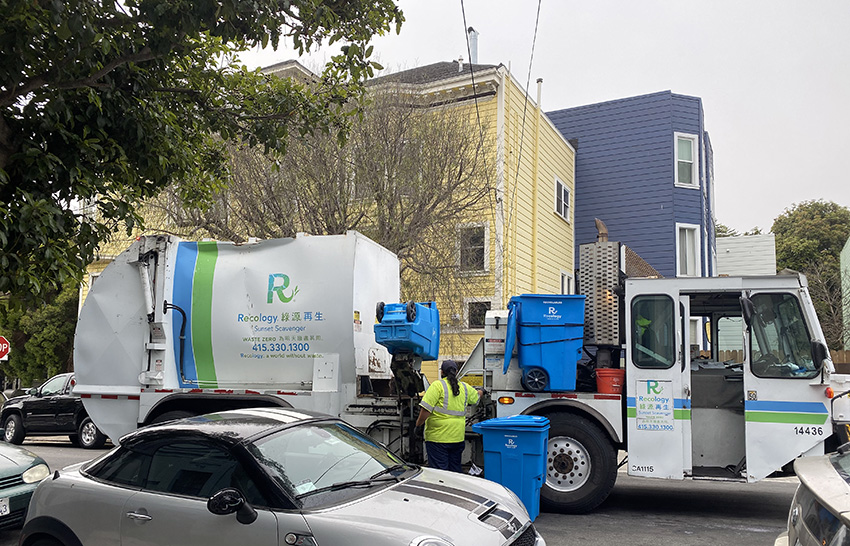 And yet, in the course of 50 pages of noting details such as “Mr. Nuru was not required to file Form SFEC-3610(b),” the controller’s report does drop a few bombs — albeit subtly. It notes, on page 31, that Nuru’s direct boss, city administrator Naomi Kelly, “was aware of his solicitation efforts” to entice entities with business before him to put money into nonprofit accounts he could tap. It does this without acknowledging her by name.

But the real shocker — and a potential window into where investigators may well be going with all this — came three pages earlier. It’s the breakdown of the sources of the money siphoned into the funds Nuru controlled at the Parks Alliance. And, wouldn’t you know it, 88 percent of the money comes from just two sources: $131,948 from Recology and $721,250 from the San Francisco Clean City Coalition, a nonprofit.

But wait: In the footnotes, it reveals that, during the five-year window of this probe, Recology — which has enjoyed a city charter-enshrined monopoly to haul San Francisco’s waste since 1932 — gave $630,000 to Clean City. In fact, in 2019 alone, Recology donated $180,000 to Clean City, which then turned around and paid $171,000 to the Parks Alliance.

So, Recology is a huge source of the money that trickled into Public Works’ subaccounts with the Parks Alliance. And Public Works is pivotal in setting Recology’s citywide rates.

Because, coincidentally or not, during the five years analyzed in the controller’s probe — during which Recology was funneling money into Nuru’s preferred subaccount — the amount you pay for Recology’s services went up some 20 percent.

With the staunch backing of Mohammed Nuru. 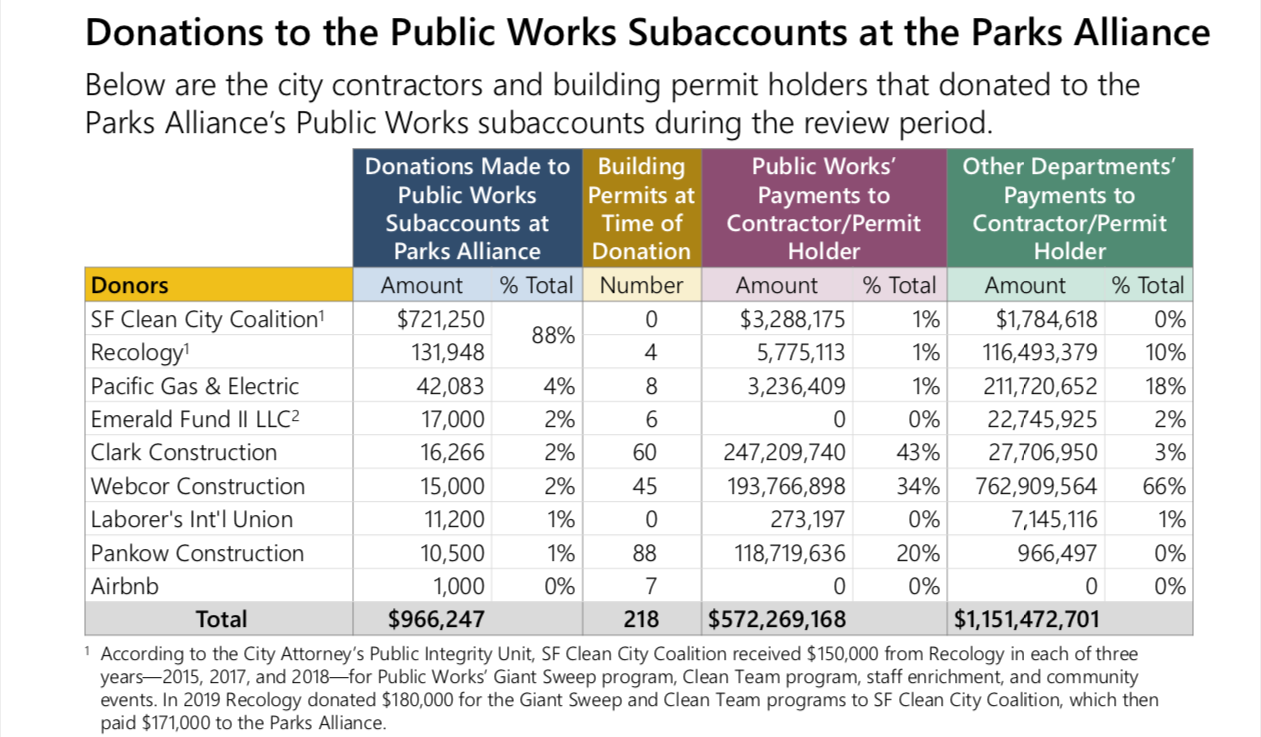 Recology characterized its decade of donations to Clean City and the Parks Alliance to Mission Local as being “in support of their efforts to clean, beautify, and expand access to the City’s parks and public spaces.”

These donations, the company continued, are “only a small part of Recology’s record of giving to organizations throughout the City.”

Fair enough. But the lion’s share of the money funneled into what amounted to a Nuru slush fund stems from Recology. Whether this money was, as Recology claims, donated benevolently to clean up this city — or if everyone’s approach was more transactional — has not yet been determined by an outside party.

What has been determined is that, during the period these donations were being made, Recology’s customer fees spiked. They were hiked by 14.4 percent in 2017, another 5 percent last year, and a 1 percent rise in 2021 is anticipated. These prices were approved by a city rate board — which unanimously approved the rates suggested by Public Works and Nuru.

So, we’re no longer talking about mere hills of beans here. Additionally, In 2019, the city approved upping Recology’s contract from $40 million to $48 million. In June of this year, the city proposed raising it again, to $53.5 million.

Clean City did not return our messages by press time. The Parks Alliance said, via statement, “We had no prior knowledge, did not benefit in any way, nor had any control over the donations that Nuru and Public Works solicited and directed to the sub-account, as the report states.”

Recology added that, after its leaders learned local and federal investigators were probing both these organizations, they “pledged full cooperation with all government investigations and strengthened employee training to ensure it addresses applicable ethics rules.”

Well, good. Based upon what we already know, it’s hard to imagine that serious questions won’t be asked and documents won’t be demanded — if that hasn’t happened already.

But, as the city continues to investigate, perhaps it ought to keep a closer eye on the reflection in the mirror. In the course of five years, Recology gave hundreds of thousands of dollars to the Clean City Coalition, which acted as a conduit to the Nuru-controlled subaccount at the Parks Alliance. But, in that same timeframe, Public Works gave Clean City far more: $3.3 million. All told, between 2016 and 2019, San Francisco gave Clean City $5.2 million.

It seems Nuru was, in essence, siphoning city funds to his chosen recipients in a scheme that resembles money-laundering. It’s as if the bartender stepped out and Nuru began pouring everyone beers: Drink up, everyone! It’s on the house!

It remains to be seen how many petty atrocities will capture and lose our attention before we potentially receive definitive answers to all our questions here. But, God willing, that day will come — at last.