The photo adorning the Emily Zeng Twitter account, which sends out caustic memes, appears to have been lifted from the Twitter profile of scholar Emily S. Chen

On a recent Thursday, a Twitter account purporting to be one Emily Zeng, a District 5 in-law-unit resident, disseminated a snarky and cutting meme targeting District 5 Supervisor Dean Preston.

No surprise there: This Twitter account, established in May 2020, exists largely to take umbrage with this district’s homeless situation, its current supervisor, and disseminate homespun memes; Zeng’s Twitter profile describes her as “Meme girl … Meme-ing to get my outdoor living room back in SF D5.”

What’s surprising is what came next — but not if you know how the Internet works. Within half an hour of Zeng’s midnight tweet, it was retweeted by around half a dozen other twitter accounts in what appeared to be a coordinated action. Within an hour, the meme was shared on the Facebook account of the new Moderate political group Vote and Change SF.

Zeng’s anti-Preston memes have been shared 16 times on Vote and Change SF’s Facebook group since Sept. 12. And, while the Twitter accounts incessantly retweeting her material are small, they are often picked up by larger accounts. All told, thousands of eyeballs are seeing this material. Considering Preston last year eked out a win over Vallie Brown by fewer than 200 votes, and considering those two are running against each other again, this is a real issue.

What doesn’t appear to be real, however, is Emily Zeng.

Is it possible that “Emily” is a nickname? It is possible. To that end, I reached out to every female Zeng and Zheng in District 5. None of the women I reached operate this Twitter feed and several, upon learning of its content, said they didn’t want to be associated with it in any way.

Maybe “Emily Zeng” isn’t registered to vote. Okay. But there’s also the matter of the photograph on her account. It’s not Emily Zeng. If you undertake a Google image search, that photo traces back to the social media accounts of one Emily S. Chen, a scholar whose Linkedin page states that she’s currently earning a Ph.D in Tokyo. (You can also find photos of Chen here and on that Linkedin page. It’s very hard to conceive of a scenario in which her photo hasn’t been appropriated). 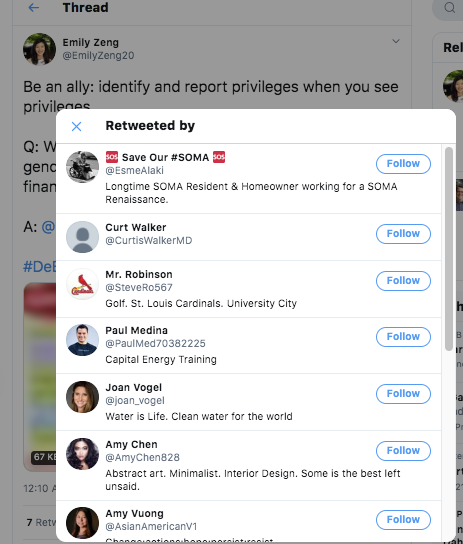 Emily Zeng’s early morning Sept. 24 Tweet is rapidly retweeted by a handful of bogus accounts before being seeded onto the Vote and Change SF Facebook page.

Chen has not returned our email or Twitter messages regarding her thoughts on this matter. But others have. Because many of the half-dozen or so accounts that regularly — and nearly exclusively — retweet Zeng’s memes also appear to be bogus, and have borrowed the photographs of real people, likely without asking.

Among them, one for “Joan Vogel” features the photo of a woman named Amy Vogel who is an HR manager in New Jersey. And one for “Amy Vuong” features a photo of a researcher in Washington state named — yes, really — Emily Zeng.

Vogel did not return our email or call. But I reached Zeng — the real Zeng — on the phone. She gasped when she saw her picture on someone else’s Twitter account.

“Oh, this is really troubling. That’s not me,” she said. “This is a huge violation of my privacy. They’re taking my professional image to do this.”

Like Zeng’s account, Vogel’s and Vuong’s were both created in May of this year, along with others that exist largely to disseminate Zeng’s Dean Preston memes.

Messages sent to whoever controls the Zeng and Vuong accounts on Twitter have not been returned.

In short, however, it’s hard not to conclude that bogus social media accounts, potentially controlled by a single entity, have been disseminating noxious political material to an outsize audience.

But not on their own. 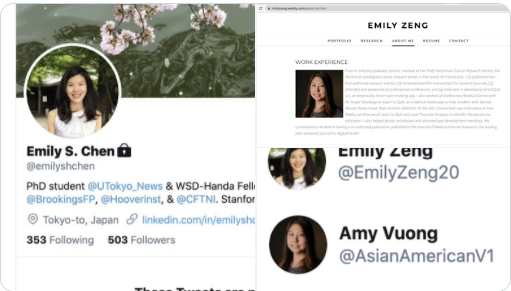 Think of what’s going on here as being a bit like Sesame Street. There are both real people and puppets. But, in this case, the real people don’t realize the folks they’re dealing with are puppets. Or so they say.

Take Jenny Chan. The longtime San Franciscan who frequently shares Emily Zeng memes and has interacted with her directly online multiple times. She had no idea that Zeng appears to be a fabrication. But would that have mattered? I mean, a meme’s a meme, right?

“I have never thought about that!” says Chan when asked if she’d share a meme from an account she knew to be fake. “I don’t know!” 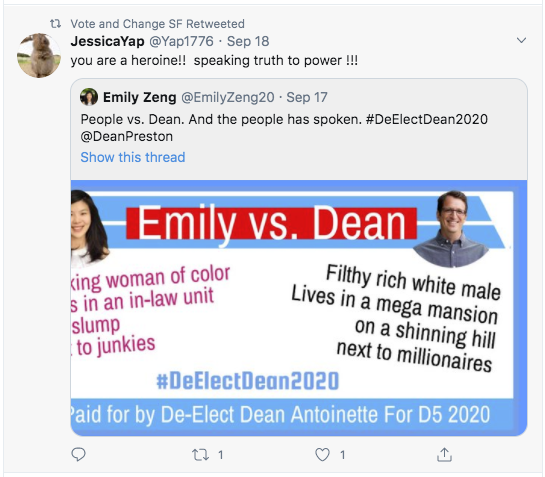 Jennifer Yan quote-tweeted this Emily Zeng anti-Dean Preston Meme. Then the whole thing was retweeted by Vote and Change SF, of which Yan is a co-founder.

Another account that prodigiously retweets Zeng memes is @Yap1776, “Jessica Yap.” There’s a fun instance on Sept. 18 when Yap1776 retweets a Zeng meme targeting Preston and anoints her a “heroine,” and then that tweet was retweeted by Vote and Change SF.

Which is interesting, because Yap1776 is actually Jennifer Yan, and Yan – according to her own header on the Vote and Change SF Facebook page — is a co-founder of that group (and a member of multiple newly formed San Francisco pro-moderate groups).

You can glean Yan’s identity because, going back a few years, Yelp restaurant reviews were cross-posted on the Yap1776 Twitter account. Those are Yan’s Yelp reviews for restaurants throughout the region and state and, for good measure, she posts photos on her Yelp account of herself and husband dining.

On Twitter, meanwhile, she shares QAnon-adjacent hashtags and Trump propaganda.

And, on Vote and Change SF’s Facebook page, as noted before, Zeng’s anti-Preston memes have been shared 16 times.

Yan did not return our calls.

So, if you’re keeping score at home, a coordinated ring of bogus social media accounts are seeding noxious political propaganda into the ether. And it’s being disseminated by newly formed pro-Moderate outfits in which centrist Democrats are — unwittingly or not — partnering with Trumpists to hone in on Progressive politicians.

I spoke with Vote and Change SF’s chair, Priscilla Muñiz. She made it crystal clear that her only goal is to get moderate politicians elected, which she believes will lead to a better city. She has no interest in disseminating right-wing propaganda; she’s a proud Democrat. But Muñiz is a person who dwells in the real world — not the Internet.

Muñiz stressed that, “We’re not some right-wing conspiracy group. Our objective is to bring some good leadership into the city. That’s what we’re about.”

There’s no reason to doubt her. But Vote and Change SF’s Internet presence isn’t something Muñiz personally oversees, and the Internet (let alone Facebook) has a way of undermining everyone’s best intentions. 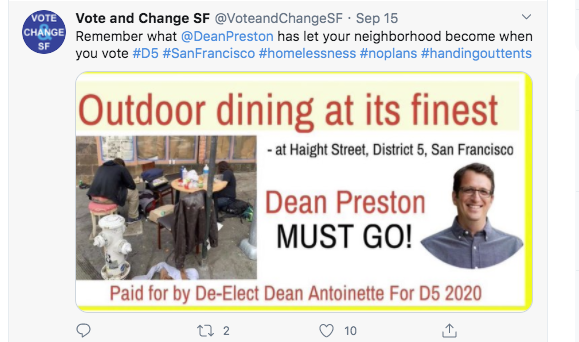 Most all of the legwork exposing these bogus accounts and the dissemination of their work was undertaken by Adam Miller, a former tech worker  who now contracts with San Francisco progressive campaigns.

It wasn’t very hard for him. The bogosity — to borrow an expression the Car Talk guys used to throw around — isn’t well-hidden. This was quick work for him.

The question is: Does it matter? Do people even care about the authenticity or motives of a person creating an easily disseminated message if it appeals to them?

When I peruse Jenny Chan’s social media feed, there’s a lot of anger. But when I speak to her on the phone, I hear a longtime San Franciscan who’s concerned about her city, who’s frustrated by the strangling lockdown, and who feels powerless to help people who are struggling. She sees homeless people languishing out-of-doors during wretched air days, and doesn’t know what to do.

Similarly, there’s no reason to doubt that all Muñiz wants to do is solve this city’s problems and elect moderate supervisors. But, thanks to the joys of Facebook and the Internet, her group has found common cause with right-wing Trump supporters — whether it likes it or not, or acknowledges it or not.

Meanwhile, “Emily Zeng” sent out a Tweet earlier today dragging Dean Preston. It was reverberated by several of her bogus internet buddies.

And some real ones, too.