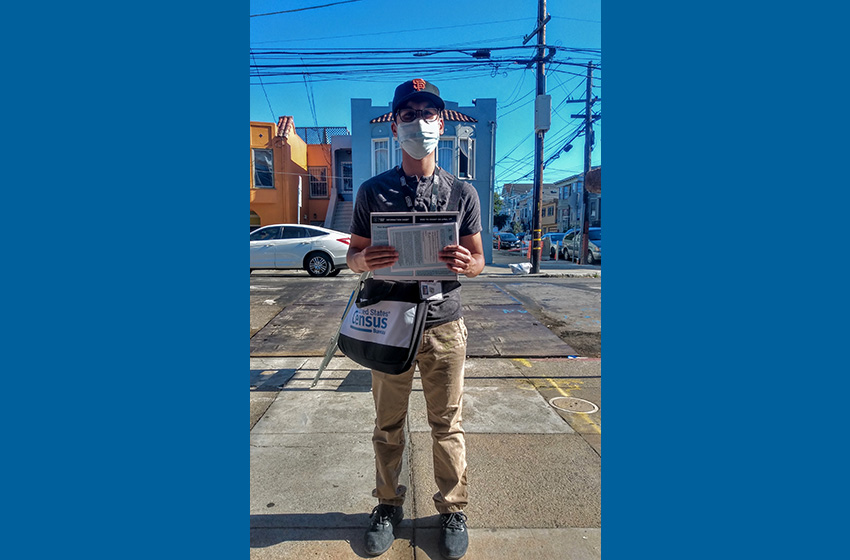 On a warm Wednesday late in the afternoon, Jose McDevitt-Hickey walked down 22nd Street from his home on Bryant Street to ask his neighbors who they are. Slung from his shoulder was a bag bearing the words “United States Census Bureau” in blue letters. He felt pressed for time. “The Census was supposed to start in July, but Trump took a month away,” he said.

McDevitt-Hickey, who was born in San Francisco General Hospital at the turn of the century, will graduate from DePaul University this fall with a degree in Business Administration. It’s evident, however, that his true passion is the subject he’s minoring in: geography.

“It’s a totally underrepresented field,” said McDevitt-Hickey, who explained that geography is a study of people, space and time.

“We use it every day,” he said. “Take the air we breathe. When we build a park we’ll say ‘oh the park is natural.’ But are we really breathing the same air?”

Questions like these partly explain why he’s working for the U.S. Census Bureau. That, and the onset of the pandemic.

“I was in China, thinking this was just some kind of weird pneumonia, but my mother called and told me I better come home,” he said, noting that he speaks Cantonese and Mandarin. “So that’s why I’m out here. I’m getting to know the neighborhood.”

The neighborhood might not want to be known, however: McDevitt-Hickey is having a hard time getting people to talk to him, fearing the release of their information.

“I tell them, yes, it’s personal, but it won’t be released for 75 years!” he said, noting that many people in the neighborhoods are recent transplants. “But they’re reluctant.”

He understands the reticence, given the current political climate, but plans to continue canvassing the neighborhood.

“It feels important, as a geography student,” he said. Understanding the past, he maintained, is hard without good data.

If you come to us frequently, like what you read, keep us here by supporting Mission Local