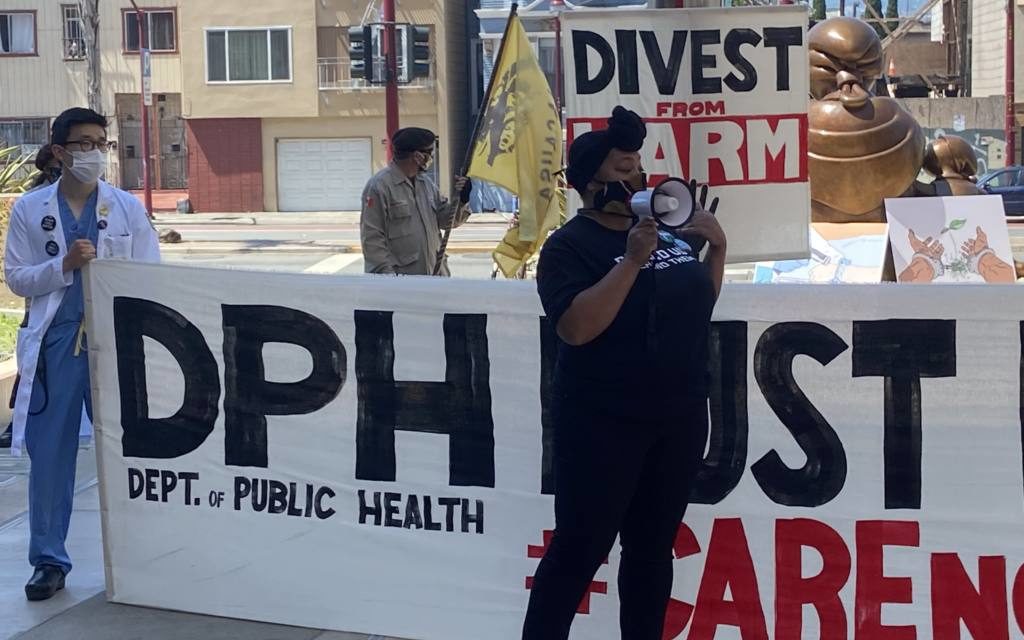 Schyneida Williams tells the rally about how some minority patients feel uncomfortable with sheriff deputy presence. Photo by Annika Hom.

A mob of nurses and doctors still dressed in their scrubs gathered in front of the Potrero Ave. entrance of San Francisco General Hospital today to demand city healthcare clinics and hospitals boot the sheriff’s deputies who secure the premises.

The protest came on the heels of a letter that Director of Public Health Dr. Grant Colfax sent last month which promised to re-evaluate the deputies’ presence after finding Black patients faced a disproportionate amount of use-of-force in emergency rooms last year.

Colfax’s letter said that of 111 emergency room use-of-force incidents, 70 percent of them were directed at Black patients, who accounted for only 24 percent of ER visitors.

“If we see racism in security responses, we need to denounce that,” said Daniel Madrigal, an environmental public health worker, who slipped out on his lunch break to support the rally.

Schyneida Williams, the engagement coordinator for the UCSF Black Women’s Health and Livelihood Initiative, attested to perceived racism aimed at patients of color in her speech today.

“For so many years I’ve heard of experiences of intimidation from people who come to this hospital to get care and particularly being met with sheriffs,” Williams said. “I think there are alternatives.” 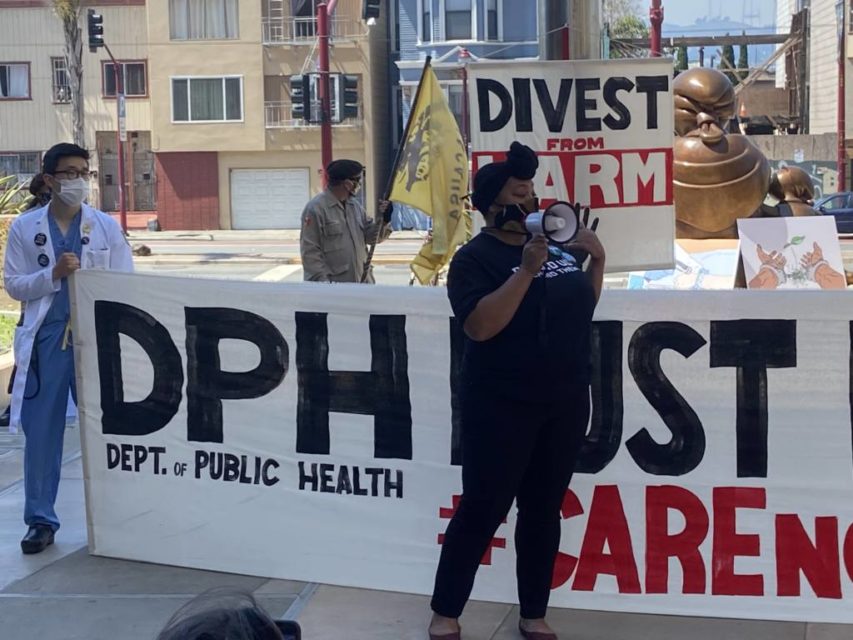 Schyneida Williams tells the rally about how some minority patients feel uncomfortable with sheriff deputy presence. Photo by Annika Hom.

Dr. Maisha Davis, a Black physician who works at a clinic in the Fillmore, agreed and said the George Floyd protests reignited fears among their elderly Black patients. The police killing of Floyd in late May eventually prompted Davis to write a petition on June 7 that asked Colfax and other city leaders to remove deputies. 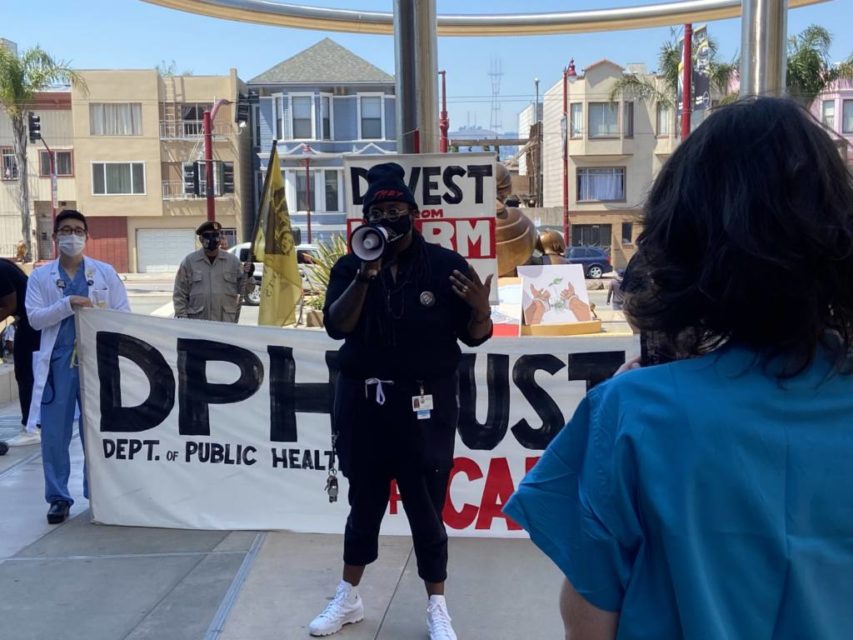 Davis’s letter was bolstered by another petition and letter penned by Black midwife Asmara Gebre, who decided to go on strike on July 8 in response to “racist” interactions between deputies and patients. Together, their petitions have gathered more than 1,500 signatures.

The day Gebre went on strike, she said, she saw six deputies engage inappropriately with a Black patient.

“I am not contracted by the Sheriff’s Department,” Gebre said. “I am sick of this f*cking racism.”

But DPH Must Divest also understands that hundreds of their colleagues oppose eliminating deputies. Nurses cited their own safety concerns and created a dueling petition that amassed more than 4,000 signatures. Other nurses at the General alluded to incidents where deputies intervened when patients in the psychological ward or emergency department endangered staff, and some nurses threatened to strike if deputies were removed.

Davis understands this. The goal is to make sure everyone feels safe, Davis said. DPH Must Divest argues that this can be done without police figures. While there isn’t a solidified plan for this, Davis said funding could be increased to entities like the existing Behavioral Emergency Response Team, which is supposed to defuse medical situations regarding mental health.

“There’s a reductionist way people look at our movement in terms of divesting. It’s not that we want to take away, it’s that we want everyone to feel safe,” Davis told Mission Local.

De-escalation tactics and training have been suggested for staff to negate the need of deputies, but with a persistent lack of funding, many nurses said these already mandated training have consistently fallen through.

This was echoed by critics, many of whom reacted fearfully to Colfax’s July letter.

“I feel afraid for my life. I feel so upset [by the letter],” said Christa Duran, a registered nurse in the emergency department at San Francisco General.

Read our coverage on how nurses received a letter from Dr. Grant Colfax addressing use-of-force incidents against Black patients.

Yet minority patients are also afraid. Jose Gongora Pat, the brother of 2016 police shooting victim Luis Gongora Pat, told Mission Local that when he visited San Francisco General to treat a sprained ankle a week after his brother’s death, he was met with frustrated and angered deputies.

“Instead of having a police force that approaches us as if we’re bad people when we arrive, we need doctors and social workers to respond,” Gongora Pat said.

The rally ended with a nurse reminding the dispersing crowd that they should call in on Monday to the city’s Budget and Appropriations Committee to continue the push to divest from the police budget.

“Divesting is vital. It’s well past time that DPH has done this,” they called to the crowd. 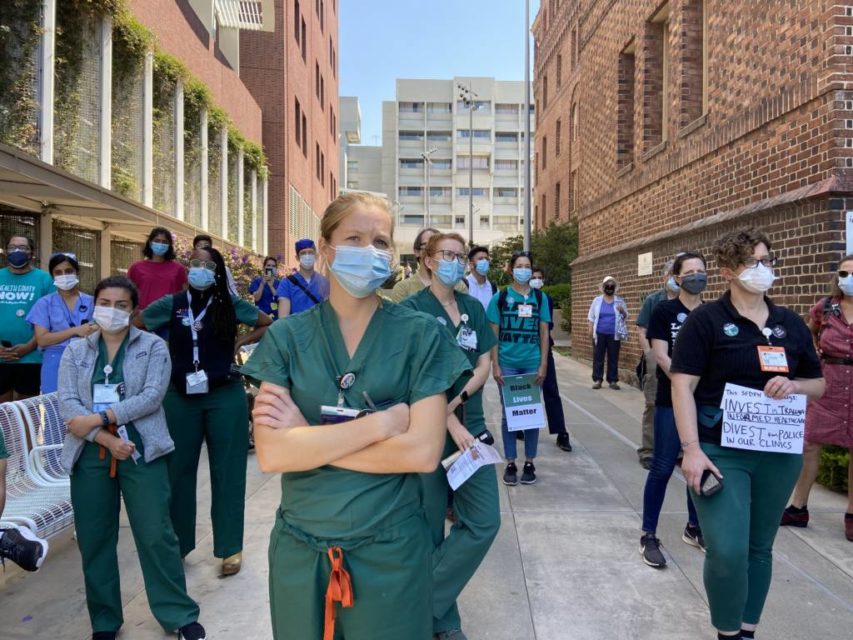 A group of nurses at Zuckerberg San Francisco General Hospital listen to the speakers. Photo by Annika Hom. 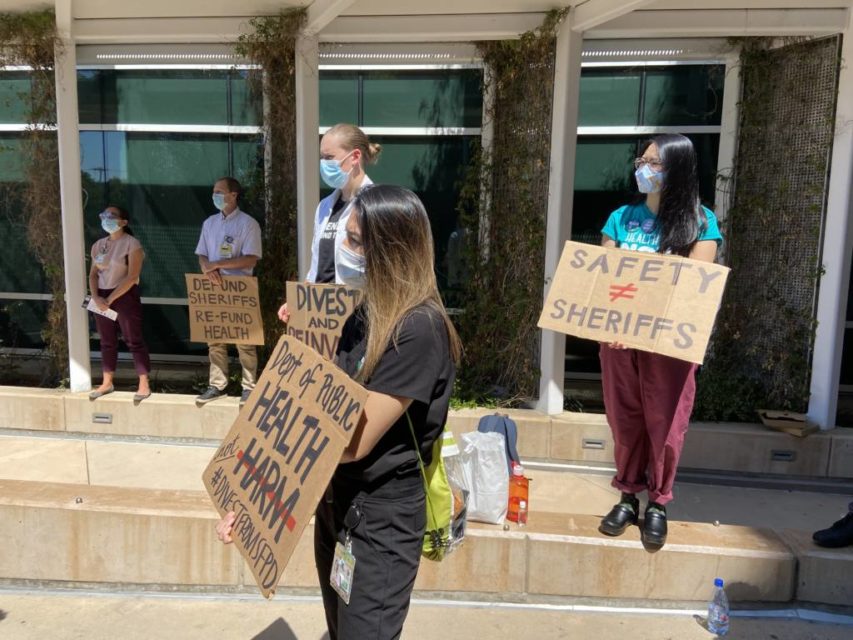 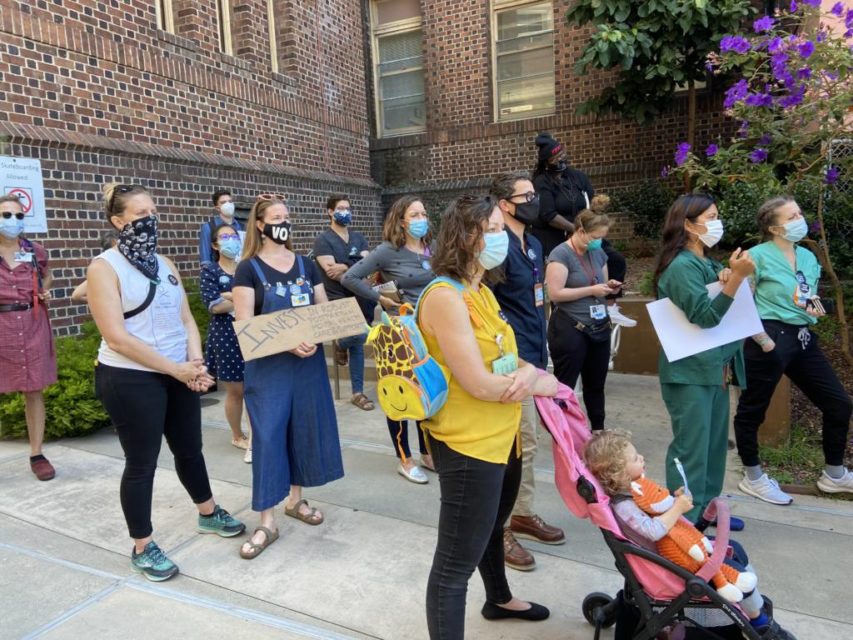 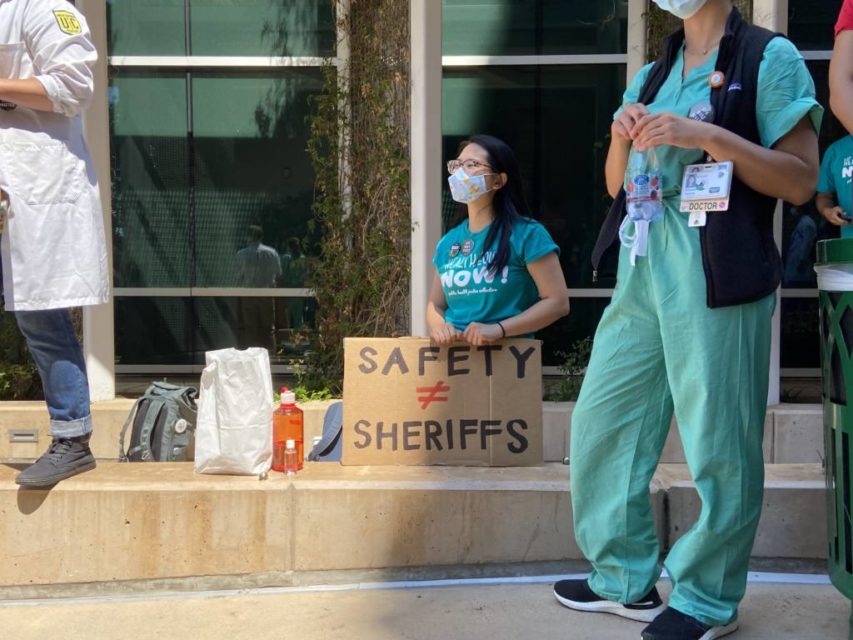 A nurse at the rally holds up a sign. Photo by Annika Hom.