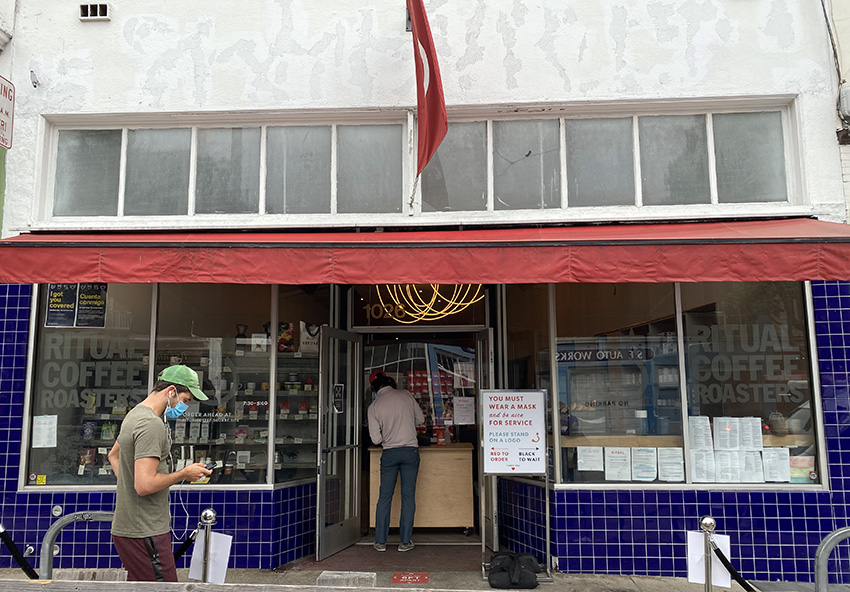 After a long campaign from staffers for changes in the company’s culture, Eileen Rinaldi, the owner and founder of Ritual Roasters, responded in a June letter acknowledging mistakes in how incidents involving customers of color were handled, Ritual’s lack of diversity and the need to “make a meaningful change within Ritual.”

She pledged to do better: auditing Ritual’s hiring practices and working “to retain and promote a diverse and inclusive group of individuals.” Their leadership team, she wrote, failed to reflect the diversity of the staff, “and that is a problem.”

“A lot of current criticism,” she acknowledged, stemmed from past incidents in which staff  “called the cops on people of color.”

“I now recognize that, by using the police as a first line of defense, we have created a larger risk for those disproportionately affected by police brutality and violence in the process.”

In many ways, her response was an extraordinary admission from a woman not known for acquiescing to employees. First opening on Valencia Street in 2005 with partner Jeremy Tooker, who left in 2007 and later had problems of his own at Four Barrel, Ritual was an immediate success. Since then, it has grown to some 60 employees at six locations. All but one are open during the pandemic.

In the last couple of years, those employees have become increasingly vocal, said the five current employees and four former employees Mission Local spoke with. And it’s clear that Rinaldi’s response and follow-through will be watched closely by her employees.

The June letter, employees said, came after employees took it upon themselves to “email blast” Rinaldi and two others in upper management with demands.

While Rinaldi’s response took into account a May incident in which Talya Strader, the people operations manager at the time, called the police on a customer, it failed to address an incident in February 2019. That incident involved Rinaldi’s husband, John, known as “Chicken John,” a Mission cult figure who ran against Gavin Newsom for mayor in 2007 and was known for holding festive and loud events at his warehouse on Cesar Chavez Street. It appeared, however, that Rinaldi had settled down somewhat, marrying the Ritual entrepreneur in 2012 and selling his warehouse in 2018 for $1.8 million. Since their marriage, he has been spending time at the different stores to do various forms of maintenance, according to Rinaldi.

It’s not a presence that has worn well. Chyler Barraca, a former Ritual employee now working at Dandelion Chocolate, said that Rinaldi’s husband “didn’t bother to get to know the employees, and was “standoffish, kind of a jerk,” she said. “His reputation was known within the entire company.”

In an interview with Mission Local, Rinaldi said that both she and her husband are in a “different place” now. Her husband still acts as an all-around “problem-solver,” but he’s not physically going into the cafes. Neither is she. COVID-19 protocols have changed this.

For a barista working at Valencia Street, who asked not to be identified, Rinaldi’s June letter offered just another instance where employees are, “having to constantly hold her (Rinaldi) accountable, and her making solutions and those solutions creating harm, and us having to hold her accountable to that harm.”

A confrontation in May

In May, the police were called on a customer of color.

Laine Barriga, who uses they/them pronouns, has been a barista with Ritual for the past four years, and opened up the Valencia Street location that morning.

The line ordering system back then was “a little bit of a shitshow,” Barriga said. Because of covid-19, they had two lines, one for in-person ordering and another for online pickups, but there wasn’t much signage indicating the distinctions.

A customer of color arrived on his bicycle and didn’t understand the system. After a few minutes he grew agitated, and angrily demanded to be served, using expletives. Barriga asked him to wait in the correct line and told him that there was no need to yell.

Nevertheless, things escalated. Barriga made the decision to refuse him service after he became more heated. He began demanding that they serve him or call the police. Barriga told him that they would not call the police. After the two went back and forth a few times, two managers approached, one of whom was the people operations manager at the time, Talya Strader.

“I’m just frozen there, standing there,” said Barriga. “Wishing that he would just go away.”

“But I hadn’t left the situation because I wanted to make sure the situation was handled properly,” they said, adding that the two managers were white. “I couldn’t in good faith walk away and expect two white people to talk to a man of color,” said Barriga, who is also a person of color.

The second manager, Lindsey Amodei, de-escalated the situation, talking with the customer for a bit, giving him a coffee free of charge and asking him to leave the premises. “As soon as he receives his coffee, he is calm,” said Barriga. And he left.

“He is clearly going through something,” said Barriga. “He is having a moment, this was something he was upset about, and he took it out on us.”

But during this exchange, Strader, the people operations manager, had called an emergency line.

Even though the customer had left, the police still arrived. Learning this while taking a breather downstairs, Barriga was shocked. “I asked Talya, straight in the face, ‘Why did you call the cops?’” they said. “The whole time that I’m going back and forth with this guy, I’m telling him I’m not going to call the cops on him.”

According to Barriga, Strader responded by saying that the customer had wanted them to call the police. So she did. By the time the police arrived, the customer was gone.

In an interview with Mission Local, Strader explained that while working in the coffee industry for many years, she’s been in this sort of situation before. In her experience, she said, “a performance call usually solves this scenario.” Initially, she only pretended to call the police while standing at the order window, but it didn’t help, she said.

So, she wound up actually calling the police, and when they arrived 30 minutes later, she explained to them what had happened, and that was it.

Looking back, Strader said she has reconsidered how she handled the situation. “I do believe I was doing it out of performance, and not trying to get anyone hurt,” she said, “but I do absolutely regret calling them.”

Rinaldi told Mission Local that Strader resigned on June 11. “I think that speaks volumes,” she said. “I think she knew calling the police in that situation was against the spirit of the work we’ve done over the past year and a half and that it violated our de-escalation policy.”

But according to Strader, her resignation and the May incident were not related. Strader said that internal conversations after the killing of George Floyd were focused on how, “We have White leadership at this mostly White company, where we only see diversity in the baristas.”

Strader said she decided to resign after learning more about privilege and white supremacy. Her resignation was intended to make space for a non-white person to take on an important leadership role within the company. “I, being the newest portion of leadership, owed it to them (Ritual) becoming better by resigning in my position,” she said.

In her June letter, Rinaldi said she was looking for a new people operations manager experienced with diverse teams and dedicated to seeing BIPOC employees succeed.

Employees told Mission Local out that the May incident echoed an earlier confrontation at the Hayes Valley Ritual location.

In that incident, a now-former employee was behind the counter in February 2019 when a Black man reached into the tip jar by the register.

The employee, who goes by they/them pronouns and asked not to be named for this article, estimated that the jar had maybe $40 in it. They guessed that he was unhoused or simply low-income.

They and their colleagues were unprepared for what happened next.

A white male customer immediately threw the Black man to the ground, and John Rinaldi joined the customer in pinning the man.

When police officers showed up, the customer and Rinaldi were let go. After a struggle, the Black man was arrested.

The former employee and other staff were horrified. “No one asked us what we wanted,” they said. “None of us asked for that to happen.”

Ritual’s founder, Rinaldi, had just had a baby around the same time as the tip jar incident. Out on maternity leave, she didn’t address the staff for two months.

“It did take a while for her to be able to reach out and actually address the issue,” said Christina Busler, a Ritual employee who heard about what had happened from friends at Hayes Valley. Busler added that she was sympathetic to Rinaldi having just had a baby, but, “there was a defensiveness at first, because everyone was attacking her husband.”

“We all have degrees of not really liking him,” she said.

After some back and forth between Rinaldi and the Hayes Valley team, two mediated meetings were scheduled, the first in June, the second in August. At the second meeting, Rinaldi agreed to make some changes, including hiring Strader, who has since left, as the people operations manager.

In an email to Mission Local, Rinaldi wrote that her employees made it clear at the time that they were unhappy with how the incident played out.

“We are investing our time, our thought, as well as a financial commitment to create an environment that is safe, welcoming and inclusive for our Black, Indigenous, and employees of color, as well as for customers and the community,” she wrote.  “Working towards racial equity at Ritual means teaching every single employee strategies for how to de-escalate situations themselves, it means explaining why we don’t call the cops on someone who stole a handful of tips or is having a mental health crisis.”

She added, “I have work to do. We will all be better for it when we envision a future through this lens.”

Rinaldi said her June letter to the staff was indeed a response to the email campaign by former and current employees. Their emails “shared experiences at Ritual around race,” she said, as well as experiences with Strader, most of which Rinaldi was hearing for the first time.

Rinaldi has a different perspective now than she had over a year ago. “I don’t think anybody would look back on that situation and not do something different,” she said.

“The world has changed, I have changed,” said Rinaldi. “I am in a different place now than when I was having conversations with staff over eighteen months ago,” she said. When asked about her husband’s role in the February incident, she said she feels similarly. “Everyone is in a different place.”

It’s unclear if Strader’s exit and Rinaldi’s promises to do more in hiring and changing the culture will be enough for employees.  “A lot of people want a seat at the table in decision-making,” said the Valencia barista. “And want the gatekeeping of information to stop.”

If you read us regularly — and have not yet chipped in — do so now. We depend on it.