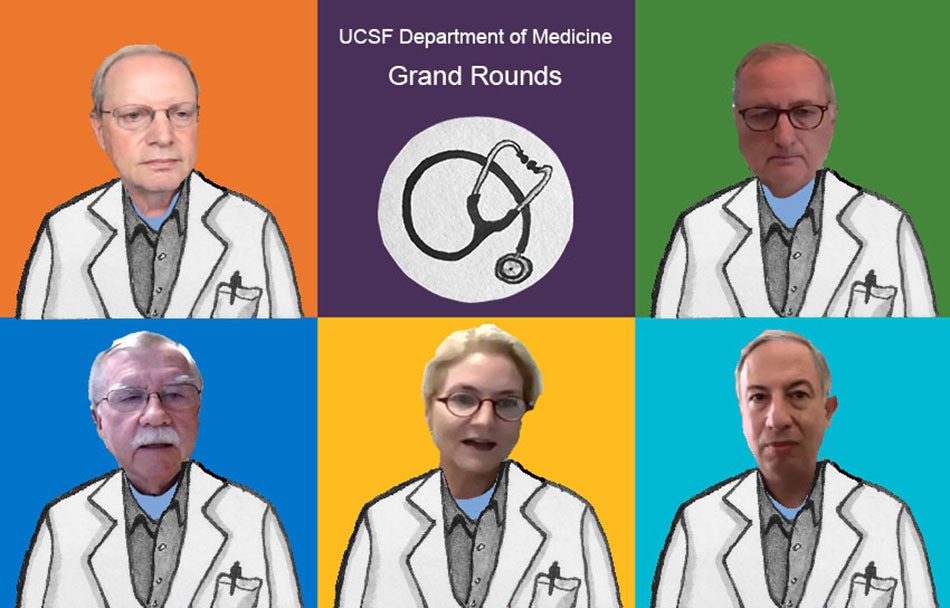 Back in March, the idea that one could talk about COVID-19 surges in several states without widespread panic was unthinkable. Today, as the country faces a surge so severe that President Donald Trump has even called off the Republican Convention in Florida, the reactions of fear and panic have evolved.

Grand Rounds moderator Dr. Bob Wachter said it best: “Those emotions have been replaced by something else; I think a combination of disappointment and even a little bit of anger, because we do know so much more than we did. And a lot of this feels like it could potentially have been prevented.”

What also became clear in hearing from the medical front lines of California, Georgia, Florida and Texas is the need for a strong national policy. The reports from states with governors averse to taking strong measures, left medical professionals with little power to avoid calamity.

“Part of the problem we’re having is this challenge between politicians playing politics instead of playing public health,” said Dr. Carlos Del Rio, executive associate dean at Emory School of Medicine & Grady Health System, who was one of four medical officials reporting in today’s Grand Rounds. He later noted that businesses face the “undue burden” of creating and enforcing mask policies, creating a patchwork of decisions wherein “frankly, everybody does whatever they feel like.”

And that’s made for a surge that is now hitting many states hard.

The U.S. is averaging 70,000 cases per day — in Dr. George Rutherford’s words, “a Wuhan a day,” as that city had only 70,000 cases total. Here, 40 states have had rising case counts for the last two weeks, said the UCSF professor of epidemiology, with now-familiar statistics: case counts, death tolls and hospitalization rates. 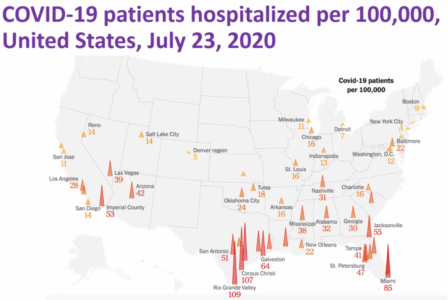 Referencing a New York Times map, Rutherford discussed “how much greater the hospitalization numbers are up” in the states discussed in today’s Grand Rounds: California, Georgia, Florida and Texas.

Though it is the state with the greatest total number of COVID-19 cases, California cities don’t have the highest hospitalization rates. When you take into account population, California is 12th in current cases per capita and 23rd in total cases per capita.

“You can see there may be— using happy, magical thinking — may be some flattening of the curve up here over the last week in California,” Rutherford said with caution. 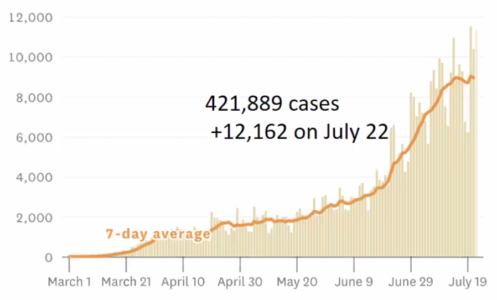 Diving into Bay Area stats, Rutherford said that cases are falling in most places, except for  a “persistent outbreak” in Contra Costa. He also noted that San Quentin State Prison may be hitting herd immunity with transmission slowing down, as 60.11 percent of inmates have tested positive.

Dr. Carlos Del Rio, executive associate dean at Emory School of Medicine & Grady Health System, stepped in next to give an overview of the COVID-19 surge in Georgia. Del Rio used a graph to demonstrate the stark contrast between New York’s and Georgia’s curves. 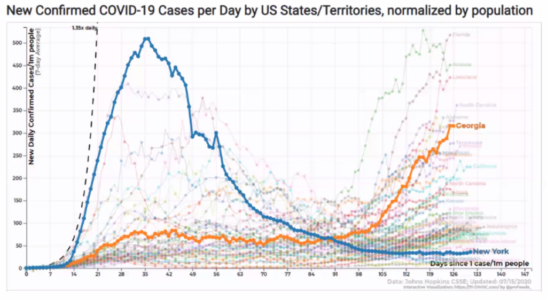 “In this country, we don’t have one epidemic, but we have multiple epidemics,” Del Rio said.

Georgia “closed late and opened early,” said Del Rio. While he was able to work with Atlanta’s mayor to pass a mask mandate, Georgia’s governor is attempting to overturn the mandate in an “ongoing debate” with Del Rio. The governor “says reopening is about keeping a healthy economy,” Del Rio said. “I keep on saying that the way to get a healthy economy is through public health.”

Georgia has 28.1 cases per 100,000 people, and a COVID-19 positivity rate of 15 percent. Its intensive care units are “saturated,” according to Del Rio. Contact tracing is shockingly low, with only eight percent of contacts reached.

Dr. Tanira Ferreira, chief medical officer for Inpatient and Acute Care Services at the University of Miami Health System, ditched the slides in her discussion of Miami’s obstacles. The number of cases in her county has quadrupled since the surge’s start, threatening to overwhelm neighboring counties.

Her hospital prepared early in the pandemic using vertical isolation tactics (separating floors of the hospital into COVID-19 and non-COVID-19 wings). In preparation for hurricane season, the hospital had already stockpiled PPE, certain medications and ventilators back in January, before COVID-19 created massive demands. However, Ferreira said there hasn’t been strict enforcement of universal mask-wearing or social distancing in Miami and other places in the United States. These factors have led to the further spread of the virus, as well as a lack of staffing as medical personnel get sick.

Dr. Richard Robbins, department chair of medicine at Houston Methodist Academic Institute and Weill Cornell Medical College, said pressure from the national government pushed the governor to begin reopening in May from a statewide shelter-in-place order in April. Protests in the wake of the “brutal murder of George Floyd” (whose funeral was a mere four miles away from Robbins’ hospital) may also have had an impact on rising case counts, Robbin said. The state entered phase three of reopening in early June and, as more people came out with fewer masks on, cases began increasing until the end of June, when bars and restaurants closed once again. A mask mandate was issued mid-July.

Robbins noted that, in his hospital, there has been a downward shift in the mean age of patients, which is now 45.

“For the last 150 years, Texans have had an independent streak. So many of them are not so happy to follow the rules that are laid down,” Robbins said, noting that many young people feel invincible. “The problem is, if only 20 percent of the people are not following the rules, that ruins it for everyone else.”

Dr. Adrienne Green, vice president for patient safety at UCSF, described a bubble from which San Franciscans watched COVID-19 surge across the country. Though that bubble has since popped, doctors at UCSF were able to implement a four-S surge plan within UCSF hospitals: space (hospital capacity), staff, stuff (PPE) and systems (identifying triggers for required safety actions).

“For each level of surge, we have this very detailed, system-wide, consolidated plan, and then we have an individual targeted plan for every entity and functional area in the health system,” Green said.

However, there are still things that keep Green up at night, namely, striking a balance between the next surge of COVID-19 patients and continuing to serve other patients with health issues. She was also worried about a lack of supplies, especially testing kits, as well as staffing problems.

Staffing issues were a recurring part of the discussion. Wachter’s final question made that clear. With three months to prepare, he asked, “did you think that there was going to be possible that you’d be getting hammered the way you are now and to the extent that you had prepared?”

“What I didn’t expect to see is what we’re experiencing now this early. We were preparing for this probably for September and October. But the thing is, we never stopped preparing, because the plans were in place,” Ferreira from Miami said. “We just sort of adapted the plan. But everybody’s exhausted. We haven’t had vacation.”

Long gone are the adrenaline-filled days of March and April, when the streets were filled with the pots clanging and people cheering as they sheltered in place. Healthcare providers are exhausted, and frustrated with a situation that could have been prevented, said Del Rio from Texas.

“You really have, I think, a mental-health crisis among providers that I think we need to address,” Del Rio said, describing a cascading effect as exhausted healthcare professionals get sick outside of work. Ironically, “The safest place to be right now is the hospital. The community is where you don’t want to be, because we’re actually protecting you in the hospital.”