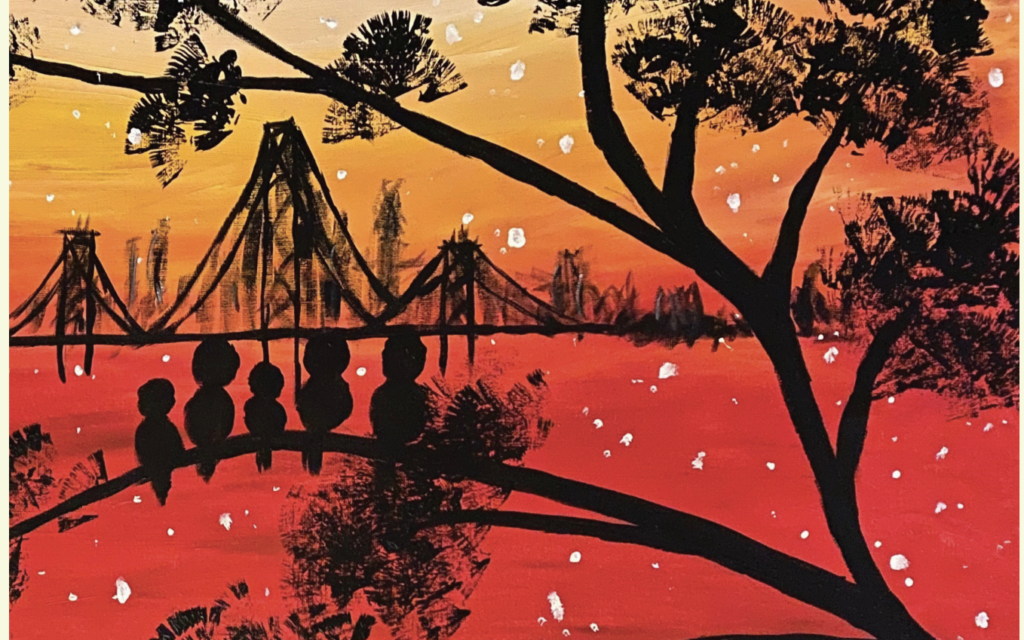 Angelo Gerard Ubas, 14. He said he chose birds to represent his family because “they fly all over, they explore – like the census.”

Normally ahead of the curve on most issues, San Francisco is falling behind on the 2020 census.

A virtual awards ceremony Wednesday for a city-wide youth art contest sponsored by the Office of Civic Engagement and Immigrant Affairs and hosted by media forum Ethnic Media Services, highlighted the struggles facing marginalized communities participating in this year’s census.

If they go uncounted, families miss out on critical federally-funded resources, such as public and emergency services, and medical programs.

So the prompt for this year’s contest: “Why My Family Counts” challenged participants to respond with art.  Of the more than one hundred 14- to 21-year-old participants, a little over a dozen won first and second place for their answers in paintings, drawings, poems, and videos.

“Kids pay the steepest price for an undercount,” said Sandy Close, journalist and founder of Ethnic Media Services. This issue is particularly relevant now, Close continued, “as the country, and our city, grapple with the triple crises of a pandemic, an economic downturn, and civic outrage over racial injustice.”

A small handful of the contestants spoke about what inspired their work.

For Jesse Martin, who won a special mention for his short video submission that showed his relatives gathered for a birthday party, his family was his inspiration. Many of his relatives are mixed, black, Latino, white, and Pacific Islander. He feels they’re representative of the diversity, the faces of San Francisco.

Another winner, Angelo Gerard Ubas, submitted a red painting of birds sitting on a tree, the skyline of San Francisco in the distance. The birds symbolize his family. Ubas drew the city as blurry, and a little out of focus, he said.

“That’s where the census comes in,” said Ubas. “The census is important because it helps to sharpen our image of our city — like who lives here, what neighborhood do they live in, the age groups, and so much more.”

The census counts the population of the United States and five U.S. territories and helps determine the distribution of federal resources. Starting in March, households would have received invitations to fill out a questionnaire online, by phone, or by mail, to assess the number of people living in their home as of April 1. The last day for households to respond is October 31.

Along with recognizing the awardees, a panel of civic leaders and census experts also talked about the neighborhoods, areas, and demographics of San Francisco that have the lowest census response rates.

“We are all here because we believe in this long-term strategy of making sure marginalized communities, vulnerable communities get the resources and representation they deserve over the next ten years,” said Robert Clinton, 2020 census project manager with the Office of Civic Engagement and Immigrant Affairs

Historically across the board, low-income, non-English speaking, immigrant communities have a harder time participating, according to Clinton. Those calling in to do the survey over the phone, often deal with long wait times. Limited language options make it hard for some to complete online questionnaires. And this has been exacerbated by the pandemic.

“The census is, and always has been, overtly political,” said Clinton. “And it’s one of the many tools our federal government has to make us seen as a people, but also to erase us as a people.”

According to Clinton, the Eastern region of the city has the lowest response rates as well as the highest rates of COVID-19 cases. Specific neighborhoods include the Tenderloin, Bayview Hunters Point, and South of Market. Overall, San Francisco households are responding at a rate lower than state and national averages, he said.

David Tucker, with the California Complete Count Office, voiced appreciation for the youth who participated in the contest. “I am excited and encouraged by the message they are sending, not only to their families, but to their friends and community,” said Tucker.