SFPD lags in Crisis Intervention Training, and Black people remain over-represented in use of force incidents 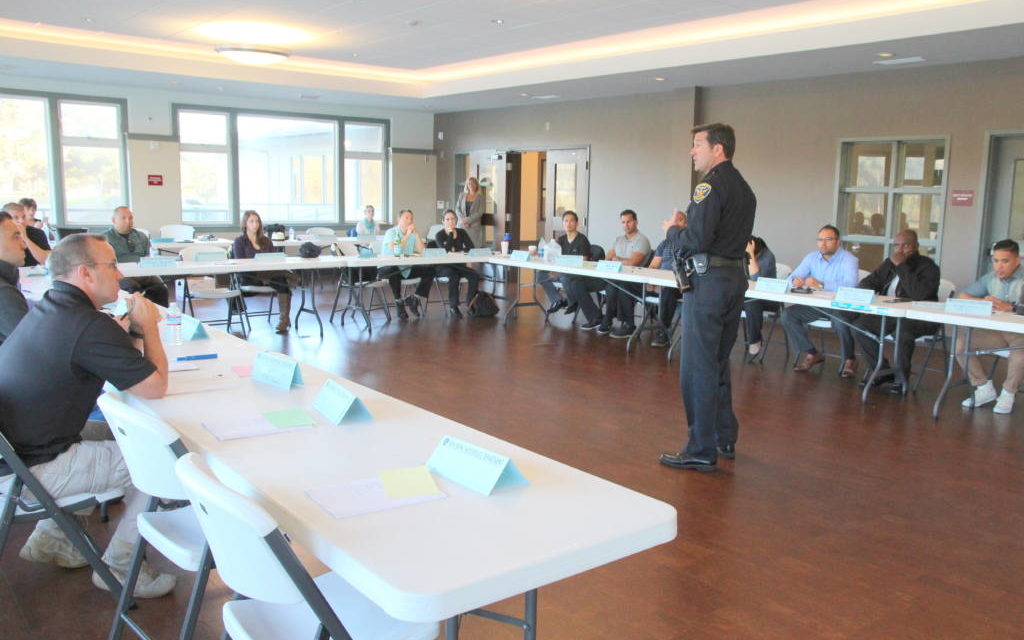 Only half of San Francisco Police Department officers have taken a required 40-hour Crisis Intervention Team training, according to the 2019 year-end CIT report being presented to the Police Commission tonight. Nearly all of the officers have completed a 10-hour training that focuses on tactics.

The percentage of officers who have been through the program was the lowest at Mission Station, where it was only 48 percent, even though Mission Station received 3,323 crisis-intervention calls in 2019, the second-highest in the city (Central Station, with 3,423 calls, was number one). Other stations with high CIT calls, such as Central, Southern and Tenderloin, also had fewer than 60 percent of its officers CIT trained.

The report also showed that Black residents were disproportionately represented in instances when use of force occurred. Of the 65 calls that ended with use of force last year, 17 of them — or 26 percent — were for Black subjects. Blacks represent roughly 6 percent of the city’s population.

There were a total of 50,840 calls related to mental health or wellness checks in 2019, the report said. 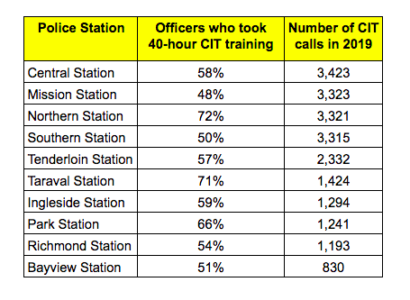 Terry Bohrer, the chairwoman for the police department’s CIT Working Group, said she would prefer to see the entire department undergo the 40-hour CIT training.

“If it’s 40 hours, doing the math, you can see what it is to train the whole force,” she added. “Then you train people, and they retire, and you have new recruits coming and new people that have to be trained.”

David Elliott Lewis, a former civilian CIT trainer and a member of the working group, said it was a simple matter of logistics and how many trainers SFPD has allocated.

He said he meets with Police Chief Bill Scott about four times a year (in non-pandemic times), and one of his requests is always to increase the CIT staff. Lewis said the lieutenant who runs the CIT unit currently has a staff of six, including two police trainers.

“Lt. [Mario] Molina is doing the best he can with the budget and staff he’s given,” Lewis said. “If he had 12 staff, I believe he could do twice as many trainers. I believe instead of doing eight trainings a year, they could do possibly 16.”

The trainings are usually limited to 35 officers — the most that can be put through a class without it becoming unwieldy, Lewis said — and they are usually conducted over four 10-hour days. “It starts at 7:30 in the morning. It’s brutal,” Lewis said.

And, in the time of COVID-19, trainings have been suspended altogether.

Jennifer Friedenbach, executive director of the Coalition on Homelessness, said she wasn’t concerned that only half of SFPD officers had been through the 40-hour program.

“The 40-hour [training] is important,” she said, but SFPD is supposed to be dispatching specialized officers for mental health situations, anyway. “The number of officers trained or not trained is not as big of a deal.”

Moreso, she was worried about officers getting mixed messages from different training programs.

“You go to a course, and you’re trained on CIT. And then you go to another course, and you’re trained on how to increase force,” Friedenbach said. “You’re getting two different messages there: Do you increase force, or don’t you increase force? I’m not saying the training is not important and useful — I think it’s really helpful to have all the police officers trained on this. I’m saying it’s just once piece of the puzzle that doesn’t, in and of itself, solve officer involved fatalities with individuals experiencing mental health crisis.”

Ultimately, Friedenbach said, the city needs to move away from a model where the police department is called to deal with people in psychiatric crises.

Anand Subramanian — the managing director of PolicyLink, a research institute that focuses on police accountability and other equity issues — agreed police shouldn’t be involved in mental health calls.

But he went even further and said he’s lost faith that programs like CIT and other police reform measures are beneficial. He had little interest whether or not more officers went through CIT training.

“Really, what we need are non-police trained mental health professional responses, and so having a conversation about CIT is the wrong conversation,” Subramanian said. “I haven’t seen that training on anything makes any kind of impact.”