The San Francisco Unified School District will no longer partner with or fund the San Francisco Police Department, following a unanimous vote on a resolution today by the city’s Board of Education.

With the exception of Commissioner Stevon Cook, who was absent, every board member voted in favor of a resolution drafted by Commissioner Alison Collins that voids the memorandum of understanding between the district and the police and calls for a greater reliance on community-based violence prevention.

The resolution was partially spurred by the deaths of George Floyd and Breonna Taylor, whose killings at the hands of police caused cities nationwide to reconsider police officers’ role in schools and their treatment of Black and Brown students.

In recent weeks, thousands of San Franciscans urged the district to defund and cut ties with the San Francisco Police Department’s school resource officers program, which currently assigns 12 armed police officers who are specifically trained in youth and crisis intervention to respond to school security issues.

The resolution also said it will start the process of reallocating the $45,000 the district uses to pay the officer in charge of the program to school health and wellness programs instead.

It is not in the school district’s power to disband the program, since it is overseen and funded by the police department. However, the resolution acknowledges that the district will not renew its contract with police, known as a memorandum of understanding, and asks educators to refrain from summoning police officers to respond to minor incidents. 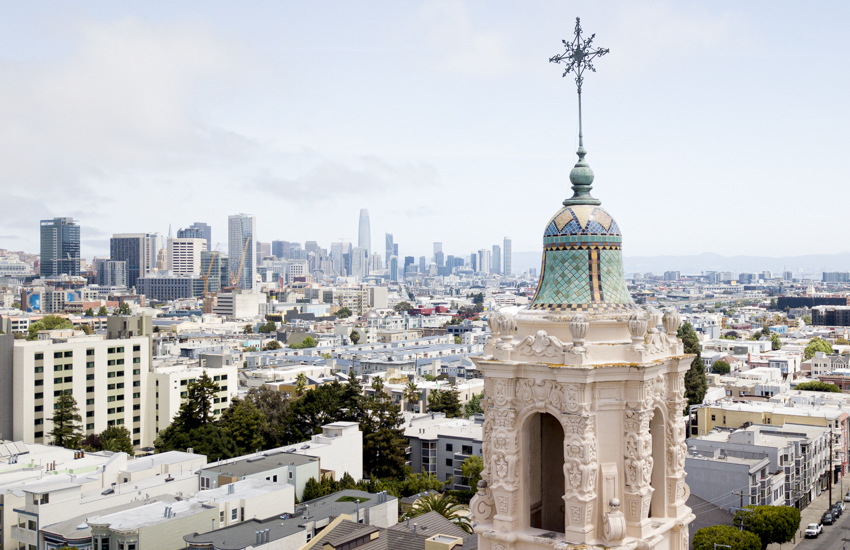 Downtown view from Mission High School. May 9, 2020 around noon. Photo by Kerim Harmanci.

While many called in to the meeting well past 10 p.m. tonight to comment in support of the resolution, there was equal passion from Black parents to hold off on a vote.

Members from the African American Parent Advisory Council, who spoke at prior meetings, said that there have been mixed feelings about the resolution’s move to end the school resource officers program.

Rionda Batiste, a member of the council, expressed the council’s gratitude for being included in discussions about the resolution, but also said that they had some reservations about it.

“We have noted divisions within our own group around the issue of eliminating school resource officers from our schools, because of some members’ fear of removing the only positive relationship we see between SFPD and many of our schools,” Batiste said.

A few others noted how school programs like Operation Genesis — a summer program that helps youths prepare for a criminal-justice career — were positive and started by school resource officers. One parent asked the board to reform the memorandum instead of breaking away from it completely.

Sanchez, Vice President Gabriela López, and Collins all said that they have had heard about instances in which an administrator or staff member unnecessarily called an officer on Black or Brown students or parents.

“For us, most importantly, we want to bring attention to an issue that may be more pressing,” Nelson said. “The criminalization over policing and push-out of Black students by SFUSD educators.“ 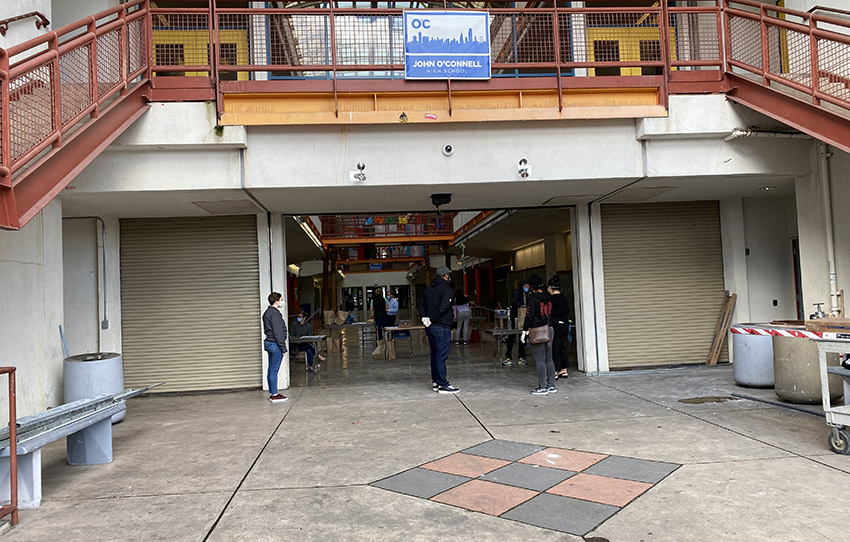 The commissioners discussed these fears after public comment finished and said they would look at internal racial bias as well, which the resolution also addresses.

“That’s exactly what I am trying to call out,” López said at the meeting.

“All staff are directed to do everything legally possible to protect children from witnessing or being subject to engagement with federal, state or local law enforcement on school grounds,” the resolution said.

Kevine Boggess, who helped draft the resolution and is a political director of the community organization Coleman Advocates, said that community-based violence prevention modeled after groups like the Street Violence Intervention Program could be more beneficial to student safety than the police.

“The police were able to get out of [following the MOU] at any time,” Boggess said. “How do we build up the skills and talent and resiliency to be safe without police?”

The SFPD liaison to the school district, Capt. Yulanda Williams, said it is unclear whether or not the program will continue. But even with it gone, officers can still be summoned to school grounds.

Williams said that regular beat officers who may lack the 40-hour youth and de-escalation training her officers undergo will likely respond to these situations, and these officers are also armed.

“I think it will be far more detrimental to suspend [the program],” Williams told Mission Local. A school resource officer “is a more highly trained officer in terms of dealing with young people,” she said.

Tens of people who spoke at public comment during prior school board meetings this month felt that the program and the memorandum failed to keep students safe.

Adanari Alatorre, a student at Herbert Hoover Middle School, voiced her unease whenever she sees a police officer.

“The SFPD should not be around kids my age,” Alatorre said during a board meeting on June 3. “Especially as a Brown person, whenever I see a police officer, I immediately feel unsafe and clammy.”

Parents and former students pointed to incidents at Balboa High School in 2018 and Thurgood Marshall High School in 2002 as deeply traumatic and a sign that even with explicit guidelines for police-student interactions, the memorandum was not working.

“People will talk about the Balboa incident, we learned from that incident and we have not had a recurrence of that,” Williams said, referring to a 2018 event in which a student inadvertently discharged a firearm on campus, triggering a lockdown. The situation also outraged parents because a student was interviewed by police without his parent present.

Officer Michael Hill, a school resource officer from Richmond Station, told Mission Local that in his opinion the program has improved tremendously since he began his duties in the 2018-19 school year.

“We haven’t made as many arrests as before and we definitely have been leaning on restorative justice, rather than making arrests,” Hill said, referring to the program’s relationship with the Street Violence Intervention Program.

Hill, an African American cop born and raised in the Fillmore, said he has had positive relationships with administrators and students; he heads a special homeroom period on Fridays with students at Presidio Middle School and maintains a good relationship with the school’s principal and parents.

He is deeply upset that the program might not survive after the resolution.

“Honestly, I understand what’s going on with the climate with law enforcement and the community, but I felt like I was also saddened because I’ve felt like we’ve made such a great stride in the last three years,” Hill said.

Collins said that this resolution is about keeping the district accountable. At the end of the discussion, all present commissioners asked to be co-sponsors of the resolution.

“There are great school resource officers, but that’s not the system,” Collins said. “We need to fix the system.”