Woman claims Sheriff’s Deputies struck her, others at San Francisco protest — and pointed Taser at crowd 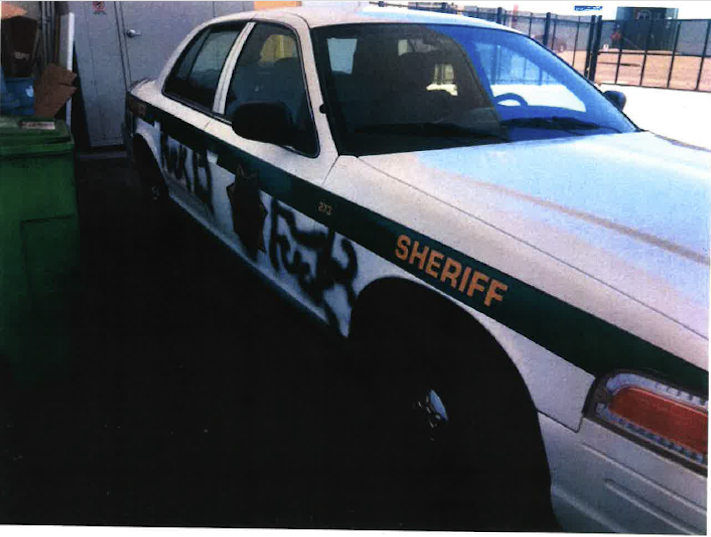 A South Bay woman is claiming that a group of San Francisco Sheriff’s Deputies became violent when questioned by crowd members why they were physically detaining a young man.

Samantha Rhodes, 25, says deputies on June 3 struck her and others with batons without warning; she also says one deputy unholstered his Taser and pointed it at a crowd.

Rhodes, who recently left a position as a spokeswoman for St. Anthony Foundation in the Tenderloin to attend graduate school, was walking to her car near City Hall at the tail end of San Francisco’s day of protests at about 9:25 p.m.

It was at this time, she says, that she saw three San Francisco Sheriff’s Deputies, identifiable via their tan shirts, put their hands on a young man at Polk and Grove streets, and begin to forcibly pull him away toward Grove. When the man repeatedly asked what he’d done wrong, Rhodes says the deputies responded that they “just wanted to have a talk.”

“I walked up to them. I did not touch them. I had my hands in front of me. I asked for an explanation,” says Rhodes. “The three others joined in and asked what’s going on.”

She says she didn’t get one.

Rhodes said the deputies did not answer her or the others nor did they give warning regarding what was to come. “In a split second,” she says, the encounter turned violent. Rhodes — who was wearing a sleeveless shirt and tight pants and obviously not concealing a weapon nor wearing armor of some sort — says a deputy struck her once across the forearms.

She believes at least two of the men who were alongside her were struck as well, perhaps multiple times. Rhodes also said one of the deputies unholstered his Taser — recognizable because of the point of light at its tip and its black-and-yellow coloring – and pointed it at the crowd.

While San Francisco police officers do not carry Tasers — a long-running matter of no small controversy — Sheriff’s Deputies are equipped with the electric stun guns.

Deputies, however, do not universally possess a piece of equipment that is now de rigueur for San Francisco police officers — a body-mounted camera. Sheriff’s Department spokeswoman Nancy Crowley noted that deputies on street duty during demonstrations “were not wearing body cameras. We prioritize those resources for deputies serving in our jails.”

Crowley said that, at around the time Rhodes alleges a violent encounter between deputies and protesters, a person who allegedly vandalized a Sheriff’s patrol car at nearby Van Ness and Grove was arrested.

Of note, the vehicle described in the arrest report and pictured at the top of this article, Car No. 273, is not the vehicle depicted in the Sheriff’s Office Tweet.

A report of that incident states the arrest occurred at approximately 9:30 p.m., after a deputy on a roof spotted a 22-year-old man allegedly spray-painting a patrol car and contacted his on-the-ground colleagues.

It is not clear if the alleged vandal is the man Rhodes saw being forcibly taken into custody by deputies — the arrestee’s age and build match Rhodes’ description of the man she saw, but she could not confirm it was him when shown a photograph.

The report says that deputies on the ground intercepted the man and “escorted him on foot to the loading dock of City Hall.” A search of him turned up no “contraband,” so it is not clear if the 22-year-old was in possession of the spray paint can the deputy atop a roof says he saw. He was arrested and booked into County Jail No. 1 on vandalism charges.

There is no mention in the arrest report of any physical contact between the arrestee and the deputies — and no mention of batons or a Taser whatsoever.

Mission Local was unable to track down the other men allegedly struck by batons. Messages were left for the man arrested for alleged vandalism, but they have not yet been returned.

We have also not yet received any video footage of the alleged confrontation from either City Hall or the Department of Public Health headquarters, both of which overlook Polk and Grove.

Rhodes said it was important for her to push back against the conception that law enforcement showed admirable restraint in the face of large crowds.

“I didn’t want the story to be that sheriffs and police just stood there with their batons and riot gear,” she said. “Just as they do every day, they brutalized folks on the side streets.”

The footage neither confirms nor refutes Rhodes’ claims.

In it, the arrestee can be clearly seen being walked into the City Hall loading dock with both arms restrained by deputies. Moments prior, a melee is visible on Grove, near Polk; at one point an officer runs from the loading dock to join it. The gathering of deputies and protesters is far from the cameras, and at the periphery of their field of vision. It is not possible to see whether the deputies in immediate contact with protesters are swinging batons as Rhodes claimed, because they are blocked from vision by deputies standing behind them. No deputy brandishing a Taser is visible on camera, though there are several odd flashes of unknown origin emanating from the crowd.

The footage is, in short, inconclusive.