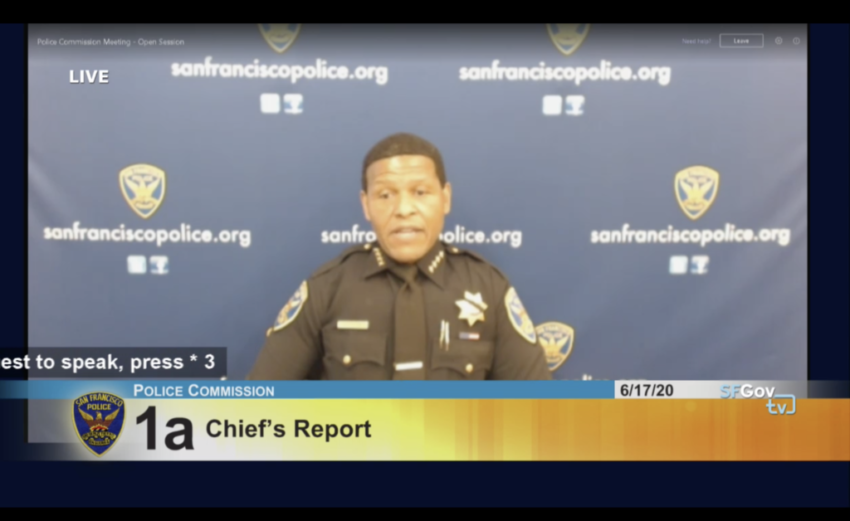 Police Chief Bill Scott vowed to crack down on how police release booking photos, also known as mugshots, which he said contributes to the city’s racial disparities in policing.

“Hopefully we start addressing how booking photos and the release of them may contribute to who is believed to be more prone to commit a crime,” Scott said at a police commission meeting Wednesday.

Booking photos, which are taken any time someone is arrested regardless of conviction, get routinely posted online by law-enforcement departments and media outlets.

Scott argued that the circulation of these photos can foster racial profiling, specifically in regard to Black and Latino communities.

“Those who are stopped and why they are stopped is really attributed to stereotypes,“ Scott said. “There’s decades of psychological research on this topic. Scientists tell us [booking photos are] part of the equation.”

These stereotypes can also impact how officers view Black and Latinx people. San Francisco officers pulled a gun out on a Black person more than twice as often as they did on a white person between October and December of 2018, as Mission Local previously reported.

That same year, out of all the students who were arrested, detained or cited in the San Francisco Unified School District, 42 percent were Black and 35 percent of them were Latinx, according to district data.

And the police are not alone. Last weekend, a viral video on Twitter showed how a white woman accused a Filipino man of trespassing on the Pacific Heights property he lived in.

According to Scott’s recently drafted department notice, police can now only post booking photos if officers need help locating a suspect, if the arrestee is at risk or an imminent danger to the public, or if the individual was convicted of a serious crime.

Additionally, any photos shared with the media must be approved by the police department’s public relations team.

“With a thoughtful process for releasing booking photos, law enforcement agencies may help mitigate or avoid perpetuating negative stereotypes which can contribute to implicit and explicit bias in policing and by community members,” the notice said.

In addition to Scott’s notice, the police commission hopes to outline its own policy on the issue in the form of a general order.

Commissioner John Hamasaki, who brought the issue up to the commission over a year ago, worked closely on the notice with Chief Scott, according to the Examiner.

Hamasaki said at Wednesday’s commission meeting that he remembered how he would see the Tenderloin Police Station’s “long string of Black and Brown mugshots.”

“I guess I come from a position of the people who represent those who end up in the mugshots. Nothing good comes from it,” said Hamasaki, a criminal defense attorney.

Night time burglars arrested by TL officers over the weekend: In separate incidents, Daniel Ernest, 31 & Michael Stone, 46 (fugitive in 2 other burglaries) caught in the act of Burglary & Looting at two small businesses in the TL. $34,000+ stolen goods recovered. Both booked. pic.twitter.com/F1MB5VJt9A

The commissioner also suggested that the police collect data each time a booking photo is released for accountability.

While a final form of the notice still awaits community input, both the commission and the Department of Police Accountability acknowledged its strong desire to pass Scott’s policy as soon as possible.

A finalized policy is projected to be announced in a few weeks.

“Really, this is about getting this done. This issue has been raised for a number of years,” Scott said. “It’s time. Regardless, we’re committed.”