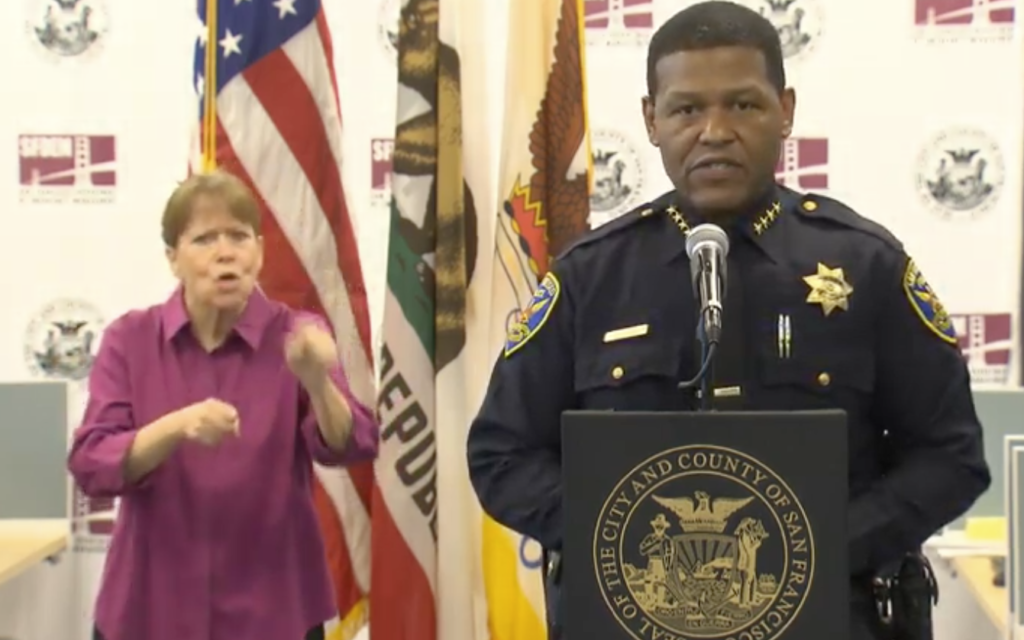 San Francisco’s 8 p.m. to 5 a.m. curfew will continue indefinitely after a destructive Sunday night — albeit one police Chief Bill Scott described as a huge improvement over a chaotic Saturday.

“Yesterday was a good day,” the chief said during a public safety press conference this morning. He said 10 people were arrested last night for alleged looting; overall, 19 cases have been presented to the District Attorney for charging.

In addition to that, 87 people were last night arrested for violating the city’s curfew, and 33 more people were cited in the Civic Center area, with more citations elsewhere. “Overall, though, yesterday was a very good day,” affirmed the chief. “Particularly compared to Saturday.”

The chief said that protests of the police killing of George Floyd in Minnesota — and of police violence writ large — drew perhaps 5,000 or more people to the streets on Saturday. While largely nonviolent, the chief said that two officers were assaulted during the day — one with a skateboard and one with a stun gun-like device. Arrests were made in those instances.

The chief also said that several Molotov cocktails were tossed at officers over the last two days. “We have had people who have come and been in protests to create chaos and were there to take advantage,” he said.

As proof, he cited a firearm and backpack full of fireworks that were confiscated from arrestees last night. He also said officers seized bolt-cutters and other tools used specifically for breaking-and-entering — and that police witnessed a van unloading bricks to toss at officers.

Scott said 208 additional officers drawn from state agencies via mutual aid were a difference-maker Sunday night — a move that the chief said led his officers to have “a sparkle in their eye.” Officers from as far off as Santa Barbara and the state’s extreme north were on the streets of San Francisco Sunday night.

That was a marked change from Saturday, when he described the San Francisco Police Department as “overwhelmed.”

On Saturday, numerous fires were lit and heavy vandalism and looting took place in the Downtown-Chinatown-Union Square-SoMa areas.

Scott, like all the speakers at Monday morning’s press conference, lavished praise upon Mayor London Breed, who was not present. He also repeatedly complimented her decision to impose a curfew on San Francisco residents.

“We’ve been given the tools to do our jobs, and the curfew is another tool,” he said. “I understand how restrictive this is. It’s almost unprecedented in this city, but it’s something we have to do to keep order in these times.”

It is not clear if any quantitative measures need to be met before the curfew is rescinded. Scott only noted the need for “order” to return to the city.

“If people want to express themselves, we welcome you to San Francisco,” he said. “We need you to do it peacefully.”