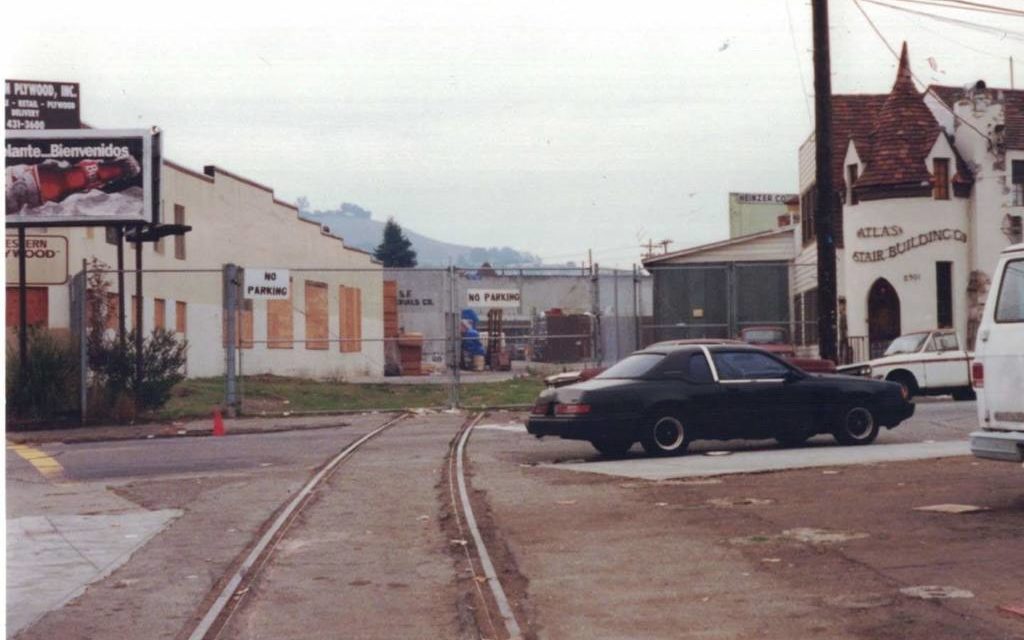 On a quiet Sunday in December of 1992, Bill Cassidy took pictures of the railroad tracks that once guided Southern Pacific trains down Harrison Street from the 1890s to June, 1991 – the year that freight trains left the streets of the Mission.

That year, the parent company, the Southern Pacific Transportation Company, went out of business and Cassidy, a switchman for Southern Pacific until 1986, knew the tracks would vanish someday from Harrison Street. He wanted to take pictures of them before they became a dim memory.

“I was taking a photo class at City College,” Cassidy recalled the other day. “I started at 16th Street and took a picture of every corner from 16th to 22nd street.” 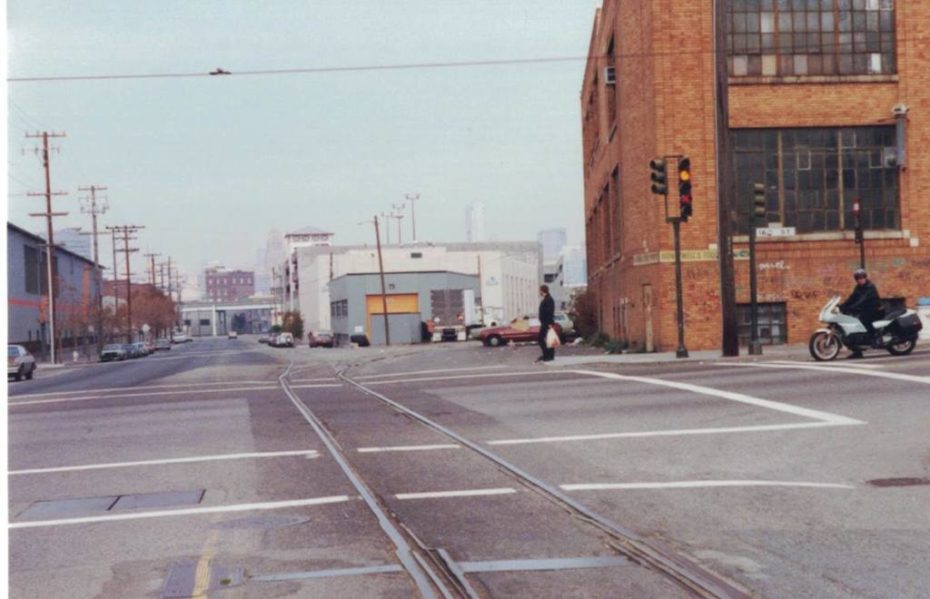 Southern Pacific Transportation Company’s decision to stop running freight in the city triggered a four-year lawsuit, which failed to assign an owner for Parcel 36, the last undeveloped right of way. The parcel has yet to emerge from that legal limbo..

“I knew that in the future there wouldn’t be any trace of the Old Main Line,” he said, flipping through a pile of Kodachrome photos. “I did it for historic purposes. I thought maybe someone would be interested to see what it used to look like.”

Tracks were a familiar feature in the Cassidy family. Cassidy’s father Patrick, an immigrant from Donegal, Northern Ireland, worked as a foreman for Muni. Bill Cassidy began working with Southern Pacific in 1952 after a short stint as a Marine in Korea.

He attended classes at City College in the morning and worked in the afternoon at the Southern Pacific yard, which stretched from South San Francisco to the Embarcadero. “I worked full time,” he said. “I learned by taking trips for the first two weeks with a crew.”

After that, he started switching cars from one track to another and kept at it for 34 years. “A switchman pulls a switch to put the car on the proper track for his destination. It’s like a ballet,” he said. “I was pretty agile. You have to be, to move trains. They don’t stop very fast.”

Southern Pacific was a very “dynamic” company, Cassidy said. “They’d lower their rates, force others out of business and then raise their rates again!” He made $16.82 an hour. “Old railroad guys used to tell me that working for the railroads was the Cadillac of jobs.”

Cassidy, who only suffered one industrial accident during his career as a switchman—he dropped a heavy metal plate on his left big toe—demonstrated a few hand signals that the foreman used to direct the engineer. His gestures were still precise and emphatic, necessary for visual legibility in a large site like a train yard.

Second street near the waterfront was his first assignment. “Good conditions, lotta work, lotta boxcars. It used to be a working waterfront. It was my favorite site. But I’m not gonna tell you why. Good conditions! That’s all I’m going to say. I want to create a mystery.”

Cassidy also worked on the Old Main line, which entered the Mission at Bryant and 11th, and ran down Harrison Street and out to Valencia Street to Noe Valley.

“The trains were there before the houses,” Cassidy said and then listed some of the businesses that lined Harrison Street.

“Regal Pale Brewing Company—they were on the northwest side of Harrison at 20th. I remember that. That building on the corner of Treat where it splits off from Harrison? They used to make coffins there.”

Pacific Cement and Aggregates was another site he remembered. “We’d bring ‘em sand and gravel in a car called a hopper. The bottom open and the aggregate poured through. That’s the cement that helped build the city.”

What is now the Evergreen Restaurant at Harrison and 18th was the Southern Pacific switchman’s office. “That used to be where we’d start work,” Cassidy recalled.  “Clock in and clock out. We called it The Shanty. Painted yellow and brown. Now it’s a restaurant. But it still has the old concrete floors!”

Cassidy’s still tracking the changes on Harrison Street. Last year, he went and looked at the Southern Pacific Brewing Company. He came away disappointed. “I don’t know why it’s called that. It has nothing to do with SP.”

Cassidy maintains a mostly benign attitude towards the Mission’s transformation from a neighborhood of light industry to a mixed-use retail and residential district, with condominiums lining Harrison Street.. “Be fearless. What can you do? People don’t like change. But everything changes, anyway. Look at me. Most of my friends are gone. And here I am.” 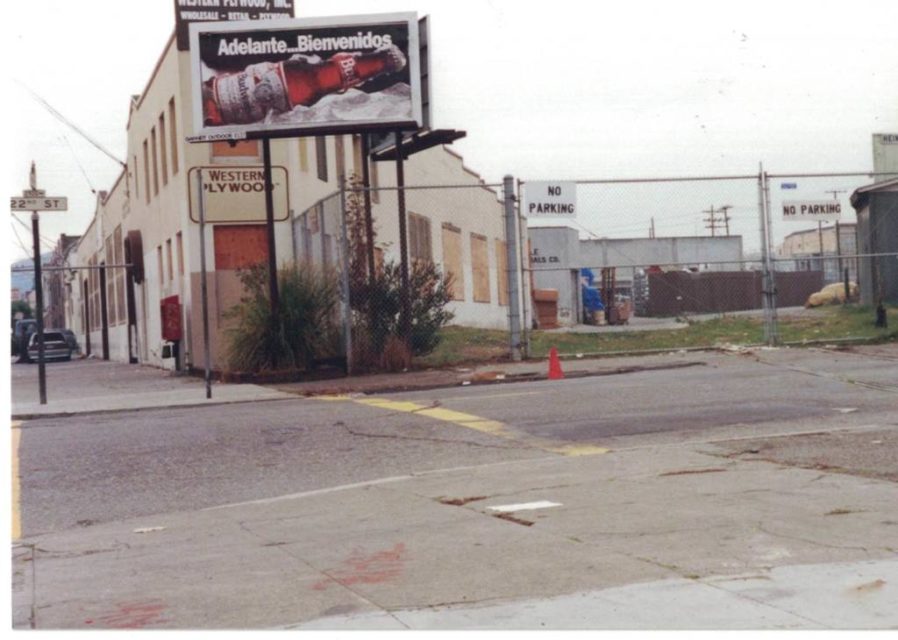 The intersection of Harrison and 22nd street, December 1992. Photo by Bill Cassidy. 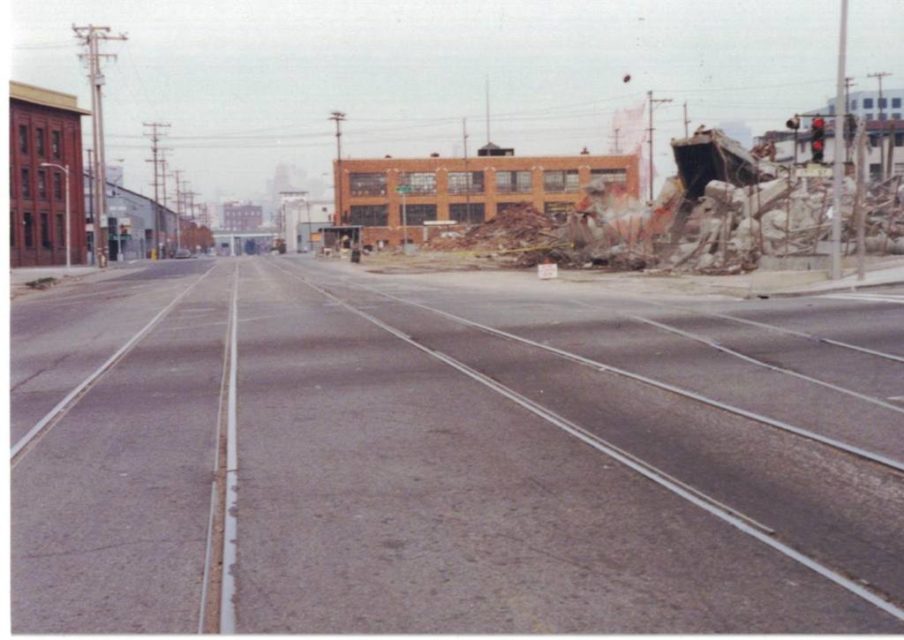 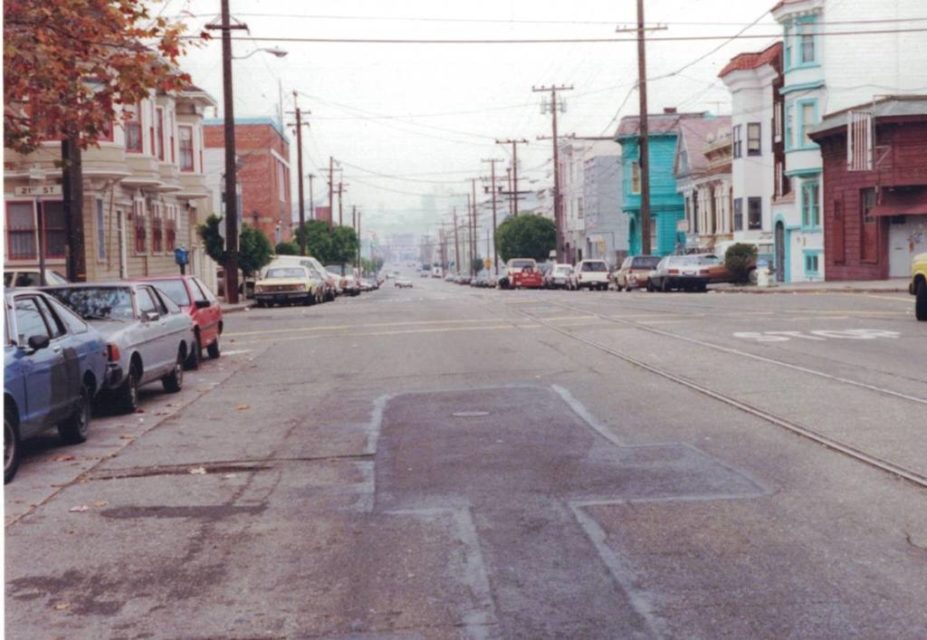 Looking north on Harrison at 21st street. 2495 Harrison, the brown building on the corner was New Blamey’s Tavern until 1964 and Hobson’s Choice tavern thereafter. Photo by Bill Cassidy. 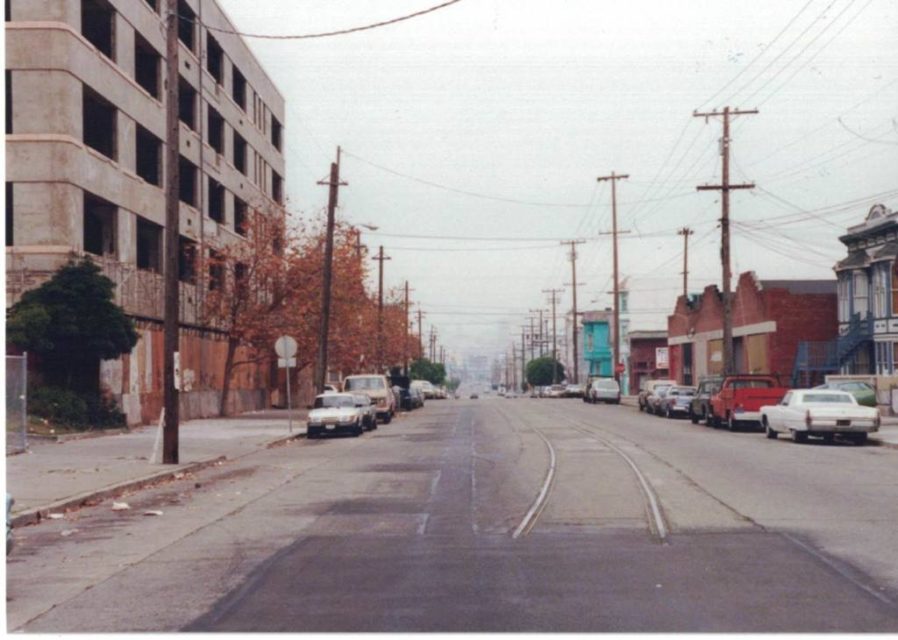 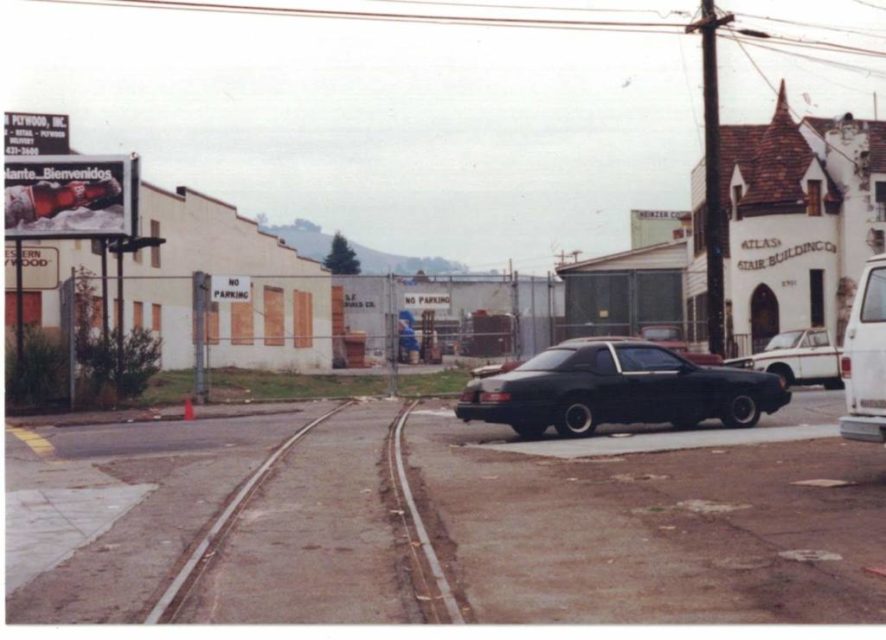 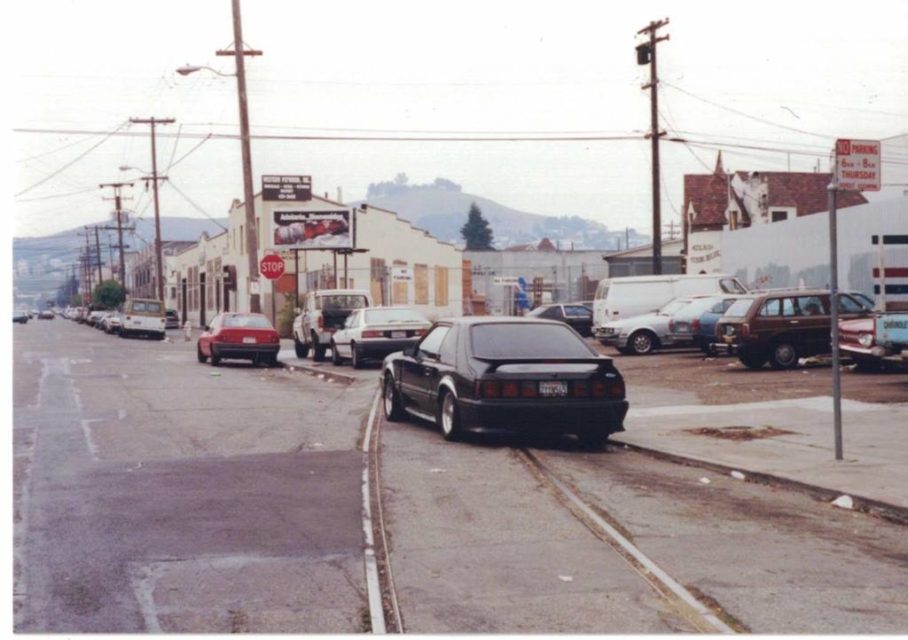 A view of the vacant lot at the intersection of Harrison and 22nd streets, 2958 Harrison St., home to Sushi Hon. Photo by Bill Cassidy. 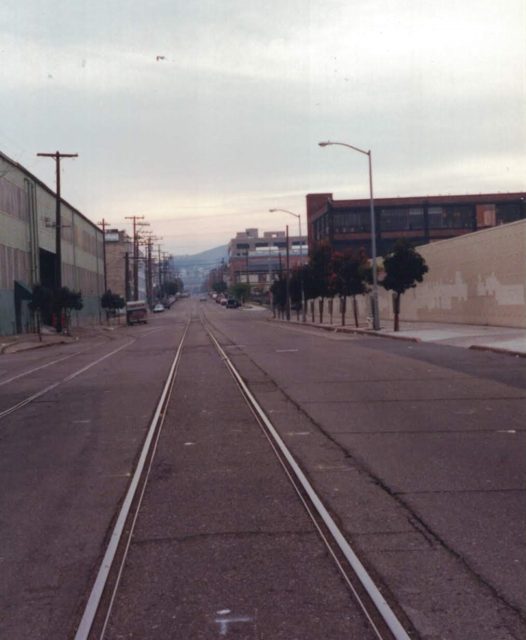 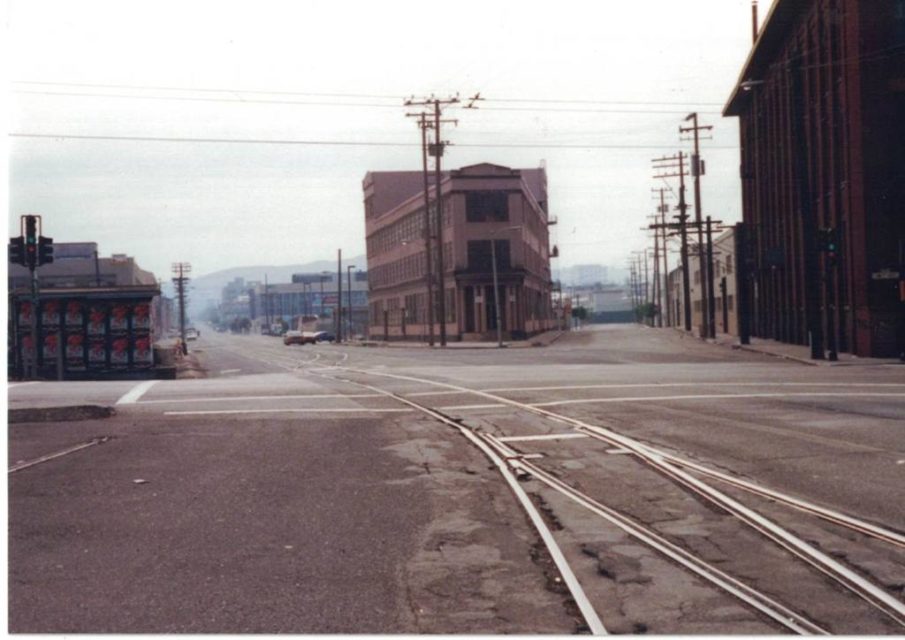 Looking south at the confluence of Harrison, 16th and Treat streets. Photo by Bill Cassidy.