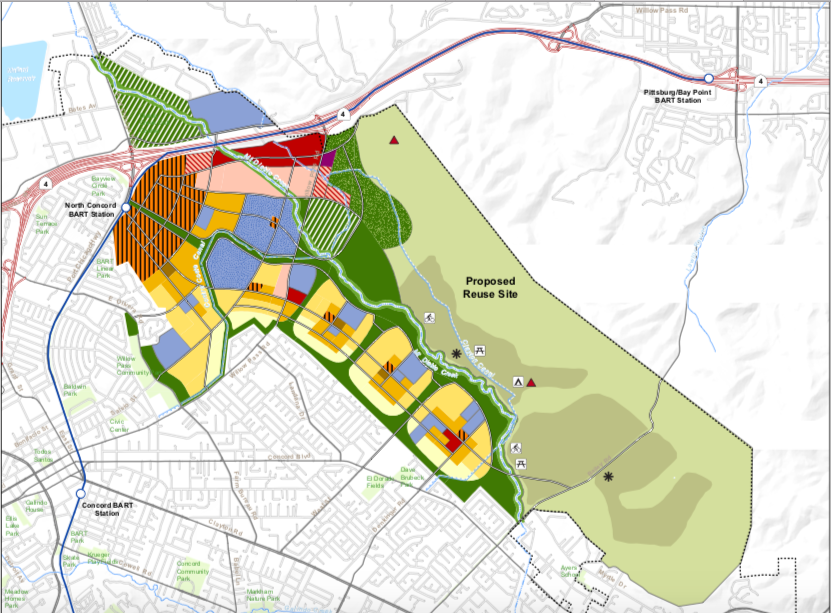 This 13,000-unit development plan is billed as a ‘once in a lifetime opportunity’ — and, damningly, that may be so

Concord, for many San Franciscans, is an abstract concept. It’s a name on a map or a BART marquee that only becomes a real place after you fall asleep aboard one of the trains and miss your stop (and many stops thereafter).

But Concord is very much a real place and, unlike Las Vegas, what happens here doesn’t stay here. On March 12 and the days thereafter, this may become all too apparent to even San Franciscans, who are predisposed to ignore even the existence of the smaller towns surrounding us, let alone their arcane development and political battles.

This date is the put-up or shut-up deadline for a long-planned 13,000-unit housing development slated for the former Concord Naval Weapons Station. This sprawling site for years housed bombs and chemicals we shipped overseas and dropped atop people living even further from here than Concord.

Now it’s slated for a truly massive development of the sort everyone but everyone in the Bay Area says they’d want. Of those 13,000 proposed homes, 25 percent would be affordable. Not one but two BART stations serve the area — as do multiple freeways and a regional airport. There would be space for retail and offices so that not only could people live here and commute (on rail) to the central Bay Area — people could live here and work here and not drive at all.

Nobody would be displaced by this project, save for concrete bunkers and moldering ordinance. Transit-friendly housing, abundant affordable housing, jobs, amenities, retail, offices, parks, open space, a college campus, four elementary schools, a middle school — it sounds too good to be true.

You can see where this is going. The smart money is, come March 12 — facing late-hour demands from labor that even third-party economists calculate would render the project infeasible — developer Lennar will walk away from the table and it’ll all implode.

Despite what you may have read on housing Twitter, housing economics isn’t simple. But this is: Shit rolls downhill. If 13,000 units — which would house 25,000 people or more — aren’t built on BART-adjacent land in Concord, the ramifications will be felt here in San Francisco.

And not in a good way. 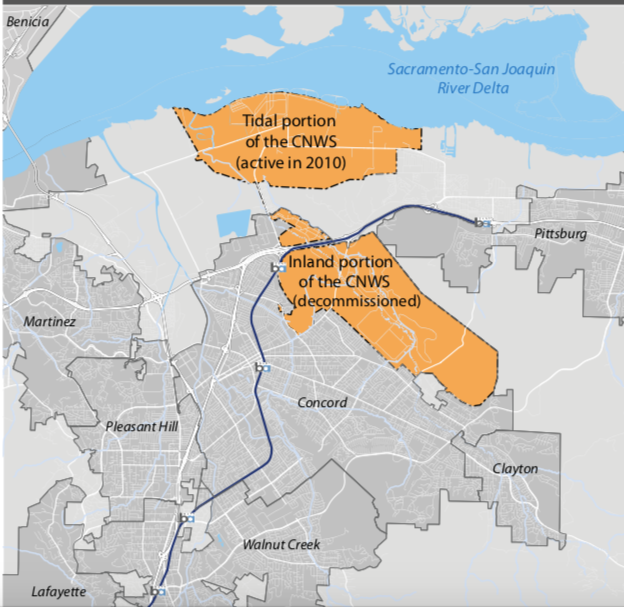 Those are successful guys. Their teams listened, and they built dynasties.

In Concord, we’re on the way to building nothing.

So, it’s hard to say that any of the directly or indirectly connected entities to this 13,000-unit, 25 percent affordable proposal have demonstrated appropriate fear, considering that the entire enterprise is teetering on the precipice. Considering what’s at stake here, we’re not even seeing the vituperative public comments and mobilizations and avalanche of mean Tweets that might accompany a potential San Francisco development literally 1 percent the size of the Concord Naval Weapons Station plan.

Concord, for too many of us, remains an abstract concept.

How did we get here? How did we take this long road that may yet lead nowhere? As you’d expect in a situation involving thousands of acres, billions of dollars, and a Russian novel’s worth of characters negotiating and leveraging one another, it’s complicated. 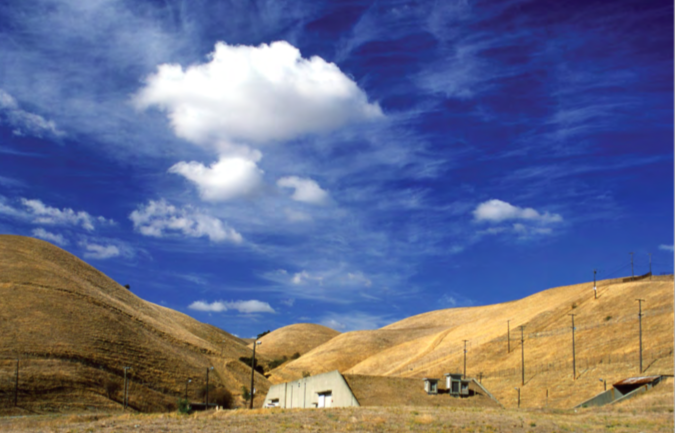 This shot, from the cover of the project’s voluminous Environmental Impact Report, demonstrates the status quo at the Concord Naval Weapons Station.

After many years of formulating grand plans for the fallow Naval Weapons Site, Concord in 2016 signed a term sheet with megadeveloper Lennar. Many parties were involved in the crafting of this term sheet, including organized labor. The developer was required to negotiate in “good faith” with labor regarding a wall-to-wall “Project Labor Agreement.”

It is, in a nutshell, a negotiated deal setting the terms of a major construction project. Unlike “prevailing wage,” which mandates how workers are to be treated and compensated, a project labor agreement can do more — it can, in essence, dictate who those workers will be.

Unions, you’ll be shocked to discover, would like to see union labor on these projects. It’s not enough that everyone be paid and treated well: In Contra Costa County especially, organized labor has been loath to agree to a project labor agreement where the jobs don’t, in practice, become all-union.

Fair enough: As the kids say, shoot your shot. But there is literally a document, in writing, regarding what Lennar is required to do and there is, literally a section in it regarding a project labor agreement — and labor’s present demand that a wall-to-wall agreement be a binding condition isn’t in there.

Labor and the city of Concord could’ve in 2016 put it in there. This demand could’ve been formally listed, in writing, as a necessity for the development coming to pass. Cost estimates could’ve, in 2016, moved forward with this in mind.

But that didn’t happen. And now labor, at risk of scuttling the project, is demanding a wall-to-wall agreement — or else. 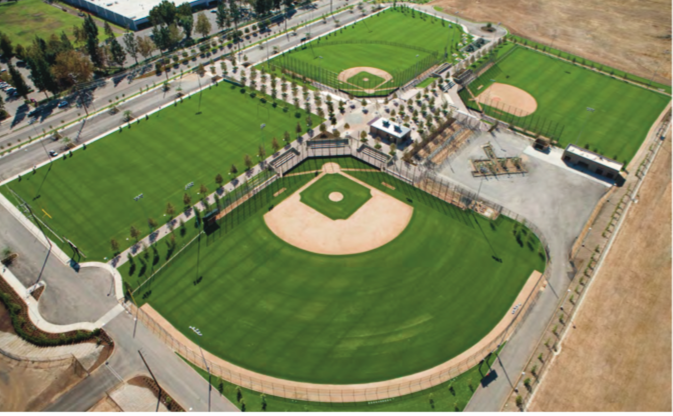 This verdant sports complex was planned for the site — along with a college campus, multiple K-12 schools and 25 percent affordable housing on a 13,000-unit project. C’est la vie.

“The issue of how much union labor the project can afford is a fundamental one,” says Guy Bjerke, the Concord staffer helming this development. “The unions believe it can afford more and Lennar believes it can only afford so much.”

Like boxing, however, there’s a third judge here. In September 2019, the Concord City Council was presented an economic analysis undertaken by its own economists — and it by and large backs up the developer’s assessment: Labor’s late ask would add more than half a billion dollars to the tab. This, the report states, would push the developer’s estimated near future returns into the red.

It remains to be seen whether Concord’s elected officials choose to acknowledge the numbers calculated by their own number-crunchers.

An aside here: Your humble narrator’s heart does not especially bleed for developers or megadevelopers crying poverty. Additionally, your humble narrator is a member of a union, the son of a former union attorney — who once, literally, cross-examined an employer out of a chair — and the grandson of a man who made Bernie Sanders look like Barry Goldwater.

And yet, it’s hard to insist a private developer undertake a deal that even third-party economists predict won’t make money; that’s why Lennar has given every indication it’ll walk on March 12.

It’s also hard not to fault Concord elected officials for their passivity and acquiescence here to labor’s demands for concessions that weren’t on the term sheet. In case you were wondering, yes, organized labor has an influence on politics and politicians, and, yes, part-time elected officials may not be the best people to oversee decades-long, multifaceted $6 billion regional development deals.

It’s all wickedly complex stuff, but this isn’t: The most politically viable move at this point may be to let the project sink beneath the waves and then point fingers and shrug shoulders. The safe bet, as ever, is always on entropy.

Concord may be an abstract concept to San Franciscans. But the housing crisis — reverberating back to this city and beyond — is not.