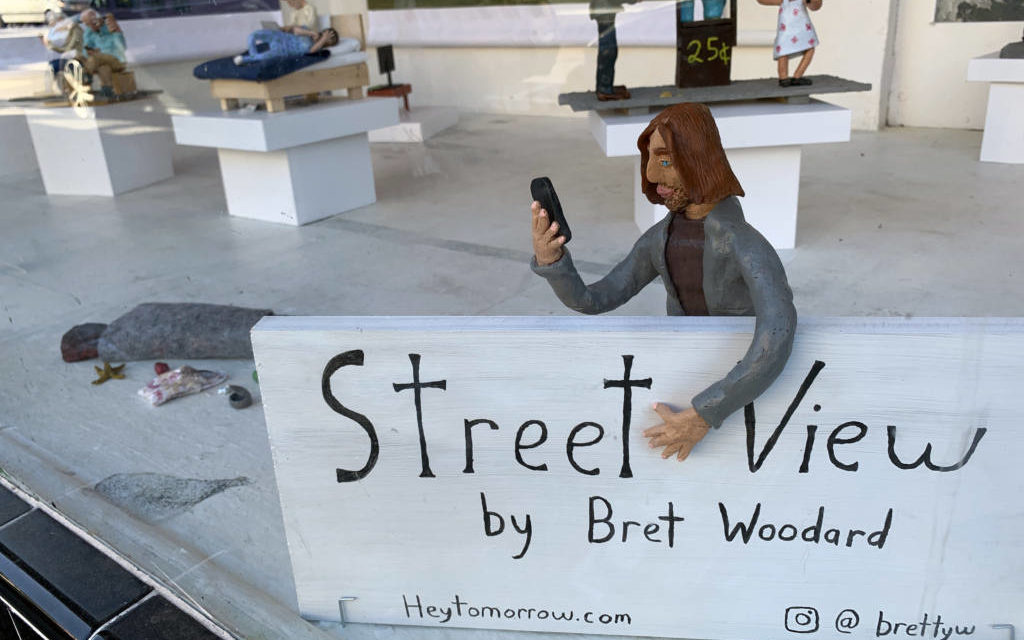 Bret Woodard was walking through his neighborhood in the Mission one afternoon two years ago when he noticed two older gentlemen sitting on a bench during lunch time. They were on their phones as a pigeon looked up at them. 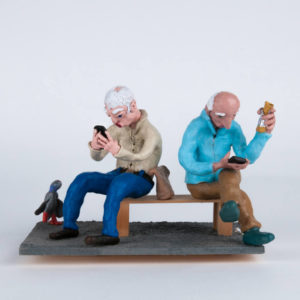 “What if one is texting their grandchild and the other one is looking at family photos?” he thought, imagining a commentary on how the use of technology can be seen as connecting rather than dividing. That experience became his first inspiration to sculpt clay scenes depicting street life in San Francisco.

“Street View” is a seven-piece clay sculpture exhibit currently on display at the Artists’ Television Access at 992 Valencia St. until Sunday, February 23.

Woodard generally works in photography, but he said that he intentionally used another medium to depict the relatability of the live scenes.

“This is so true,” a cyclist said while glancing through the exterior window at a sculpture of a man bombarded with screens. He pointed at the scene to his friend: “He has a phone, a TV, and still has an iPad all in front of him.” He continued laughing as they biked away.

“You can’t really do that in photographs to do it justice,” said the 34-year old artist. “There’s something about making the clay scenes that gave it almost a child-like viewpoint or humor.”

Woodard said that although he’s only been doing it on the side, he has sculpted clay all his life.

Almost all of the clay sculptures on display are elevated on platforms, except for two of homeless men lying on the ground with their faces down.

“A lot of times we interact and deal with homeless people that we almost look down on them,” Woodard said. “They’re not Jim, they’re not Sally, they don’t have a name.”

Beside one of the homeless characters is an “Open house/For Sale” advertisement for a 1,750 square-foot, three-bedroom, 1.5-bathroom house worth millions of dollars. 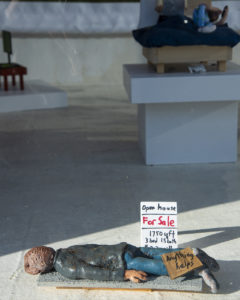 “Anything Helps” by Bret Woodard.

“I don’t ever want to photograph the homeless person because it’s kinda crossing the line of their space,” he said. “With clay you can evoke these things without pinpointing a specific human out; you can speak more to a broader issue.”

As an artist residing in the Mission for the past decade, Woodard said that he has always wanted to exhibit some of his work at Artists’ Television Access, an artist-run nonprofit organization “that cultivates and promotes culturally-aware, underground media and experimental art.”

“Finally being able to land it was incredible,” he said referring to the left window space. Woodard said that he would like to keep finding new homes for the sculptures after its exhibit run in the Mission. It’s “almost endless what you can do with them,” he said.

“Street View” is open for public viewing 24 hours a day at the Artists’ Television Access at 992 Valencia St. until February 23. Woodard will be at the exhibit on Friday, February 21, between 6:30 and 7:30 p.m. 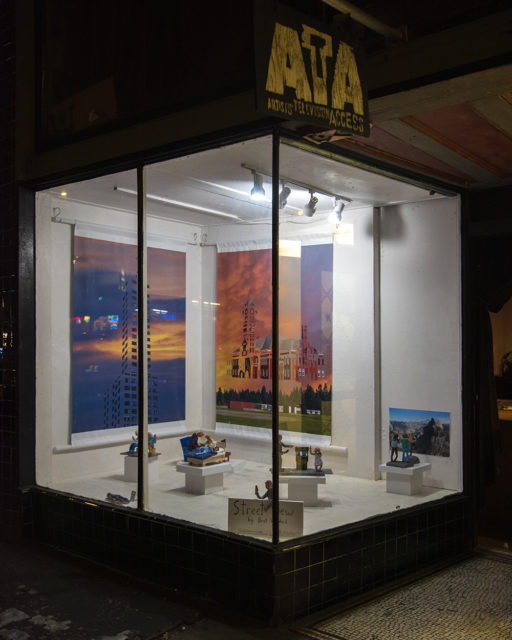