A week before Christmas on a rainy night, I was walking home past Iglesia Presbiteriana de la Mission on 23rd St. when I heard a familiar voice. It was my friend, Joseph Stewart, who was huddled in his sleeping bag in a corner of the church entrance. I shared some oranges with him. I asked how he was doing. He asked for money to buy a blanket. I took this photo with a passerby who was unaware of Joseph huddled in the doorway. 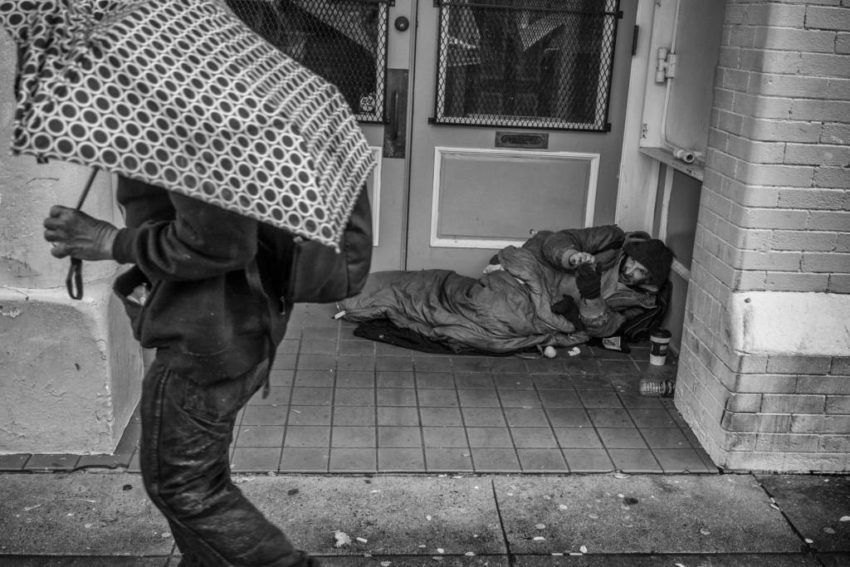 I met Joseph for the first time a few years ago. I found him not only an interesting person, but he also had perhaps the most expressive face of any person I have met. He told me about his brother, Daniel Emory Plegar, with whom he shared everything. Together they would pool their resources and get a room in a hotel. This would last until their money ran out, and then at the end of the month, they would live on the street.

When I was learning to use a view camera, I spotted Joseph sleeping at the Polish Hall near my house. Joseph allowed me to photograph him and was patient during the twenty minutes it took to set up the camera for the shot. We were talking and he told me his brother had spent the night with a woman he had met. I ran into Joseph a couple of days later and promised to get him a print of the photograph. Joseph told his brother had been admitted to General Hospital. Two days later, when I brought Joseph the print, he told me his brother Daniel had died. This was a real blow to Joseph because they did everything together and depended on each other.

After that Joseph began staying nearby and I saw him more often. He told me that it gets lonely on the street and he appreciates having people to talk to. More than once he complained about his stuff being stolen or being robbed during the night when he was asleep. Sometimes he would stop by my house and yell for me. I could not hear him, but my dogs always did, so I would come out and talk with him. What he wanted varied: water, something to eat, a place to store his sleeping bag for the day so it wouldn’t get stolen, a loan to last until the end of the month. About six months ago, his health seemed to be declining and he started using a walker.

The Monday before Christmas, Joseph had come to my house twice asking for me. The second time he had done something unusual for him, he had come up the front steps instead of yelling my name. I was not home either time. A couple days later, I heard third hand that Joseph had died. It was either the day he came to my house, or the next day. I tried calling Zuckerberg General Hospital, their morgue, and the city morgue but could find nothing. A week later, I heard, also third hand, that someone had seen him. It has been a month now, and I have not seen Joseph around the neighborhood. I am losing hope that he is still alive. 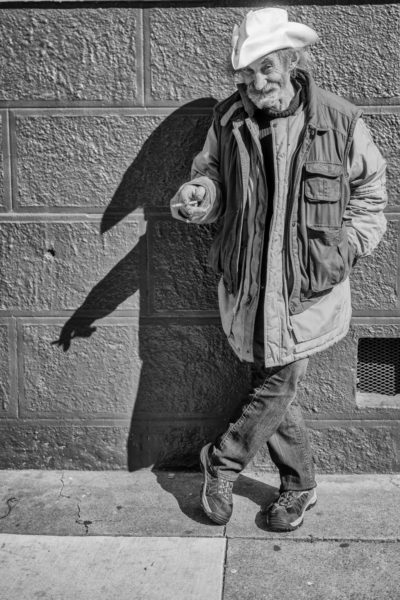