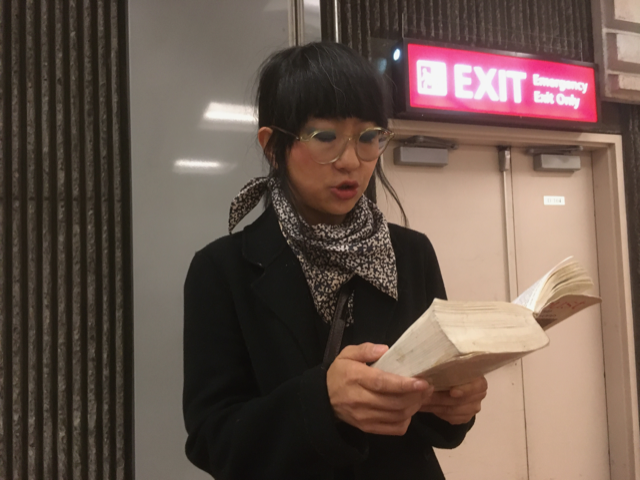 Nathalie Vanderlinden wants to tell you a story. Photo by @Kasumi

Some of you may recall our Dec. 2 article about Nathalie Vanderlinden, the San Francisco chef who, in her off hours, read all of Marcel Proust’s Swann’s Way in BART stations and other public places.

Vanderlinden’s two-hour stints reading from Proust in area rail stations, it turns out, was just her opening act. On Dec. 19 and 20 in Brussels, the Belgian completed her goal of reading Swann’s Way in one 19-and-a-half-hour sitting.

“You go through several phases,” Vanderlinden says of her marathon reading experience. “I took only several little breaks to use the restroom or drink tea or eat apples and oranges. And I had good practice, but had never practiced for more than six or seven hours in a row. But I trusted my body would work. And it did.”

Vanderlinden, perhaps, came out of the gate a bit strong. She started at 11:30 a.m. on Dec. 19 at Ateliers Mommen and, after six hours, began to feel her voice strain. She read in a very low voice for the next two hours — but that was okay, as, by that point, there was nobody in the audience.

When people filtered back in some hours later, she, rather literally, found her voice. “I found a way to read that did not hurt my vocal chords,” she explains. “It was low, not using the high pitch. Magic, really.” 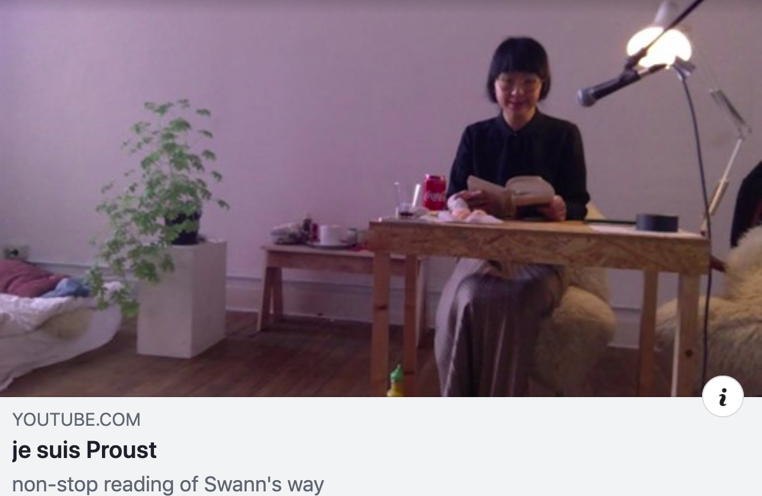 In November, Vanderlinden explained to us why she’s chosen to read from Proust in public.

“I wanted to put myself into this world,” she told us then. “I was so frustrated writing poetry [in French] and nobody reading it. Nobody even understanding it. So this is how I started. I wanted — how do you say? — I wanted to put literature into the world.  To make it alive.”

So, that happened. And, she says, it’ll happen again. In January, keep an eye out for her in BART stations and elsewhere reading from the second work of Proust’s seven-part In Search of Lost Time masterwork, In the Shadow of Young Girls in Flower.

“I wanted to do something very challenging and physical. And I did it. I can tell you that Proust is definitely changing my life. And it is only the beginning.”