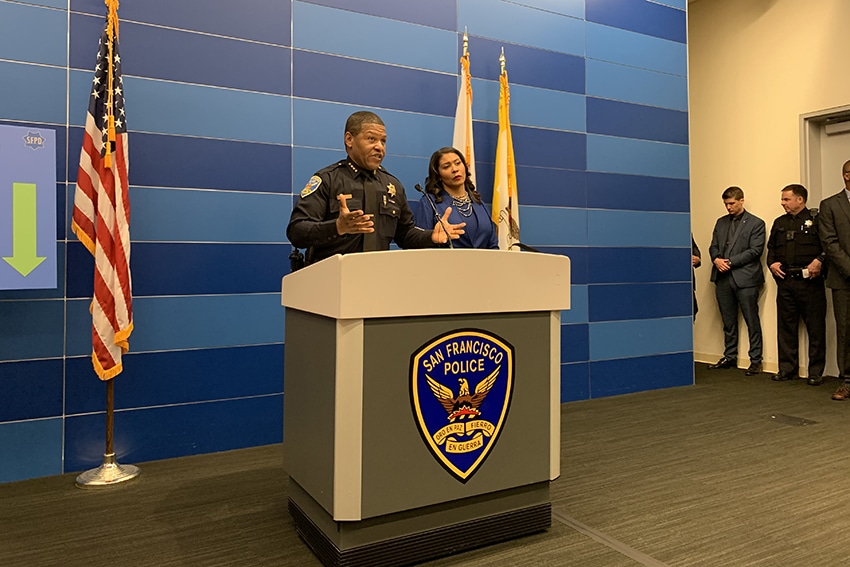 Violent crime and property crime declined across the city in 2019, with homicides dropping 11 percent citywide and 50 percent in the Mission District, according to the San Francisco Police’s CompStat Report for 2019.

“Forty-one homicides are of course 41 too many, but the fact is, this is the lowest number of homicides that we’ve seen since 1961,” Mayor London Breed said at a noon press conference where she joined Police Chief William Scott to announce the numbers.

Five of the city’s 41 homicides happened in the Mission District, a significant drop from the 10 cases in 2018.

Aside from homicides, the number of reported rape cases went down citywide and in the Mission, 15 and 22 percent respectively. Robberies, however, presented a different story, with a 4 percent drop citywide and a 4-percent increase in the Mission District.

The report also highlighted a 4-percent decrease citywide in Part 1 property crimes and a 15 percent decrease in the Mission. These include cases of burglary, vehicle theft, larceny and car break-ins. With more than 25,000 cases of car break-ins last year, Chief Scott admitted the so-called smash-and-grabs are still a challenge.

“That’s a very difficult crime to solve,” Chief Scott said. He said that some perpetrators of car break-ins are repeat offenders. “We try to focus on those crews and individuals we know are prolific,” he said. “We track who we arrest, we also track when they get out and if we get evidence or receive evidence that those individuals are involved in further car break-ins then we try to devise strategies to capture them again.”

Although car break-ins are only down 2 percent citywide, they fell by 17 percent in the Mission.

“Since 2013, our city has had a steady decrease in violent crimes, as we shifted our resources to impact areas of the city that are impacted the most,” said Scott. “We have to work with community-based organizations and community members to adjust our strategies to each neighborhood across the city.”

He and Breed attributed the decrease in crime rates to the work of those who serve in the police department.

He said that these officers will be assigned on the streets as part of their crime prevention strategy.