Poll: 97% of San Franciscans see homelessness as a problem — 69% approve of homeless housing in their neighborhoods An intriguing poll released yesterday by the nonprofit Tipping Point Community should provide some ammunition for politicians and community leaders fighting to expand homeless services and housing across San Francisco.

The poll, conducted by EMC Research in late 2019, queried just shy of 1,200 San Franciscans. And, counter-intuitively, a full 69 percent of respondents favored “building housing with supportive services in my neighborhood to house up to 100 people experiencing homelessness.” (emphasis ours)

The goal of this polling, said Tipping Point communications manager Matt Menezes, was to “activate neighborhood support for housing in every district of the city — specifically in housing people in homes that already exist and helping them afford rent and helping with whatever supportive services they need.”

This polling, he continued, “demonstrates support for this type of solution is widespread” and can help “overwhelm and outweigh any neighborhood opposition by activating this larger silent majority.”

Tipping Point in 2017 put $100 million into an ongoing effort to reduce chronic homelessness by half — the largest donation of this kind to date. 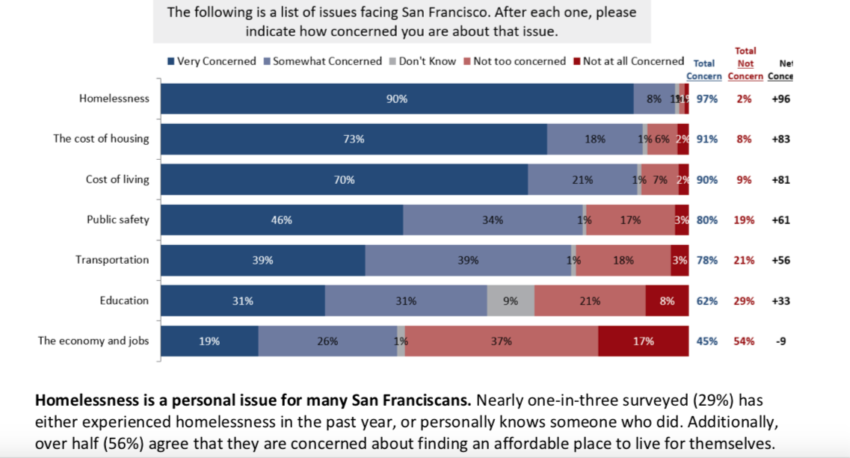 While support for building or otherwise providing homes for the homeless was lower in the city’s more residential districts, “it wasn’t by as much as you’d think,” noted Menezes.

The 69 percent tally among San Franciscans asked if they’d support the construction of supportive housing in their neighborhoods is a blend of residents from across the city. But the variances weren’t wildly apart. In the south (districts 10 and 11) 72 percent said yes; in the northeast (Districts 2, 3, 5, 6) it was 70 percent; in the west (Districts 1, 4, 7) it was 68 percent; and in the central (Districts 8 and 9) it was 64 percent.

The message to anyone pushing for such housing in their neighborhood, says Menezes: “You are super not-alone.”

The poll results were particularly gratifying for Supervisor Matt Haney, who has penned legislation to mandate a Navigation Center in every city district.

“I think this means that people are ready for solutions. Sometimes we get stuck on this narrative that people are opposed to everything in their backyards. That’s often not true,” he said. “This makes me feel like we’re on the right path. I hope the mayor sees this. I hope the Department [of Homelessness and Supportive Housing] sees this. And I hope my colleagues see this.”