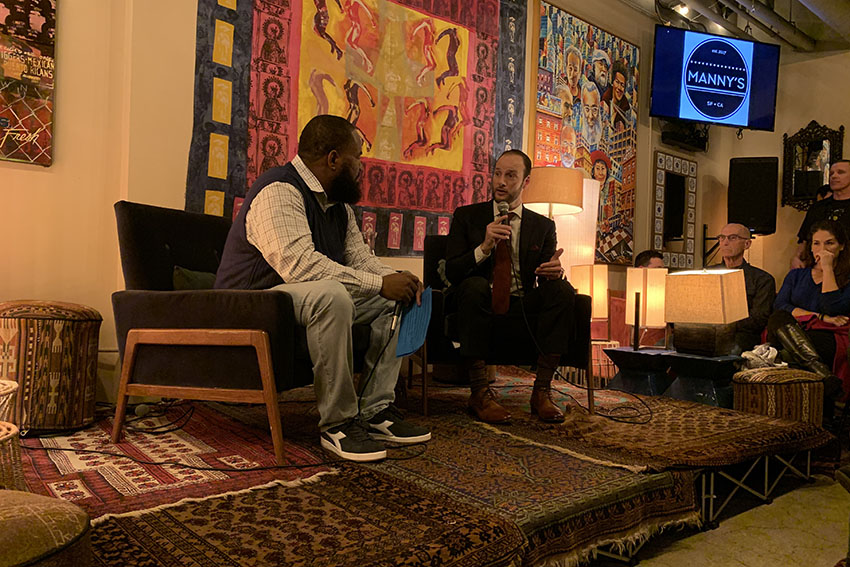 San Francisco’s new district attorney, Chesa Boudin, sat down for a conversation with PRX Ear Hustle producer Earlonne Woods Wednesday night at Manny’s on 16th Street and Valencia — his first public appearance since taking the oath of office on Jan. 8.

With about 200 people in attendance, it was a standing-room-only crowd of San Francisco residents of all ages. The conversation focused on Boudin’s plans on following through with his campaign promises on criminal justice reform and working with critics of his campaign.

The public defender-turned-prosecutor has already started pushing to enact two major policies on his first two weeks in office. Last week he launched the Primary Caregiver Diversion Program, which is a pretrial diversion program for parents of minor children. Both of Boudin’s parents went to prison when he was just 14 months old; he says he was also a victim of their crimes. He said that victims are “an afterthought to the state” and his diversion program would keep families together while also facilitating immediate rehabilitation of defendants.

Boudin also announced that on Wednesday, he introduced a policy to end cash bail in criminal cases in San Francisco. “We will never put a price tag on freedom,” he said. Although judges still have the power to impose cash bail, Boudin said that his office will object to such moves.

“We seem to have a limitless budget for punishment,” he said. “We can hold people accountable without sending them to prison.” In line with Boudin’s campaign, a lot of the conversation revolved around restorative justice and rehabilitation.

Woods — a former San Quentin inmate whose show explores stories of prison life — asked about Boudin’s position on California Penal Code 1170-D. That’s a provision allowing the District Attorney to review cases for resentencing. Boudin said that his office will take advantage of the provision; with some applicable prosecutions going back decades, Boudin said that everyone’s case deserves to be reviewed.

Boudin said that throwing people in jail has been the “first response to all our social problems” and that he intends to change that. “Bring that humanity, bring that compassion,” he said. Boudin discussed his plans to close Juvenile Hall and decrepit County Jail 4, and his opposition to the state’s three-strikes law. He also said that it has been the “default approach” for prosecutors to oppose releases during commutations. “We have better things to do than oppose,” he said. This statement also reflected his stance on working with his critics.

“I have your back,” he said about working with law enforcement agencies. Boudin said that he doesn’t have any hard feelings towards critics of his campaign. He mentioned that he already had productive meetings with, among others, the police department and its union, the Police Officers Association.

However, the district attorney admitted that “equal enforcement of the law” is a challenge in terms of holding police officers accountable — and penning statewide legislation or otherwise altering laws regarding police use-of-force is not necessarily within the purview or scope of his office.

Boudin said he encourages everyone to stay informed and engaged with the work of his office. He said that to keep the “movement active,” he and his office will “stay in campaign mode.”