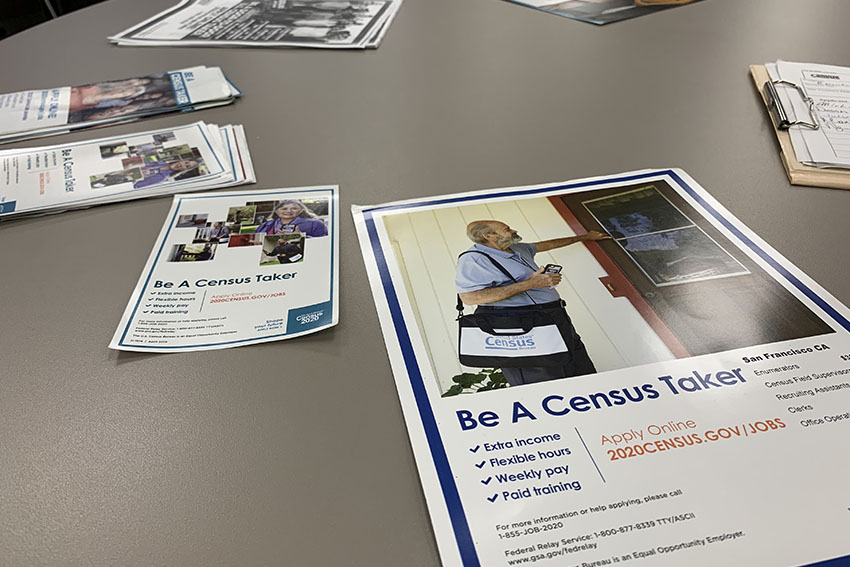 Tuesday marked the “first enumeration” or the beginning of the 2020 census count, as U.S. Census Bureau Director Steven Dillingham visited the remote fishing village of Toksook Bay, Alaska while census staff in San Francisco continued to recruit workers here for the four-month count that will run from April 1 to July 31, 2020.

The two very different places offered distinct challenges. Alaska’s remoteness means census takers try to get a head start on reaching people living on frozen grounds. In San Francisco, officials must overcome the difficulties of finding census takers in a city with a low unemployment rate.

“That’s how far the census goes to make sure to include everybody,” Alex Darr, the regional technician for the Oakland Area Census Office, said referring to Dillingham’s Alaskan visit. “Similarly, that’s the kind of effort that we want to put in here in San Francisco.”

Darr leads the recruiting effort in San Francisco to find an estimated 273,000 temporary workers in California for the 2020 census. So far, 187,000 have applied, but they will be taking applications until early March.

“Anybody can apply,” Darr said. “If we are unable to find citizens to fill specific language roles, basically translation roles, we are authorized to hire non-citizens.” The Census Bureau website lists a pay range of $27-30 per hour for hired applicants in San Francisco County.

Every Tuesday until March, job seekers can apply to become census takers, recruiting assistants, office staff, or supervisory staff for the Census Bureau. It is part of the JobsNOW! Recruitment event at the Human Resources Agency located at 3120 Mission St.

Darr said that it is challenging to hire in a city with such a low unemployment rate. “We are not only looking for people who need work,” he said.  “This is a way to act upon a civic duty,” in the once in a decade event.

On Tuesday, the job seekers trickled in.

“Excuse me, can you help me with something?” a woman approached Darr asking for help with her census job application. Joyce Williams, 65, said that she does not have any experience with census jobs before but she knows what the census is all about. “It’s been happening all my life,” she said. “This time I was right here and I was available.”

While waiting to schedule her fingerprinting, Williams seemed to know a few other applicants in the room. They chatted like friends or neighbors. “But I don’t [know them],” she said laughing. “I met them last Tuesday,” which was only a week ago when she started her census job application, she said.

Williams said that aside from getting her basic information, she was asked about how she would approach different kinds of people. “It’s just the type of work I like to do: outside, dealing with people, free,” she said.

“There is almost nothing that we do that literally includes every single person in our society,” Darr said.

This Thursday will be the “first wave” of selecting applicants for various jobs, according to Darr. But the recruitment effort continues until March.

The Census Bureau also has two big recruiting events called the “Side Gig of the Decade” on January 30 at St. Vincent de Paul and on February 1 at the San Francisco Public Library.