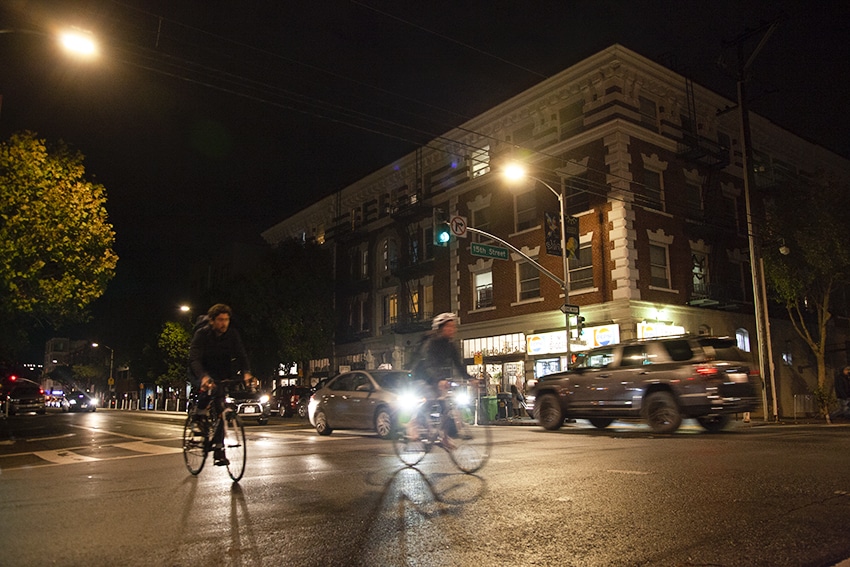 15th and Valencia streets, where a man was dragged by a moving car on Tuesday. Photo by Abraham Rodriguez.

In a troubling Tuesday rush-hour incident, a man being dragged by a speeding truck collided with another vehicle going west at the intersection of 15th and Valencia streets. Police are categorizing the incident as a hit-and-run.

Witnesses told Mission Local that the victim was hanging on to a rope attached to a speeding truck, and pleading for it to stop. When the truck crossed the intersection, the man smacked into another car moving in the same direction.

According to San Francisco Police Department spokesman Officer Robert Rueca, the incident happened at around 4:55 p.m. on Tuesday, and the victim was subsequently transported to a “nearby hospital” — presumably San Francisco General Hospital. He is being treated for non-life-threatening injuries.

Sean Nishi, who works as a server at Little Star Pizza on the corners of 15th and Valencia streets, said he saw the man being dragged by the truck as it crossed the intersection going west on 15th Street. The victim was hanging on to a rope tied to the truck and was yelling at it to stop.

Nishi said that the man collided with the rear of a sedan driven by a person who had been picking up food on Valencia Street.

“When I came out, he was beneath the rear tire. It looked like he had been run over, but he hit the back and got tangled,” Nishi said.

Nishi described the man as a Spanish speaker, who was still moving and in pain when the ambulance arrived.

The driver of the sedan stayed on the scene, but the truck sped off.

Another witness, who identified himself as Gianluca and works at Munroe Motors on Valencia Street, said he also saw the man get dragged through the intersection, Gianluca also said that the victim had been holding a rope attached to the truck.

The investigation is ongoing, Rueca said.