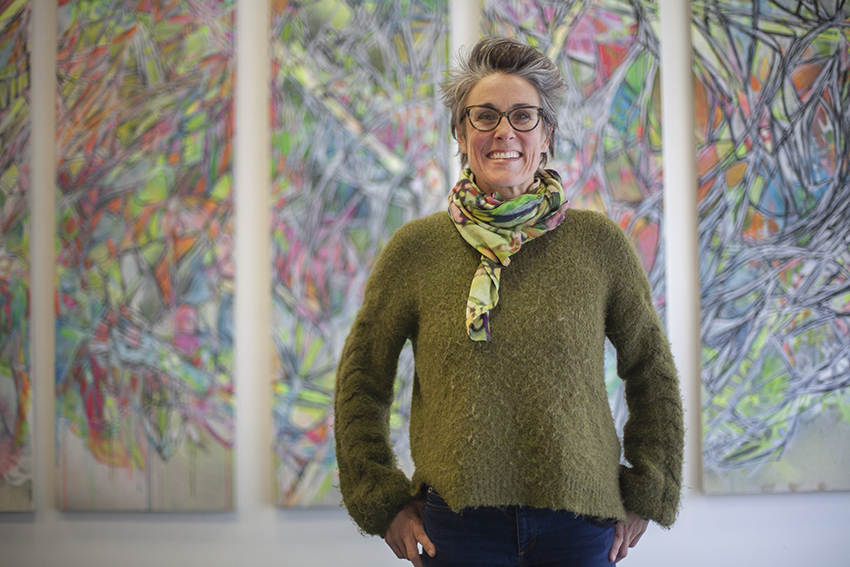 Renee DeCarlo at ‘The Annex’. Photo by Abraham Rodriguez.

In years prior, the rectangular-shaped space at 2675 Mission St., near 23rd, used to be home to a clothing store. Once a western outlet that sold boots and Stetson hats, it was taken over by an urban clothing business called Kick’s around 2013 that offered acceptable prices on throwback 49ers jackets and sneakers.

By 2018, Kick’s was on life support. Its owner told Mission Local that it was getting harder to sell merchandise, and he would likely end up having to move out. He did.

The space stood unused for most of 2019. Yet in the waning days and weeks of the year, this 2,600-square-foot shop was retooled into something else: an art gallery, workshop, and event space. It’s being spearheaded by an artist who thinks art should be far more visible to the public.

Art galleries have been on the rise in the Mission — as have empty retail spaces. But some of these empty storefronts are being turned over to artists on short-term leases. In November, Mission artist Sirron Norris held his first art opening in seven years at an empty retail spot at 3135 24th St. with a three-month lease he was given for free and used the space to hold workshops with kids and adults.

Now DeCarlo is hoping to do the same, and even expand on the idea.

DeCarlo is a local artist who, for the past year and change, has run The Drawing Room, just around the corner at 3260 23rd St., near Capp. She said she wants to use the former retail space on Mission Street as a place where people can interact and congregate around art made locally. Tentatively calling it Annex,” the ultimate goal is to bridge the disconnect between artists and locals, hold events and workshops, but also allow artists to work there.

While The Drawing Room provides a space for artists to be creative and show their work, DeCarlo said it’s a much sleepier vibe here on 23rd than on Mission Street.

On the weekend of Dec. 12, DeCarlo organized the inaugural event at Annex, a holiday art market called “ArtWrap” that drew in hundreds of people and was part of ArtSpan, which organizes the Open Studios art crawl. Then on the weekend of Dec. 20, she held another show that drew at least 40 people — and managed to a sell few hundred dollars worth of art pieces made by locals.

Most of the folks who stepped into Annex, DeCarlo said, randomly dropped in from the street and the public’s interest was almost immediate.

“In the four days it’s been open, it’s been interesting to see the community’s response,” she said on Dec. 24. “The fact that people are buying art is weird;  I didn’t expect it and I’m excited by it.”

The Drawing Room has created a sort of community rallying around DeCarlo’s for-profit shop. A lot of locals stop by, chit-chat, and buy locally made clothing, pictures and paintings. The front windows allow anyone walking on 23rd Street to peer in and get a glimpse of locally produced paintings, skateboards, and panels hanging on the walls.

It also helped spawn DeCarlo’s Annex idea. She said that around October, she was approached by the owner of the Mission Street building as he walked past her shop and was asked if she wanted to use the empty space. The owner has been trying to rent it out for a while and it in the meantime, wanted to lease it out to artists.

Since Kick’s closed in 2018, the space had fallen into disrepair and was not habitable.  The electrical wiring had shorted out and had to be replaced entirely. Originally signing on for a three-month lease, DeCarlo said most of November was spent repairing some of the damage. She did not, however, pay for it out-of-pocket.

Once the issues were sorted out, DeCarlo enlisted the help of volunteers to help paint the walls, remove the clothing store’s fixtures and help decorate. A majority of the paint was donated, and most of the art inside Annex were all made by women.

The maintenance issues and redecorating postponed Annex’s first show until early December. It will host shows on the weekends until February. 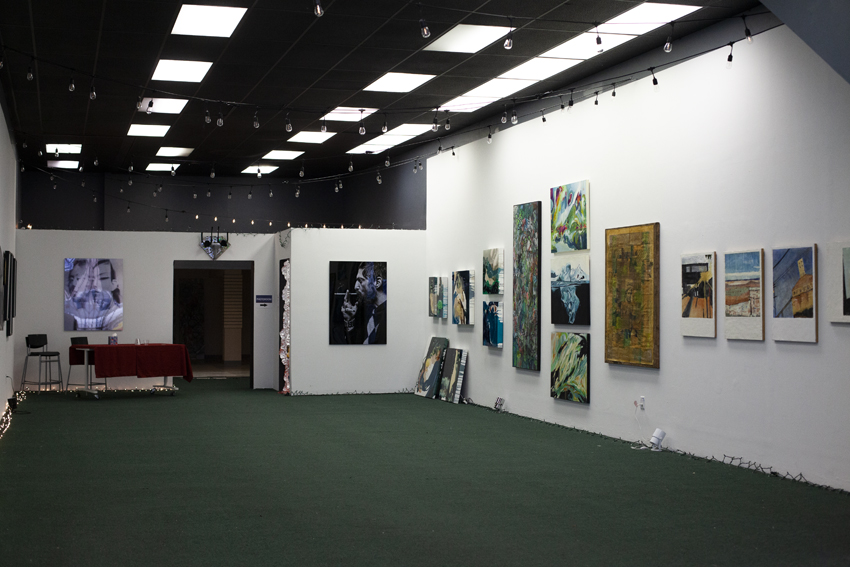 Interior of The Annex near 23rd and Mission St. Photo by Abraham Rodriguez.

On Jan. 23, Annex will host a show with Tom Seligman, a former director at Stanford’s Cantor Arts Center, where some of his pieces will be sold. The opening will start at 6 p.m. and ends at 9 p.m. It will also be a fundraiser for the Annex

DeCarlo hopes to raise enough cash to help get a long-term lease for the Mission Street locale. Ultimately, she hopes to run it as a for-profit business with investors dedicated to the arts.

“I could see figuring out another way to do this at other storefronts, having artists in there doing events or special projects,” she said. “Just keeping those spaces alive.”