Though just 26, R.K. Johnson has seen a lot. When we queried what “R.K.” stands for, she matter-of-factly replies, “Roadkill.”

Johnson, homeless for the better part of a decade, is now a shelter client advocate, in the employ of the Eviction Defense Collaborative. She has, again, seen a lot. It’s not easy to surprise her. But the statistics on how many emergency overnight rain shelter spots are going unused during the ongoing deluge — that surprised her.

During the downpour of late November and Early December, the city’s “cold and/or wet weather procedures” were triggered. Seventy-five additional spaces were opened up in city shelters as a result of the storms.

Now this, in itself, is a bewilderingly meager number in a city where thousands of people sleep on the streets every night, rain or shine, and abject misery is visible around every corner. Seventy-five mats on the floor can barely begin to meet this city’s needs.

And yet, barely half of those few spaces are being filled.

Between Nov. 26 and Dec. 5, no more than 43 people took advantage of the city’s 75 additional wet-weather shelter spots. On most of those nights, fewer than 40 people showed up. On Dec. 5, only 34 did.

Abigail Stewart-Kahn, the director of strategy and external affairs for the Department of Homelessness and Supportive Housing, found a silver lining in these numbers.

“This is higher than it was last winter season,” she said. And that’s true: The last time it was wet enough to warrant the city opening extra shelter space, in January and February, as few as 29 people a night availed themselves of the services. “So, I’m encouraged by that.”

Others were less sanguine. District 6 Supervisor Matt Haney rang in 2019 by expressing mortification with the city’s efforts to shelter the homeless during storm conditions — and he’s ringing it out that way, too.

“To put out only 75 mats is embarrassing. For only half of them to be used? Common sense tells you that’s a huge failure,” he said. “It’s just unbelievable that with 10,000 people who are homeless and 1,000 people on the shelter wait-list, there aren’t 75 people who want to be inside during pouring rain and near-freezing cold.” 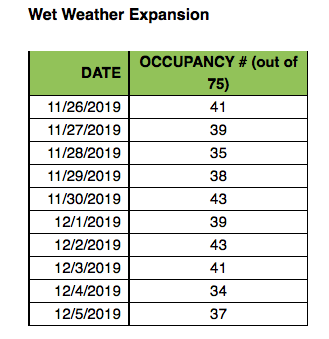 The city’s “Cold and Wet Weather Policy and Procedure for Unsheltered Persons Experiencing Homelessness” is not a brief document. How could it be, with that kind of title?

The city will rustle up 25 to 75 extra mats if one of the following conditions presents itself:

Yes, the last one is a joke. The first three are not. This is a six-page document and, while interdepartmental memos outlining coordinated efforts can’t be improvised and require some level of complexity, something is being lost here. The predictability for the city’s Unsheltered Persons Experiencing Homelessness to think “it’s cold! It’s raining! I should go to Place X!” is not there.

By design, in fact. The city doesn’t want homeless people to simply come in out of the rain. It wants them to call 311 and make a reservation.

The 75 extra spaces are in extant shelters and Stewart-Kahn says the locations aren’t shared publicly “to avoid confusion in having people arrive there when they aren’t open.” To find out where to go during a severe storm, a homeless person, additionally, must call 311 after 8 p.m.

This is because the spaces serving as emergency shelters are often being used for other things until then, and, at that late hour, it’s clearer how many reserved beds are going unused, and will be available to drop-ins.

Fair enough: Those are reasonable concerns. But let the record show that, in the month of December, the sun sets at 4:50 p.m. So it’s asking a bit for a homeless person to wait three hours in the dark and with 0.74 inches of rain puddling around her to make a call on the phone to then be told there might be an 11-hour mat on the floor of a shelter-to-be named.

Frankly, it’s asking a bit to put so much initiative on the city’s homeless population. The Department of Homelessness has beefed up its notifications on when it’s rolling out the additional sleeping spaces — media and service providers are given a heads-up, and Stewart-Kahn thinks this is why a bit more people are now showing up.

But the homeless themselves are not contacted. Advocates have asked for shelter information to be scrolled on digital Muni signs, where it could be easily read. Many of the 1,000-plus homeless men and women on the city’s shelter waitlist leave their phone numbers so as to know if a spot opens up. It stands to reason that the city could set up an automated service to call or text these people.

That would probably be a welcome change from the computerized Borat-like scam calls addressed to “Dear Citizen” and warning recipients of the impending “canceling of all social benefits.” A man watches TV amid trash bags at a homeless shelter on Capp and 21st. October, 2008.

These steps aren’t being taken. At least, not yet. But what if they were? Well, two scenarios present themselves. Neither is entertaining.

If more homeless people know exactly where the emergency rain shelters are, the crowds that show up could well exceed capacity, highlighting the paucity of resources allocated here.

San Francisco, it turns out, is a pretty bewildering place. You can’t get 75 homeless people in out of the rain. And the reason why is: You can’t do this small thing without addressing the very, very big things that make homelessness endemic. This city has too few shelter beds. The shelter experience is unsuitable for many homeless people. This city has too few long-term beds. This city has too little housing. And, all the while, the city continues to push the homeless out of sight, often depriving them of their meager possessions, often offering them little in the way of assistance, and often doing so in the wet and cold conditions that spurred the opening of the emergency shelters so few people are using.

Our policies are working against one another. And it’s not working.

And so, when Roadkill Johnson walks home at night — and there is a home now, for her, her two kids, and her two dogs — she sees what we all see. Homeless shelters, with tents pitched right outside. She’s seen a lot. But it never gets any easier.

“I could not make this up,” she says. “People find shelter outside the shelter. It’s just really disheartening.”