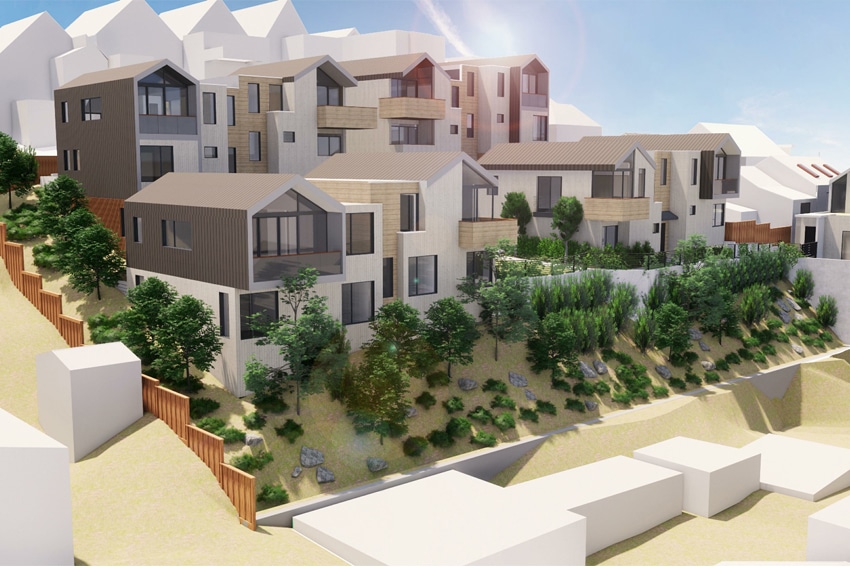 A rendering of 1513 York St., a new 10 unit development in Bernal Heights. Courtesy of Kerman Morris.

It took four decades, but on Thursday, a 77-year-old developer made Bernal neighbors happy enough to win the Planning Commission’s approval for 10 new units of housing. The project includes five new duplexes that will be built on two empty parcels on the slope of Bernal Heights, located off 1513 York St. near Cesar Chavez.

The parcels also happen to sit in the middle of a residential block, and its sloped angle long raised neighbors’ concerns over earthquake safety, water runoff, and mudslides.

Patrick Quinlan, the owner of the 17,400-square-foot lot, has been working on the project for most of his adult life — going through two architects, four design versions (costing some $2 million), and four attempts with the Planning Commission.

“I thought it would end in bankruptcy. It’s a happier ending than I thought,” Quinlan said after Thursday’s vote.

Quinlan bought the lot with his friend Merle Honaker in 1978 from the Gavriloff Family of Santa Rosa for $45,000. 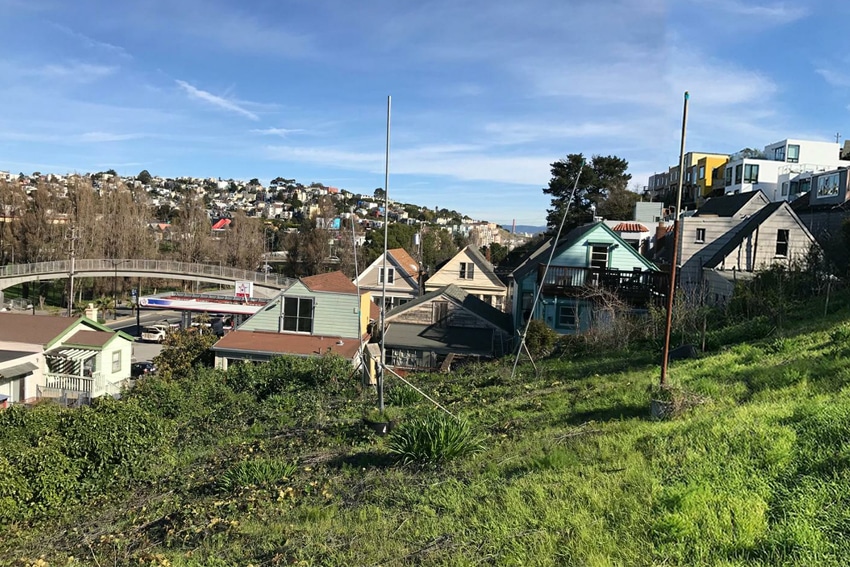 An eastern view from the two lots inside the York Street block in Bernal Heights. Photo courtesy of Patrick Quinlan and Kerman Morris.

On Thursday, the project finally won support from many neighbors, including Kathleen Campbell, who lives on York and had opposed the development since 1997. After seeing the latest design, she changed her mind and wrote a letter in support of Quinlan.

“The current proposal is the best option we’ve seen in over 22 years,” Campbell wrote in an email. She praised the efforts of the team to really listen to the neighbors’ concerns and address all issues.

The slope will also be smoothed out, reducing any danger to homes sitting below the hill.

A common green space in the middle will allow for views of the city and the bay and will be planted with native plants and grass. To address fire concerns, the architect added two fire hydrants and enough space for emergency crews to pull in.

One of the duplexes will face York Street and have one parking space for each of the units. The other four will face north and will not have parking. Instead, they have hillside views of the Mission and downtown.

One below-market-rate unit is included in the plans.

Quinlan’s quixotic odyssey started when he was a contractor for the San Francisco Unified School District in the 1970s and would visit his carpenter friend, Honaker, in Bernal Heights. The two had never built anything like a home and decided to purchase the lots.

Steve Gavriloff, a real estate agent in Santa Rosa, said his grandmother Matilda sold the lot back in 1978 after checking the deed online. He had no idea they even had something like this in San Francisco. He was about 10 years old then, but his grandparents and parents have been in the real estate industry for as long as he could remember.

“I never knew my family had a lot like this. I knew they had flats,” Steven Gavriloff said. 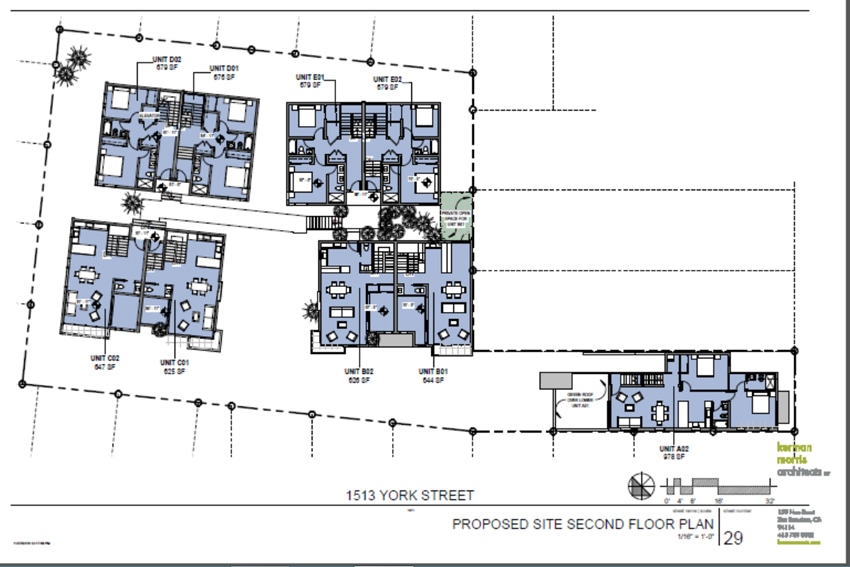 Plans for the 1513 York St. development. Courtesy of Kerman Morris.

Buying the property proved easier than developing it. Honaker eventually dropped out of the project in 1983 but was replaced as a partner in the project by another friend of Quinlan’s.

In 2018 after several failed attempts to get approval, he parted ways with his longtime architect Stephen Antoneros, and then hired Kerman Morris, an architecture firm that has experience building in sloped hills located off Duboce Triangle who reworked the plans. Antoneros said there were no hard feelings, and he was happy to move on to smaller projects after working on the project for over two decades.

Brechin Flournoy, a homeowner who lives on Cesar Chavez, told commissioners in 2018 that she was concerned about potential debris and water runoff falling into her backyard. She’s still not thrilled about the project. In an email to Mission Local, Flournoy said she was not excited about the prospect of living near a construction zone for two years.

“It will be terribly disruptive, and I disagree with putting so many units and a parking garage into that space. Why the City and the Developer insist on overbuilding is beyond me,” Flournoy wrote.

Yet the newest proposal won over other neighbors and the commission.

“I’m delighted to see this project is a great example of densification in context,” said Commissioner Kathrin Moore, who voted against Quinlan’s plan in 2018, but was now satisfied with the presentation.

“Anybody can put in two large buildings; few people have the skill to add something where the densification is natural.”

Commissioner Frank Fung said that he had never seen a landlocked lot get developed, while Commissioner Myrna Melgar praised the engineering behind a water capture system that would insert drain water into a cistern.

“I also like how the project works with the slope and not against it. Everything about this works, even the thoughtfulness of dealing with the water and water runoff,” Melgar said.

With a motion to approve, all commissioners voted together in favor of the project. 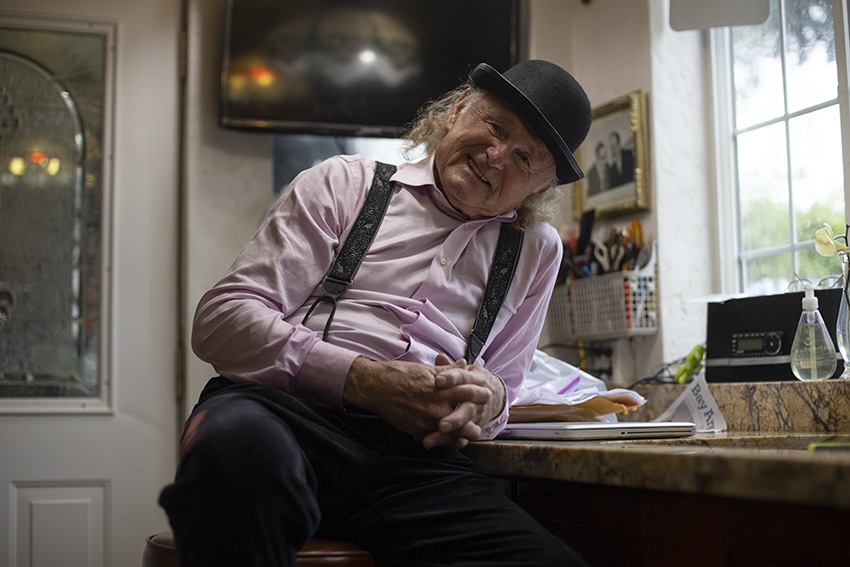 Since buying out his remaining partner in 2008, Quinlan hopes he can finish the project in time to be able to give some earnings to the family of his former business partner, Honaker, and finally retire. Honaker died in 2008.

Quinlan still works as a contractor, if only for a few hours a day, and lives frugally by buying his clothes secondhand — with the exception of underwear, socks and glasses, he emphasized — and hopes to be able to pay off debts.

“I’d like to see it through completion. I don’t have many options in life, I’ve got people I’ve got to pay back. I don’t have retirement options,” Quinlan said.

At least now he won’t have to trim the weeds every year.