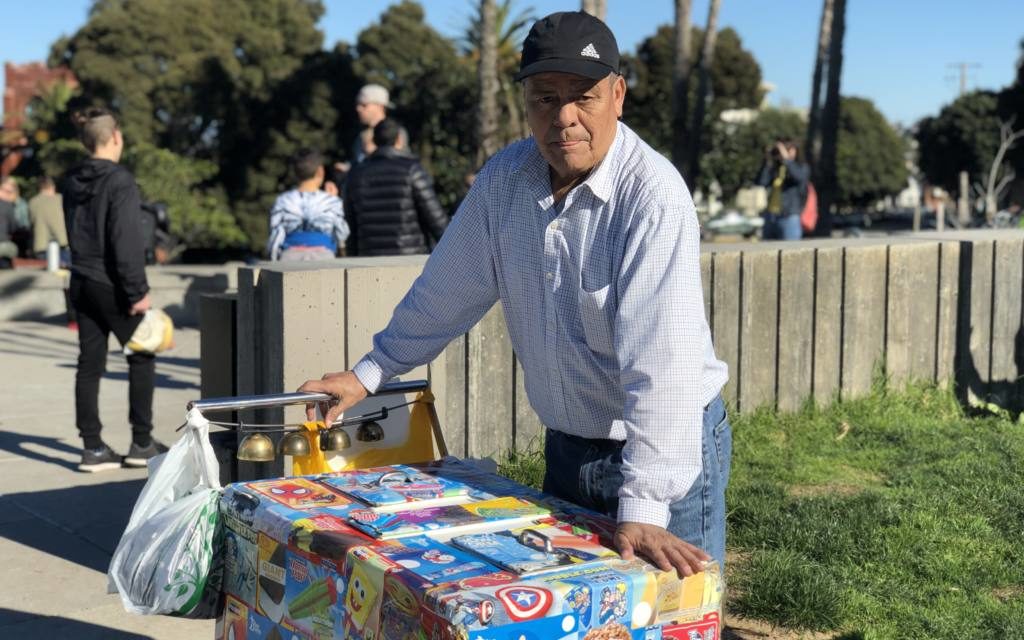 Miguel Muñiz hangs out next to the Dolores Park playground on weekends and holidays.

Fact of life and barely commanding any attention, the change of the seasons alters the life of a dozen paleteros serving the Mission District. And, to top it all off, there are the rangers.

“Those green policemen don’t let us work and keep throwing us out, but we don’t hurt anyone!!” complains 65-year-old Miguel Muñiz, unprompted.

Martin Luther King Day was his first one out there since the fires of November forced him into early hibernation. In the meantime, he covered his expenses with gigs as a gardener and food packer in Fruitvale. But this morning -sunny side up, kids running tapping his icebox with demanding gestures- life is starting to look better for the old men ringing the bells.

“We sell very little during the winter, up to 25 or 30 dollars after a whole day,” he says. On any given weekday, Muñiz can be found outside César Chavez, Moscone and John O’Connell schools, where no ranger comes close. A summer day, still distant in his memory, can get him a good $100.

A native of Mexican crime-ridden resort town of Acapulco, Muñiz spent 13 years working as a housekeeper in Texas before settling in Oakland, where he raised his only daughter. There, he waits every morning for the van that will drop him in the Mission for his 8-hour shift.

Despite the exhaustion and bodily pains, he will stick to that routine for a few more years. “Then I’ll retire at Acapulco, where I managed to build a little house,” he says. “Just so I can stop paying rent here.”