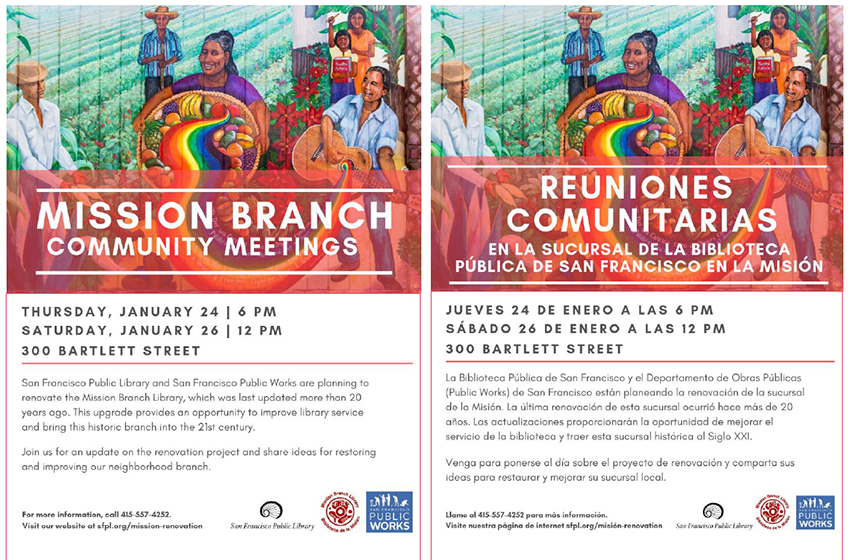 The lead architect for the San Francisco Public Library Mission branch’s $19.8 million renovation project told 20 residents gathered at the library Thursday evening that his proposals call for a first-floor expansion of the library.

Andrew Sohn, an architect from San Francisco Public Works, said the expansion would alleviate some of the congestion on the first floor.

The addition — on Bartlett and 24th Streets — would require approval from the Historic Preservation Commission. Sohn suggested that the addition could serve as a community gallery, reading lounge or event space to reflect the Mission’s culture – and as a way to energize what he presented as the community living room.

Other proposals call for restructuring the main entrance of the library to 24th and Bartlett Street, which would lead patrons into the new lobby, as well as a dedicated teen area, a few more restrooms, and for the entire library to eventually have air-conditioning. “The goals are comfort,” said Sohn. At present, the children’s room is the only space in the library with air conditioning.

The earliest the city expects to break ground on the library renovation is the summer of 2020, with a completion timeline of 18 to 24 months.

The branch would likely see a total library closure, but the city is looking for alternative options, such as an interim location to maintain as many services as is feasible, or increasing the bookmobiles in the community. The library is much beloved — and used. On any given day, nannies, mothers and other patrons line up outside, waiting for the doors to open.

The proposed design ideas follow a community survey from last year in which residents were asked what they would most like in the space. Of the 405 surveys returned, the key findings suggested a community meeting room, more restrooms, a teen area, a quiet room, and a commitment to maintaining the historic architecture (the historic stairs were lost in a previous renovation) were locals’ top priorities.

“What’s really nice is that about 69 percent of the people that filled out the survey use the branch at least once a week or more,” said Mindy Linetzky, who is San Francisco Public Library’s communications manager. “One of our goals was to really find people who use the branch, not just anybody.” 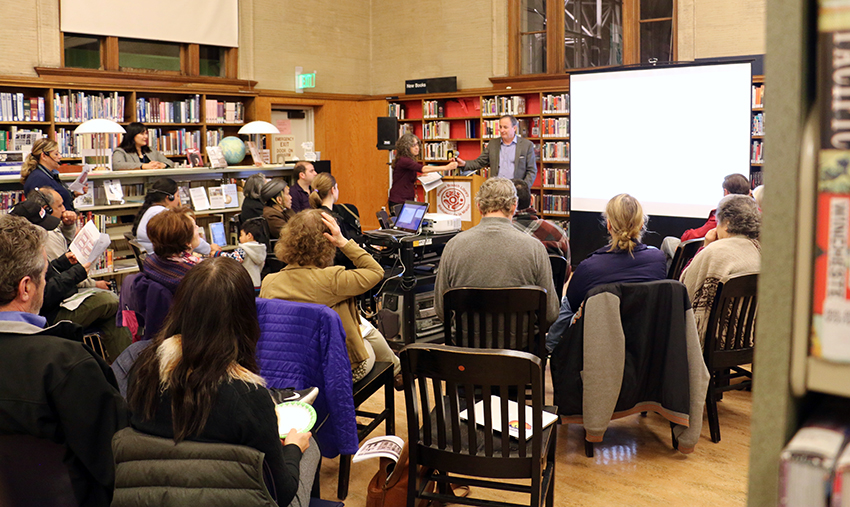 An important cornerstone of the community, patrons want the library renovation to support the diversity of the Mission District. Linetzky said they want to maintain a balance between keeping and restoring the history, and providing modern services.

Sohn said that the feasibility study from last year yielded guiding principles that will serve as the touchstone for all the projects they work on in the next few years, such as incorporating flexible and multifunctional spaces at the Mission branch for “doing and learning.”

The community living room, which could accommodate up to 100 patrons, he said, may be transformed as a lecture hall, a classroom setting, and for children’s storytime events.

In last year’s survey, patrons emphasized the importance of the children’s reading room, which Sohn called a “sacred space.” “We can’t make that less than it is,” he said.

Sohn also took a note from a community member at the meeting who expressed concern that the children’s reading room is designed too close to the entrance of the library in one of the proposed floor plan designs.

Community members said they were delighted to see the changes and improvements to the lower floor in the proposed floor plans, notably the much-anticipated restrooms and a proper lobby where patrons can seek shelter from the rain and to safely wait in the building for rides.

It’s clear that the library is a fixture in many patrons’ lives — not just for the intangible value of books and shared interest in architecture, but for the vital community services the library provides them.

While the architects acknowledged that it has been a lengthy and elaborate process, the main goal of the community meeting was to update residents on the early planning and design phase and to receive input from them.

Community members who were unable to attend yesterday’s meeting will have another opportunity to hear the presentation of ideas and provide suggestions for the Mission Branch Library renovation tomorrow, Saturday, Jan. 26 at 12 p.m.