Score 0%Score 0%
Jeremy Rourke explains how he uses the mini-ATA in his stop-motion animations.

As Valencia Street in the Mission is increasingly burnished to a shine, Artists’ Television Access — flying a black-and-white sign like a pirate flag — stands out as a rough spot in a sea of diamonds.

The cinema collective moved from SoMa to the Mission in 1986. Since then, ATA has hosted art, performance and cinema, exploring the areas where the three intersect.

Going into its fourth decade, ATA itself is the subject of a new film.

For the last year, artist Jeremy Rourke has been in residence at ATA, 992 Valencia St., documenting its living history in his distinctive stop-motion animation style. Rourke is unveiling his film, I’ll Be Around, Dec. 7 and 9 at ATA. Rourke’s “expanded cinema” performance will include him performing a live soundtrack for the film, which runs to one hour.

The film’s trailer — featuring a mini-ATA Rourke built — showcases the filmmaker’s ability to manipulate the real into the surreal. His film promises to be offbeat yet grounded, much like ATA itself.

Rourke spoke to Mission Local about animation, patience, his mini-ATA model.
(Interview has been edited for length and clarity.)

ML: What is ATA, and what does it mean to you?

JR: When I’m outside, and people ask me what ATA is, I say it’s a volunteer-run collective. And I can see it’s kind of like: “Wait, what are you talking about?” Because it seems like such a rarity here.

So yeah, it’s totally a volunteer-run collective where anything goes, and it has a lot to do with why my work looks the way it does. My first show was here, you know. I was trying to find a place to play music — along with animation — I kind of like sing along with them — and there’s not many places for such a thing to happen.

To have a space where kind-of-anything goes is hugely important, and it’s not all about a merch table in the back. And it’s just so active, it’s like a beehive — people are coming in, and going out, and using it. And so many people have performed here. It’s like in the … wood … it’s in the walls … it’s in the seats. This place — everybody knows this place — around the world.

ML: Does it take a lot of patience to do stop-motion animation?

JR: People ask me that all the time. It doesn’t feel like patience, because I love it.

When they’re hard it feels like patience. And every once in awhile, I’ll admit, it’s like, ARGH!, very frustrating. Sometimes I’ll do a sequence and see there’s like a fuzzy on it or something. Or I wasn’t even in focus, ‘cause I was just so ready to get to work. You know, and I’m like, “Oh my God. What the heck did I just do? I can’t believe I did that.”

ML: Can you show us your mini ATA?

I really just had a vision of having things breaking through and coming out the door, and coming out on the sidewalk and um, yeah, I built my little mini ATA — it’s the first model I ever made.

ML: It’s hard to describe ATA. Is it part of a certain “scene”?

JR: Working here for this last year, I’ve just seen that there’s not kind of just one scene — there’s different nights, and totally different groups of people coming in using this place, and it was set up in the very beginning. I called the founders did some phone interviews with them. It was set up that the “access” part of ATA is the main point. This is for everyone.

So I wouldn’t say there’s a specific scene. I would say that there’s not that many places you’re going to continually see 16-millimeter film projected — and performance-based cinema.

ML: What inspired you to make a documentary about ATA?

JR: It’s through the Creative Work Fund, partnering an artist with a non-profit and having it be a totally organic conjoinment — which it already was — a lot of my work was already very site-specific about this place.

ML: Can you tell us anything about I’ll Be Around?

JR: It’s gonna be an hour-long expanded-cinema performance, and it’s also gonna be a standalone video that ATA can have and use to document its history forever.

ML: Is it accurate to say it’s gonna be educational and trippy? 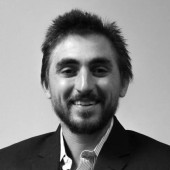