Andrea Salles is an independent photographer working with the film festival’s PR agency, Larsen Associates.  Salles sent in these photos from the docs shown at the Roxie over the weekend. Author Josh Hattam about to see THE WORK. Photo by Andrea Salles THE WORK – Mother and son (Blue and Jairus McLeary). Photo by Andrea Salles THE WORK – Jairus McLeary & attendee having a good laugh. Photo by Andrea Salles

Set entirely inside Folsom Prison, THE WORK follows 3 men during 4 days of intensive group therapy with convicts, revealing an intimate and powerful portrait of authentic human transformation that transcends what we think of as rehabilitation.

The impact of mass incarceration on a generation of youth is explored through an annual Mother’s Day charity bus journey that take children from across California to visit their mothers in prison.

EVLIN is an 8-year-old girl who escaped with her family from their village in Kobane, Syria in September 2014, fleeing the terror of the militant Islamic State (ISIS). She now lives in an overcrowded refugee camp on the edge of the Turkish-Syrian border, so close that you could still hear the explosions. Evlin joins the adults who pray and sing on the border, watching the smoke rise above their beloved Kobane. 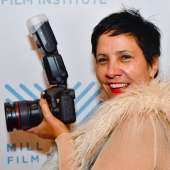