Score 0%Score 0%
Golden Gate Urgent Care is one of three new clinics that open shop on Valencia in the last year. Photo by Brian Rinker.

People mistake the health clinic for a furniture store almost daily, said Jenny Montoya, the receptionist at One Medical where the façade is lined with large windows. Inside, patients sit on mid-century sofas and light bulbs and woven baskets dangle from the ceiling. Behind the reception desk the Bay Area artist Erik Otto has painted a mural.

Her favorite story was when a women came into the clinic and asked her how much one of the mid-century sofas cost.

“I told her we were a doctor’s office. She was flabbergasted,” said Montoya.

Since February, when One Medical moved into the space on Valencia where the now famous Slanted Door restaurant got its start, two other clinics have followed. Golden Gate Urgent Care opened up in a former yoga studio at 1085 Valencia near 22nd Street and Sutter Health took over the 7,100 square-feet ground floor of the new V20 building at 899 Valencia St. on the corner of 20th Street.

It’s no surprise that Sutter’s clinic fills the commercial space under million dollar condos. The emerging health clinics on Valencia offers another indication of the Mission District’s ongoing economic shift toward more well-to-do residents. The trend also acknowledges what most in the city have already known for years: Health care is a hot investment.

The operators of all three clinics argue that they are addressing the area’s growing healthcare needs, each one employing a different strategy to capture a slice of the Mission market – one that is wealthier and more insured than ever before. For years, the Mission has needed more primary care doctors and non emergency care, said Doctor Adams Dudley, the director of UCSF’s Center for health care Value at the Philip R. Lee Institute for Health Policy Studies.

Now, the area has the money and insured clients to pay for them – two factors that are most likely fueling Valencia’s health care movement, said Dudley.

“These are businesses,” Dudley said. “They go in not just where people are, but where people who have insurance are, or who can afford to pay.”

A $3 trillion a year industry translates into about $10,000 per person, said Dudley.

The Affordable Care Act increased insurance coverage nationwide, and in turn has placed primary care doctors in high demand. This means new healthcare ventures are competing for the growing number of insured patients, shifting parts of the healthcare industry to focus on convenience, quality and affordability.

So, in a sense, the Affordable Care Act has made health care a less risky investment, said Dudley. And on Valencia street, the clinics embody different investment models – private equity, independent ownership and the non profit.

One Medical, backed by private equity, defies the traditional doctor’s office model. It boasts premium services at a low cost and promises stylish offices and on time appointments. Each of its four doctors that work out of the Valencia office is capped at 16 patients a day, and because they’ve done away with medical assistants, the patient spends more time with a doctor.

The company also provides 24-hour virtual care where patients can get prescriptions filled. They take most insurances, but not Medi-Cal, and charge an annual $149 membership fee.

One Medical began in 2007 by Tom Lee and marketed itself as a hip start-up medical practice in San Francisco, enticing enough investors in 2015 to pour $181.5 million into their business. It now has 50 offices in metropolitan centers across the country, 16 of which are in San Francisco.

On the other end of the spectrum is a local (as in Bay Area) effort started by Mary Jane Connell and her husband Kurt Kunzel, two longtime emergency room doctors who founded Golden Gate Urgent Care in 2012.

Connell and Kunzel mortgaged their Napa Valley home to start Golden Gate and now have 4 locations in San Francisco and one in Mill Valley.

They started their urgent care business to provide medical care alternatives to the emergency room.

“We worked and taught emergency medicine for many many years and we could see more and more people coming to the ER because there was no where else to go. And then they would get these enormous bills,” said Connell adding that she and her husband wanted to be part of a new paradigm in health care.

Golden Gate isn’t a primary care facility for managing chronic problems, it provides emergent and urgent medical care to those with or without insurance at a price more affordable than an emergency room visit– from a sore throat to a broken limb. She estimates that the cost of an urgent care visit is less than 10 percent of what it would be in an emergency room.

For years, Connell had eyed a spot on Valencia with no luck.

“No one would rent to us. They all wanted retail,” she said.

Then when the yoga studio decided to move out the owner called to see if Connell was interested. It was a little costly to get the building up to code and meet historical regulations and planning department records show they spent $230,000 in renovations. “It cost a fortune,” Connell said.

But, it is a good bet. The urgent care industry has been trending for nearly a decade now and is expected to grow even more – from $16.5 billion in 2015 to $19 billion in annual revenue by 2020, according to IBIS World.

The same month Golden Gate Urgent Care opened so did the massive Sutter Health, a not-for-profit, state-wide health care provider. Sutter’s spot on Valencia is a primary care facility with 14 exam rooms and they have plans to offer urgent care and to bring in specialists. Currently Sutter sees 30 to 40 patients a day.

Elma Mujic, who works reception, came over from the California Pacific Medical Center’s Davies Campus after the physician group she worked for was acquired by Sutter.

Mujic said the new clinic is “super different.” For one, there are windows, and it is huge.

“Our office is so large we needed to get walkie talkies to talk with each other,” said Mujic, who commutes all the way from Citrus Heights.

Not everyone in the neighborhood was as excited as Mujic was about the Sutter Health clinic.

Jefferson McCarley, the owner of Mission Bicycle and a member of the Valencia Corridor Merchants Association, said the association opposed all the clinics.

“If I were a medical group I would like to be on Valencia. I can understand,” said McCarley. “But as neighbor, a resident, as a worker who lives in the neighborhood, I don’t appreciate them opening up on Valencia. I think it does impact the character.”

“Sure, it’s practical,” said McCarley. Health care helps people stay healthy. “But that practical thing can go many other spots. It doesn’t need to be on Valencia.”

McCarley remains most annoyed with Sutter.

The space was suppose to have three retail units, but the city approved Sutter’s expansion and as a concession, the clinic agreed to a micro-retail space out front, which is run by the local florist, Mission de Flores.

“So no one really got what they wanted,” said McCarley.

Mujic said locals sometimes come inside and complain, asking why there needs to be another health clinic on Valencia.

“What else do you want to open,” she responds. “another restaurant?”

Opening up on Valencia is surely convenient for patients, who can go shopping, get a haircut at trendy barber shop or grab a burrito. And, Valencia is also located near two BART stations and not far from a number of booming tech companies.

Dan Stahl, 33, doesn’t have insurance and relies on Golden Gate Urgent Care and others for affordable medical care.

“The big thing for me has been to find good medical solutions without having insurance,” said Stahl, who works in the service industry and lives down by 15th and Alabama streets.

He needed some antibiotics for a minor infection. He booked an appointment online, and in 15 minutes, after a short bike ride, he was seeing a doctor at Golden Gate Urgent Care. After his quick appointment, Stahl walked his bike along Valencia to Needles and Pens for some shopping. One Medical is one of three new clinics that open shop on Valencia in the last year. Photo by Brian Rinker. 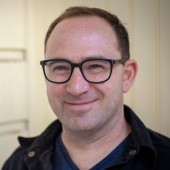