Deport Trump. That’s the statement that stops pedestrians in front of Casa Bonampak at 1051 Valencia St. But it’s not just the sign that catches the eye. All day long, people are stopping outside the Mexican art and craft store to gawk at Trump piñatas.

With their tiny hands and oversized empty heads, the Trump piñatas are a perfect likeness of the Republican candidate who says he’ll build a wall between the United States and Mexico. The figures are works of art. Their crafted immobile faces seem dynamic, as if they were frozen right in the act of saying something derogatory about Mexicans.

They’re terrific piñatas, believe me. In fact, sales have soared so steadily that demand for Trump piñatas often outpaces the supply.

“We didn’t think Trump was going to be a factor,” said Nancy Chárraga, owner of Casa Bonampak. “Who would have thought that?”

Chárraga said that many piñata artisans were hesitant to make Trump piñatas, thinking that the offensive statements toward Mexicans would swiftly disqualify the candidate. Since Trump became the nominee, the artisans have been playing catch-up. With the election in full swing, the demand is only increasing.

“Trump piñatas got us through the first quarter,” said Chárraga.

And when it comes to piñatas, Mexico is sending us their best.

Chárraga imports all her Trump piñatas from traditional artisans in Mexico and they run $60 to $75 depending on the size.

For those interested in smashing Trump on a budget, there’s a popular option at Discount City on Mission. The owner, Mohammad Shafi, said he was the first person in San Francisco to sell Trump piñatas.

The piñatas at Shafi’s store – manic figures with wild yellow hair and wide mouths – don’t look much like Trump, but the price is right for many people. Shafi’s piñatas cost about $14. He said that he’s sold about 6,000 of them since he first stocked them last year. When asked if the piñatas actually resemble Trump, Shafi said, “Sure, he’s got a big mouth.”

Piñatas like Shafi’s are on the low end in terms of quality. The best Trump piñatas are made by artisans like Romeo Gilberto Osorio. A sculptor from El Salvador, Osorio crafts custom-made piñatas at about $80 apiece and sells them at his store at 4268 Mission St. in the Excelsior District. He makes two a week, because he knows they will sell immediately.

Osorio uses a traditional Salvadoran technique to craft his Trump piñatas, first making a wire frame and layering papier-mâché and crate paper. It’s a three day process that results in a much tougher piñata. Unlike the candidate that the piñata mimics, Osorio’s Trump is not thin-skinned.

For Osorio, producing Trump piñatas is not necessarily a political statement.

“I’ll make anything that will sell,” laughed Osorio.

But for some customers at Casa Bonampak, making a political statement is exactly why they want a Trump piñata. Bob Dearth was delighted to see the Trump piñatas. He plans to buy one to put in his window, and has no plans on breaking it open.

“It seems like a great way to make a statement about immigration,” said Dearth.

Chárraga is careful to point out that the piñata tradition is not just a political protest – even well-liked figures can be made into piñatas – but there is definitely an element of protest in Chárraga’s display. The Trump piñatas themselves are surrounded by large paper vagina sculptures. Poetic justice perhaps, for the misogynist candidate. 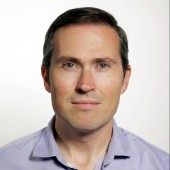