Score 0%Score 0%
Jonatan Martinez, left, and Veronica Gomez, right, walked from San Francisco to Washington DC as part of the Campaign for an American Dream. Their journey was captured in the new documentary “American Dreamers”, which had a pre-screening Saturday night at Mission High School. Photo by Jeremy Mazur.

On March 9th, 2012, a group of undocumented youth and a few allies took a walk across the Golden Gate Bridge.

And then, they just kept walking.

They continued past Oakland, through Utah, Kansas, and Kentucky, until, eight grueling months later, they arrived in Washington DC, carrying little more than a Native American spirit stick they’d received in the Mission District’s Secret Garden.

On a recent Saturday night, a few of the walkers (and the spirit stick) reunited at the Mission High School auditorium for a pre-screening of American Dreamers. The film tracks the cohort on their Campaign for an American Dream as they endure sit-in hunger strikes, dwindling bank accounts, and chronically sore calves in a plea to urge the Obama Administration to halt mass deportations and grant legal status for undocumented youth.

“Darn right they’re dreamers,”  said San Francisco Superintendent Richard Carranza in his introduction, evoking the phrase often used to describe migrants who arrive in the United States as children. “This film is about young people who’ve stopped apologizing for who they are.”

After the screening, Saray Deiseil and her co-director Jenniffer Castillo explained that they’d heard about the walk the day it started. “Can we follow you?” she remembers asking the group. “We’ll take care of ourselves.”

As the mechanical and emotional breakdowns on the trip piled up – at one point, the group ditches their RV in favor of KMART shopping carts – Deiseil and Castillo doubled as friends and caretakers.

“‘Guys, this is a sketchy area,’” Deiseil remembers telling the group as they trudged shopping carts bearing their belongings up and down the hills of the Appalachian Mountains. “There’s this bushy area on Google Maps – sleep there.”

In the spirit of reality TV, the presence of the cameras added to the intensity of the experience for the walkers, many of whom were risking arrest and the threat of deportation along the journey.

“It was awkward, just having a big black hole staring at you all of the time,” said Raymi Gutierrez, an American citizen who joined the walk after half of her family received deportation letters.  “I didn’t think it would be so challenging.” The film tracks Gutierrez as she triumphs over the exhaustion and self-doubt, even as other walkers dropped off along the way to pursue other projects. Walker Jonatan Martinez, who spent four weeks in a detention center during his senior year of college, egged the group on: “We’ve been through the worst, for crying out loud. We’re undocumented, for crying out loud!”

The walkers agreed that their advocacy hadn’t ended when Obama passed the Deferred Action for Childhood Arrivals (DACA), which granted a two year reprieve to some Dreamers.

“I’m going to apply when we can all get relief – not just a band-aid,” said Nico Gonzales, an Oakland activist who participated in the first half of the walk. “If we don’t take action, politicians won’t do anything.”

Co-directors Deiseil and Castillo are working on finding a distributor to bring American Dreamers to festivals, theaters, and more high schools, and expect the film to debut in the next month. The pair quit jobs in television to work on the project, which quickly became personal.

“My mom came to this country pregnant with my brother,” said Deiseil. “He got a full ride scholarship to Stanford, and if he’d born a few years earlier, he might not have had that. I never thought about it until meeting [the Dreamers].” 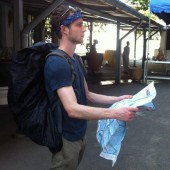