It May Be Art, But Does It Go With Coffee? At Ritual Coffee on Valencia, photographs of people at Burning Man, dressed in outfits that range from tree to cheetah to cowgirl, line the walls. The exhibit — photography by Julian Cash, a longtime documenter of Burning Man culture — would seem unremarkable if it weren’t for the minor neighborhood controversy surrounding the photos exhibited before it.

On June 27, a series of 20 x 20 photographs by the artist Varese Layzer was taken down from the shop’s walls after just six days. In a letter to Layzer, Ritual’s owner, Eileen Hassi, explained why:

You’re going to think I’m the bad guy in this situation, but allow me to explain my position: Your art is serious work. It’s too serious for the cafe. It’s dealing with real stuff, real emotions, loss, attachment, family, death. It belongs in a real gallery, where people are in a space to contemplate these things. The art that belongs in a cafe is fluffier stuff, stuff that doesn’t make people think about the tough questions in life: pictures of telephone poles, birds sitting on the wires, tapestries of heavy metal lyrics. Whimsical stuff.

In the letter, Hassi went on to offer to introduce Layzer to some gallery owners.

Your artist’s statement is safe, just tucked away. It was just too intense for people looking for escapism with their coffee. I have another show ready to go, so please let me know when you’ll be taking the show down.

In her artist’s statement, Layzer explained that the photographs — of dingy, well-worn rooms, sparsely furnished — were taken while clearing out her parents’ rent-controlled apartment on the Upper West Side after her mother’s death. On her Flickr page, she posted Hassi’s letter in full, as well as a statement disagreeing with Hassi’s reading of her art.

I offered to remove the statement —vareservoir.com/making-room-up-now–/statement — which was the only thing that made Hassi write that the show was about death. The actual pictures can be interpreted in many ways. I do not think the show is about death.

Hassi told Mission Loc@l that she is working on a longer letter of explanation and would not comment at this point. Layzer could not be reached for comment. But inside the cafe, reactions to the art, both current and previous, were muted.

“It seems relevant to this week in San Francisco,” said Julia Neunan of the current art, referring to the colorful costumes of last weekend’s Gay Pride parade.

Another customer, Paul Kim, said that he actually preferred the previous art to what is showing now. He’s not a fan of the partial nudity on display in Cash’s photos, and found their subject matter strange for a coffee shop. But in their favor, he said, they’re “edgy” and add color to the space.

“I think the artwork is interesting,” said Cassandra Bauer of the current show. She mentioned that she found some of Cash’s photography “painful,” but also expressed the belief that “art is a form of freedom of expression.”

But is it appropriate for the walls of a coffee shop?

“It is up to the owner to decide the type of art that they want on the walls of their business,” said Bauer. “The owner is creating an atmosphere with the art that they choose to show.”

UPDATE: Julian Cash gives his own perspective on the controversy (and on art in general) here. 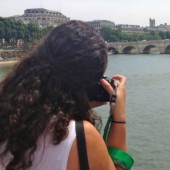