Pat Frank’s third-grade class hurriedly files in to Room 206. As she takes attendance, students put their backpacks away and find a pink booklet labeled “Spelling Pretests.”

“Presente,” a girl says as she sits at her desk to organize her things.

The day begins with language arts. Frank begins to review the latest vocabulary the class has learned. The children’s heads are buried in their booklets, waiting for the first word to be called out so they can write it down.

“Twinkle, twinkle little…” she pauses for a response.

A boy with glasses and crew-cut hair is squirming. He can’t wait to answer the next question.

“Give me a word that means difficult,” Frank challenges.

The boy’s hand shoots up. “Ooohh!”

Frank points her sharpened pencil to him to answer.

“Hard,” he says. She nods. His eagerness persists as Frank eventually moves on to new vocabulary words, like rodeo and exhibition.

The students are instructed to turn in their spelling notebooks. Frank remembers to point out new additions to the classroom decor. The walls are lined with colorful posters and signs in both English and Spanish. She points to a map of the world posted on a wall. Pins are pushed into the cities and countries the children are from. A few dig into California, but most are pinned on parts of Mexico and South America.

The children scurry over to the rectangular map. Color pictures of the children and their families have been added around the borders.

“I can’t see,” complains one student from behind the crowd.

“Ohhhh,” the class says in unison.

The children carefully walk over to a carpeted area of the room. Squared pillows cover the floor for students to sit on.

“OK, muchachos,” Frank begins. She introduces the new book they will begin reading: “Anthony Reynoso: Born to Rope.” The new vocabulary words that were presented earlier are brought up again — the book uses them throughout.

Frank holds up a laminated card with the vocabulary word “rodeo” printed on it. A graphic of a rodeo accompanies the word. “Has anyone ever been to a rodeo?” she asks.

One boy leaning up against some cubbies in back slowly raises his hand. “I’ve been to a rodeo,” he says. Frank asks him to describe his rodeo experience, but he’s too quiet to understand even from a few feet away.

Frank moves on to the word performers. “Do you know any famous performers?” she asks.

A girl sitting Indian-style at the very front uncrosses her legs quickly and raises her hand. “Celia Cruz,” she says with a smile.

“Yes, Celia Cruz,” Frank says. Another student shouts out Michael Jackson. “Yes, Michael Jackson is a famous performer, but I was thinking of Latino performers,” Frank clarifies. An “oh” moment fills the room. “How about Shakira?” Frank hints. While some smile, three boys sitting in the middle of the group giggle at the thought of Shakira.

The last word is exhibition. She asks the class if they remember where they went last week.

“The Asian Art Museum,” they shout. One boy in the front corner whispers, “…it was beautiful.”

That was an exhibition, Frank explains. To wrap up their vocabulary lesson for the day, the students are asked to return to their seats for one last activity.

They work in pairs to come up with as many words as possible (nouns) to describe last week’s field trip. The words will be added to a word bank on a giant Post-It note.

Groups are careful, and whisper. Their answers must be kept secret from others so that they end up with the most words.

“Oh, a dress!” a student in a navy blue zip-up hoodie loudly whispers. His partner shakes his head no because he didn’t see a dress. “Yes,” he says. “Well, I didn’t see one,” his partner reaffirms. “Just put it,” he insists.

The anxious student in the back corner of the classroom is still squirming, only now he is at the edge of his seat. A girl with a French braid in her hair is his partner. It’s almost time to finish, and he leans in to make sure they have written down the same words.

Time. Frank goes around to each group and asks how many words they came up with. The largest number was 48. She tells students to begin naming words to add to the word bank. The anxious one inevitably raises his hand.

“Jar,” he says proudly. Frank adds it to the Post-It.

The next person says “jade.” Frank is impressed that they remembered the beautiful jade jewelry they saw at the exhibit. The anxious boy “awws” in defeat. He didn’t think of that word for his list. 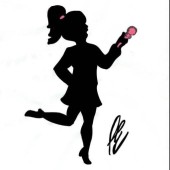