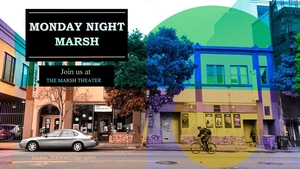 Tickets: $13 – $35 General Seating sliding scale
Tickets may be purchased online or at the door (credit card only)
Mondays at 7pm | San Francisco Mainstage

Please read ourHealth, Safety and COVID-19 Information
Our commitment to our patrons

Proof of vaccination along with valid ID
Face Coverings are required

“BIRD” by Kylie Vincent
SHOW DESCRIPTION: Part stand-up, part memoir, part fever dream. Coming off their NYC run, creator, Kylie Vincent (Adult Swim) & director, Barbara Pitts McAdams (The Laramie Project), bring BIRD to DC.
A young woman sits alone at a bar, and with Gen Z dark humor, unburdens herself to an unseen bartender. When our narrator, self-identified as Bird, attempts to grapple with her past trauma, she dissociates into metaphor—sometimes to humorous effect, sometimes with heartbreaking imagery and honesty—transforming her family members into animals.

“My Chinglish Way” by Catherine Zhao
SHOW DESCRIPTION: In this musical comedy I’m going to talk about how I survived my first 8 years as an International student and then immigrant from China to the east coast and then to California and how I became a standup comedian and perform all over California.

“He Wants to Run” by David Kleinberg
SHOW DESCRIPTION: “He Wants to Run” is about a guy who hates running and dogs, and how I ended up running with my neighbor’s dog Butler for 13 years in Cloverdale, Ca., and what Butler taught me about living and dying. For “He Wants to Run” previous performances of the entire piece and reviews: www.hewantstorun.com

“Where I Come From” by Jerry Metzker
SHOW DESCRIPTION: “Where I Come From” shares the history of Irish immigration through the story of one poor, single immigrant, fleeing a terrible life with the hope of building a better one. He has heard that the United States is a land of hope and promise. His escape from starvation during the Irish famine, his harrowing journey across the North Atlantic, his landing in New York, his struggles and hopes to build a life in the new land and at the same time retain his cherished Irishness comprise this story.

“Fireflies of Comedy” by Sally Love Saunders
SHOW DESCRIPTION: Sally’s reactions to details of life can be very funny. She is often called the funny lady in her building, and enjoys making people laugh.

“Racially Ambiguous” by Carlos Garbira
SHOW DESCRIPTION: This show is a humorous and reflective commentary on not being able to fit in as an immigrant in either the American culture or the Hispanic culture while still looking to grow my family, raise daughters, and become a part of my community. Racially ambiguous is a term used in Los Angeles by casting directors when actors or models look like they can be from different ethnicities, and people can’t really pinpoint which one.

“Alien from an Alternate Earth (Selections)” by E.G. Phillips
SHOW DESCRIPTION: Singer-songwriter E.G. Phillips (aka Ducks With Pants) will perform selections from his upcoming album solo troubadour-style, including the following songs:
– The Octopus Song (a ballad contemplating the nature of consciousness; octopuses)
– Ode to the Wildhorse Cafe (a little bit magic in the middle of nowhere)
– Brave Heart, Luna! (some encouragement for our friend, the moon)
– Till We Have Faces Again (a retcon of a re-telling of a myth)

“The Answer” by Kati Knox
SHOW DESCRIPTION: This piece is about two days in a Senior Care Home. One day takes place at a staff meeting, where the staff is being told that the Pandemic and the County Shelter in Place Order is coming and that we will be quarantined in place. Our whole world will be changing. The 2nd day takes place 8 months later, we’ve been sheltering in place and COVID Free for 253 days. We are waiting for the answer to the question; is the COVID Virus in the care community?

“My View of Love” by Bill C. Jones
SHOW DESCRIPTION: This is the story of a young man who had the wrong view of women, and is so thankful that he met the women who would change that view.

“Where Do We Go From Here” by Barbara Brady
SHOW DESCRIPTION: After putting her own life on hold to take care of her eccentric elderly father, it’s now time to help him on his final journey. Dad’s life has been fueled by faith in God and a passion for science. Which is most important now? It’s anybody’s guess. This is an excerpt from Barbara Brady’s solo show “Father, Daughter and Holy Ghost.”

April 11 & 25
“Thick as Thieves” by Susan Jackson & Diana Brown
SHOW DESCRIPTION: Jenny has traveled to the Big Bear Diner outside The Great Smoky Mountain National Park to find her ex’s new girlfriend. Ready for a fight, she encounters a young woman who seems to fit the description and appears openly antagonistic. Is she “Miss Dessert” and if so, what will Jenny do? Fast forward a few months and the consequences of Jenny’s actions have ended her up in a Mental Institution: for stealing?

“I Will Survive” by Pearl Ong
SHOW DESCRIPTION: It’s 1978 and it seems every homosexual in the world is in San Francisco or trying to get here. I’m already here, and the pull is undeniable. If you’re gay and you don’t drink and dance, don’t even bother to come out.

“If Anybody Else Told Me That Story…” by Bennet Caffee
SHOW DESCRIPTION: Bennet is in a jail cell in Fort Collins, Colorado but he’s not concerned because “It’s all part of the plan”. Is he having a spiritual awakening or something else?

“3D Graffiti” by JP Frary
SHOW DESCRIPTION: I have been doing things with my hands for money for 30 years. Starting with plumbing, then remodeling houses, to making cabinets, and designing and building fine furniture. And this work has been rewarding, but recently I’ve started making art that I hang up out in the world. It started with metal leaves that matched the leaves of a nearby tree. Then I made birds out of triangles of wood left over from making stair stringers. And then people out of the triangles. And the triangles have taken me down a path of geometrics. Giant concentric circles fascinate me. And now it’s fake symbols taken from alchemy and Cuneiform.
The rub here, is that I don’t know where this is going at all…but I am placing these pieces of art out in the world on abandoned buildings and telephone poles and I get to anonymously watch people’s reaction to them. And I also get to see them stolen. I have seen the metal leaves disappear and then reappear on peoples gates and front doors.
The story I want to tell is one of artistic discovery, but without an ending. I am transitioning from being a maker of utilitarian things to a maker of things that have only artistic value. And that is interesting.

“Indonesia?!” by Alyssa Girsang
SHOW DESCRIPTION: This piece is about my trips to Indonesia which I first took with my German mom in 1980 when I was nine, then again when I was a teenager, and finally when I was an adult in 1992.

“How I Became An Environmentalist: A Love Letter to Sheehy Creek” by Yvonne Baginski
SHOW DESCRIPTION: For 20 years, I have walked a narrow asphalt path tucked next to middlin’ little creek in the midst of the Napa County Industrial Park. It’s called Sheehy Creek, but I didn’t know that until this year. Surrounded by open fields, filled with rabbits providing entertainment for my ever-running, energetic dogs, I could walk alone and look north to a vista view of the beautiful Napa Valley. There’d be low flying jets flying into the airport which was just west of my walk, and mostly no one ever crossed my path, or even knew of this nature hideaway. Sometimes I’d come across a pheasant, an egret, heron…or even a wild turkey. For several years, I’d come across a couple of wizened coyotes who’d watch from afar, and eventually came in close enough for me to see that were male, bigger than I believed, and not as afraid of me as I hoped.
As idyllic as this sounds, things started changing a few years ago. Almost overnight, as winery warehouses, storage unit centers, gas stations, a 7-11 store and office buildings sprouted up. These acres of wetlands abutting a river delta, was, pre-destined for destruction by a 1995 general plan voted in by a Board of Supervisors long now retired or dead The march toward its inevitable fate of a paved parking lot was begun and gaining strength. . .
Last month, the only birds I saw out there were two vultures sitting on an office building roof. They watched me closely as I walked by. I stared back at them. And, then I looked across the creek as yet another cyclone fence was being raised to begin the grading of the field for one more winery warehouse.
Enough. This is my story of how a young woman from Detroit, Michigan became an old woman rallying for the life of a small, inconsequential creek in Napa, Ca.