The Marsh: Brian Copeland – Grandma and Me 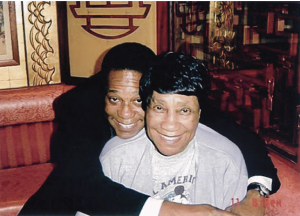 Please read our
Health, Safety and COVID-19 Information
Our commitment to our patrons

If raising one child alone is an experience, raising five is an odyssey.

In 1979, Brian’s mother died suddenly, leaving behind 5 children for his 57-year-old grandmother to raise alone. 22 years later, Brian finds himself in the same predicament when the end of a marriage leaves him alone with his three kids. Through laughter and tears, he compares and contrasts trials of single parenting in the 1970s and the dawn of the 21st century as he tries to answer the question…What does it truly mean to be a father?
About the Performer & Creative Team

Brian Copeland (performer/writer) has been in show business since he first stepped on the comedy stage at the tender age of 18. Soon he was headlining clubs and concerts across the country and opening for such artists as Smokey Robinson, The Temptations, Ringo Starr, and the Queen of soul Aretha Franklin, in venues from The Universal Amphitheater to Constitution Hall in Washington DC. Soon, Copeland branched off into television, appearing on comedy programs on NBC, A&E and MTV. He spent five years as co-host of San Francisco FOX affiliate KTVU breakfast program Mornings on 2 and two years hosting San Francisco ABC affiliate KGO’s Emmy Award winning afternoon talker 7Live.

It’s unique mix of talk and entertainment soon made it the most listened to program in its time slot. Copeland branched out into theater in 2004 with his first solo play, NOT A GENUINE BLACK MAN. This critically acclaimed exploration of race and identity created an audience pleasing blend of laughter, tears and sociology that led to the show becoming the longest running solo play in San Francisco theatrical history. Successful runs in Los Angeles and Off Broadway and a bestselling book adaptation followed. GENUINE has been performed in over 30 cities across America. The play is currently in development with Rob Reiner’s Castlerock Entertainment for television.

Copeland’s other theatrical work includes THE WAITING PERIOD, a solo play about his lifelong struggle with depression and the Christmas play THE JEWELRY BOX, THE SCION, and THE GREAT AMERICAN SH*T SHOW with Charlie Varon.

He has also appeared in the films THE BUCKET LIST and the Marvel’s VENOM: LET THERE BE CARNAGE.

David Ford (director) has been collaborating on new and unusual theater for three decades and has been associated with The Marsh for most of that time. The San Francisco press has variously called him the solo performer maven, the monologue maestro, the dean of solo performance, and the solo performers’ best friend; a week rarely goes by when residents of the Bay Area can not enjoy one of his productions. Recent work includes Echo Brown’s long-running Black Girls Are Not For Hipsters, Charlie Varon’s extraordinary collaboration with cellist Joan Jeanrenaud Second Time Around (the latest in Charlie and David’s twenty-five year partnership), Geoff Hoyle’s Lear’s Shadow and Geezer, all of Brian Copeland’s solo shows including the longest running solo show in the Bay Area, Not A Genuine Black Man. Other work of note includes, with storyteller-holy-man Ron Jones and Michael Rice, a mentally disabled performer, Say Ray. He also worked with Bill Talen on the original creation of Reverend Billy, the Obie award-winning theater/political action piece.