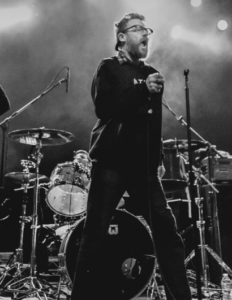 Slim’s Presents The Murder City Devils (Sunday) Corey J Brewer, Toyota Sunday Jul 28, 2019 Doors @ 7:00pm / Show @ 8:00pm Buy Tickets $25 advance / door #garage#MCD#Punk#Rock Slim’s 333 11th Street San Francisco CA 94103 The Murder City Devils are a Seattle-based punk band who like their music fierce, raw, and powerful, with a garage rock edge in the melodies and a muscular approach that recalls old-school punk favorites the Misfits and the Dead Boys, but with a dark edge that shakes off any accusations of hipster nostalgia-mongering. The Murder City Devils were formed in 1996 by vocalist Spencer Moody, guitarist Dann Gallucci, and bassist Derek Fudesco; all three had previously been members of Area 51, and when they decided to form a new band, they turned to their friend Joshua Plague (singer with Mukilteo Fairies and Behead the Prophet) for a name. Plague had dreamed up the handle of the Murder City Devils for a group in Olympia, WA with more potential than ambition, and when that band fizzled out, the new combo borrowed it with their permission. Teaming with Nate Manny on guitar and Coady Willis on drums, the Murder City Devils made their recorded debut with a three-song 7″ on Empty Records in 1997; later the same year, the Sub Pop-affiliated indie label Die Young Stay Pretty Records issued the band’s self-titled debut album. The second Murder City Devils album, titled Empty Bottles, Broken Hearts, appeared in 1998, and the band was moved up to the official Sub Pop roster for the release. Gallucci and Fudesco had both added keyboard parts during the recording of the album, and when the band set out on tour in support, they added a full-time keyboard player to the lineup, Leslie Hardy. (The band also cited their roadie Gabe as a full member of the group on their record sleeves.) Extensive touring followed, though the Devils found the time to drop 7″ singles on Die Young Stay Pretty and Hopscotch before the year was out. The Murder City Devils offered a glimpse into their diverse influences on their third full-length LP, 2000’s In Name and Blood, which in addition to 11 new originals included covers of tunes by Neil Diamond (“I’ll Come Running”) and the Misfits (“Hybrid Moments”). In 2001, the band released a six-song EP, Thelema, which found them exploring more ambitious musical territory with more measured tempos, a bit of added production polish, and an acoustic-based Christmas number, “364 Days.” The Devils set out on a U.S. tour after Thelema’s release, but when they came back to Seattle for a hometown show at Halloween 2001, they announced it would be their final performance; the concert was recorded and videotaped for posterity, and a live CD from the show, R.I.P., came out in 2003. Fudesco and Gallucci went on to form the short-lived combo Death Wish Kids, while Gallucci became a member of Modest Mouse and Fudesco joined Pretty Girls Make Graves. In 2006, the Murder City Devils reunited to play a set at the local Seattle music festival the Capitol Hill Block Party; the show was a success and since then, the group has played occasional one-off shows and gone on a short 2009 tour of the West Coast, with the band announcing that they’ve begun work on new material.
+ Google Calendar+ iCal Export