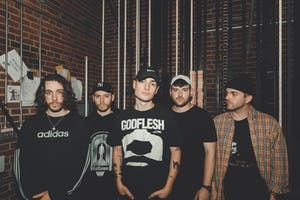 On sale: Wednesday, 8/21 @ 10am Door 7/ Show 8 Hailing from the seaside resort of Blackpool in the North West of England, Boston Manor are a five-piece pop/rock outfit known for their pop-laden vocal harmonies and bright, overdriven guitar work akin to the style of household pop-punk acts such as blink-182 and Bowling for Soup . Formed in 2013, the band quickly gained recognition for their D.I.Y. approach to recording, touring, promoting, and making a name for themselves on the local and national gig circuit. They put out several releases in the following years, including the independently released Here/Now EP in 2013 and a split 7” single with Manchester-based hardcore act Throwing Stuff later that year. They put out their second EP, Driftwood, through Failure by Design Records in 2014. They went on to sign with California-based punk label Pure Noise Records in 2015 and put out the Saudade EP later that year before getting to work on their debut full-length effort. The album, Be Nothing, was released through Pure Noise during the fall of 2016. Following the 2017 stand-alone single, “Drowned in Gold,” Boston Manor returned in 2018 with their sophomore LP, Welcome to the Neighbourhood.
+ Google Calendar+ iCal Export