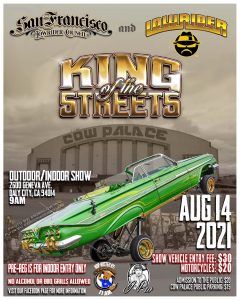 The historic San Francisco Lowrider Council slates a great summer day in San Francisco to celebrate culture, community and history as it celebrates “Kings of the Streets” 40th Anniversary at the Cow Palace, 2600 Geneva Ave. in Daly City on Saturday, August 14 from 9 a.m. to 4 p.m. The event starts with a colorful Lowrider Car Show & Hopping Contest and ends in the historic Mission District with cruising in full car regalia on Mission Street from 4 p.m. – 8 p.m.

“Kings of the Streets” is the backdrop for the core Lowrider Car Show & Hopping Contest along with pandemic defying enjoyment. The public is invited to enjoy the family friendly no alcohol allowed daylong indoor/outdoor event. No grills allowed or even needed in the Cow Palace parking lot as the Taco Trucks will roll in for festivities that begin at 9 a.m. The fun at the Cow Palace will include Raffle, Prizes, Arts & Craft vendors.

Additionally, the indoor lowrider show will be hosted and judged by “Lowrider Magazine” with a trophy presentation at 2:00 PM. The outside show will be judged by the People’s Choice. The hopping contest at 11:00 AM will be emceed by cultural icon Chinaman, a 24-year lowrider and professional hopper brickmaker.

Celebrating with a purpose, the San Francisco Lowrider Council has joined forces with the VACUNATE YA/VACCINATE NOW CAMPAIGN to protect people from the deadly Delta Variant COVID-19 virus. Free vaccines will be available and administered by the Department of Public Health.

Organized in 1981 to resist the San Francisco Police Department from the profiling of young Latino men and preventing them from cruising in their own Mission District Neighborhood, the San Francisco Lowrider Council was born out of adversity and has helped other social justice causes over the decades. Founder Roberto Y. Hernandez suffered 113 arrests and was brutally beaten several times by police who served under then Mayor Dianne Feinstein.

Rallying community Mission community leaders to form the San Francisco Lowrider Council, Hernandez and fellows filed a Federal Civil Rights lawsuit against the City of San Francisco, Mayor Feinstein, and the police department forcing the removal of several officers and the command staff of the SFPD Mission Station and ending the practice of using the Mission Station as the training ground for inexperienced police recruits. The lawsuit created the pathway for the building of RAZA Park and Mission Recreation Center plus the right to cruise on Mission Street.

The San Francisco Lowrider Council history is steeped in suffering, blood, sweat and tears as a trajectory of strong community service. Four decades of service include but are not limited to working with the United Farm Workers, Our Mission No Eviction, Close the Camps, Free the Children, Immigration Reform, Police Reform, Black Lives Matter & Justice for Alex Nieto. The Kings of the Streets event with a focus on keeping people healthy and safe has its roots in the immediate response to the 2020 as volunteers worked with the Mission Food Hub to provide nearly 10,000 Latino families, hardest hit by COVID-19 with weekly groceries.

The 40th Anniversary “Kings of the Streets” Lowrider Show participants can still join with a $30 registration fee for cars and $20 for motorcycles. General tickets for the event are $20. There is a $15 fee to park in the Cow Palace parking lot. Registration is necessary only for the indoor portion of the event.

About The San Francisco LowRider Council

The San Francisco LowRider Council was founded in 1981 to unite all LowRider clubs & solo riders to promote the art of LowRiding in San Francisco Bay Area. For more information, please visit: https://www.sanfranciscolowridercouncil.com/