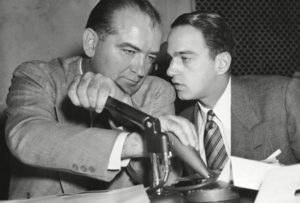 One of the most controversial and influential American men of the 20th Century, Roy Cohn was a ruthless and unscrupulous lawyer and political power broker whose 28-year career ranged from acting as chief counsel to Senator Joseph McCarthy’s Communist-hunting subcommittee to molding the career of a young Queens real estate developer named Donald Trump. Cohn formulated his playbook in the 50s, but it is all too familiar today: always attack; never admit blame or apologize; use favors and fear to ensure support for your objectives; expertly manipulate the media to gain advantage and destroy your opponents; lie shamelessly, invalidating the idea of truth; weaponize lawsuits; evade taxes and bills; and, most importantly, inflame the prejudices of the crowd by scapegoating defenseless people. Both, for those who remember Cohn and those who were too young to have any awareness of him, Matt Tyrnauer’s WHERE’S MY ROY COHN? lays out who Cohn was and how his lessons to his apprentice Donald Trump have shaped contemporary American politics. Cohn’s story from his birth in 1927 to his death in 1986, is a picaresque journey that carries us from the Depression, through the Red Scare of the 50s, to the 70s and 80s New York high life of wealth, celebrity, and Studio 54. Known for Tony Kushner’s fictionalized version of him in his Pulitzer Prize-winning play, “Angels in America,” Roy Cohn’s best known exploits include: secretly and unethically communicating with the judge to send Julius and Ethel Rosenberg to the electric chair; collaborating with Senator Joseph McCarthy’s anti-Communist witch hunt; spearheading J. Edgar Hoover and McCarthy’s crusade to hound homosexuals out of government; choreographing the New York State primary to split the vote and place Ronald Reagan in the oval office; spreading damaging stories about Geraldine Ferraro in 1984, scuttling her historic bid for the Vice Presidency; abusing the law to keep many of America’s murderous mafiosos out of jail; and looting the bank accounts of many of his legal clients. Cohn’s reputation as a flamboyant personality and courtroom pit bull drew the cream of Manhattan café society to him, from socialites and politicians to crime lords and a Catholic Cardinal. Despite his McCarthyite history and carnivore persona, members of the glitterati enjoyed his company. He had a large retinue of celebrity friends, including Andy Warhol, George Steinbrenner, and Aristotle Onassis. Cohn was a denizen of Studio 54, often accompanied by his male lovers, while adamantly denying his homosexuality to everyone. Cohn’s party finally came to an end when, disbarred and dying, his powerful friends, including his protégé Donald Trump, abandoned him. Cohn went out defiantly, refusing to admit he had AIDS, until the day he died of the disease. Even those who think they know everything about Roy Cohn will find much that is new in this deeply researched film, which utilizes a great deal of material never publicly seen. Those with little previous knowledge of Cohn’s story will have their eyes opened to the sizeable impact he continues to have on us, despite being dead for decades. By showing how America’s current divisions are rooted in dark areas of our past, WHERE’S MY ROY COHN? offers an illuminating portrait of where we are today. Directed by Matt Tyrnauer. 2019. DCP. 97 mins.
+ Google Calendar+ iCal Export