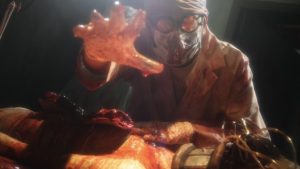 A corroded diving bell descends amidst a ruined city and the Assassin emerges from it to explore a labyrinth of bizarre landscapes inhabited by freakish denizens. An experimental, stop-motion film set in a Miltonesque world of monsters, mad scientists, and war pigs, this thirty-year-long labor of love is “a terrifying, disgusting, visceral, inventive, technically stunning piece of work, only partly relieved by bile black humour and the audacity of its vision.” – Sight & Sound.

‘Each piece of MAD GOD is hand crafted, independent and created from the heart. Sometimes that heart is bursting with love for the craft, while other times it’s macabre, punctured, and bleeding. Conceived and directed by , legendary visual effects and stop-motion mastermind Phil Tippett, from techniques & technologies that span the history of cinema, all sets, creatures and environments are handcrafted and shot at the Tippett Studios stage in Berkeley.
“Has there ever been such a combination of technical brilliance at the service of such a nihilistic vision? It’s like Pasolini made a Pixar movie… a work of a genuine visionary, and has all the makings of an instant cult classic.”
– Sight & Sound

Background:
A living legend in his field, Tippett’s work has featured in films such as JURASSIC PARK, INDIAN JONES AND THE TEMPLE OF DOOM, JURASSIC PARK, ROBOCOP, HOWARD THE DUCK, AND HONEY I SHRUNK THE KIDS, to name but a few. Tippett began work on the project following his stint on ROBOCOP in 1988. (Read More!)